THE PERFORMANCE | Forgive the selfishness of this request, but is there any chance The 100 might consider shoving that A.I. chip back into Raven’s head? Don’t get us wrong, we’re thrilled she survived the world’s riskiest game of Operation, but Morgan’s performance (both this week and last) as an erratic, Alie-possessed sociopath was so satisfying, we refuse to accept that it’s really over.

And let’s be real: Possession isn’t the easiest look to pull off. We’ve all seen laughable examples, even on some of our favorite shows. But Morgan crushed this challenge, resulting in a performance that was both emotionally devastating and physically unsettling. (Need we remind you of when Raven ripped off a chunk of Clarke’s flesh with her teeth?)

It was also an emotional bloodbath as Morgan’s character, now an eerie marriage of Alie’s mannerisms and Raven’s natural inner fire, gutted her comrades using each of their individual weaknesses. Her accusation that Clarke “broke [Finn’s] heart and shoved a knife into it” was particularly brutal — not to mention proof that this A.I. chip had done an incredibly thorough Googling of Raven’s history since last week’s episode.

Morgan had already impressed us with her touching portrayal of Raven’s disability struggles, but this latest achievement raised the bar once again. (Extra points for pulling this whole thing off with both hands tied behind her back!)

HONORABLE MENTION | “I did 17 years for a man whose real name I didn’t even know,” Cookie Lyon said to her ex-husband on this week’s Empire. But as Lucious went to his hometown of Philadelphia and filmed an autobiographical music video, Terrence Howard‘s deft performance made palpable the horrors he experienced growing up as Dwight Walker — and allowed us to feel unexpected sympathy for this monstrous music mogul. In one scene, as Lucious directed a young boy reenacting a moment where his mother attempted to drown him in a bathtub, Howard turned Lucious’ face into a frozen mask of panic and pain. Later, when he finally told Cookie that his bipolar mother had committed suicide in front of him, the actor’s halting cadence and tangible grief erased all of his character’s usual bravado, leaving us face-to-face with an innocent boy with a long way to go to heal from his trauma.

HONORABLE MENTION | In theory, the highlight of the Billions season finale should have been Chuck Rhoades and Bobby Axelrod’s long-awaited confrontation — and don’t get us wrong, that climactic scene was as intense as expected. But in execution, the episode was an even stronger showcase for Maggie Siff, who spent the hour expertly walking Wendy across an emotional tightrope. In the course of 60 minutes, Wendy went from appalled (when Axe blackmailed her and accused her of selling him out) to furious (while kicking Chuck out of the house) to cool, calm and calculating (while regaining the upper hand over Axe, seconds before quitting her job at his company). Siff used the subtlest of acting choices to carry Wendy through that roller coaster, and as her character drove off in that swanky new car, all it took was one facial expression for Siff to communicate Wendy’s mix of uncertainty and relief at her bold career move. We’re not sure where Wendy is headed in Season 2, but thanks to Siff’s remarkable performance, we can’t wait to find out. 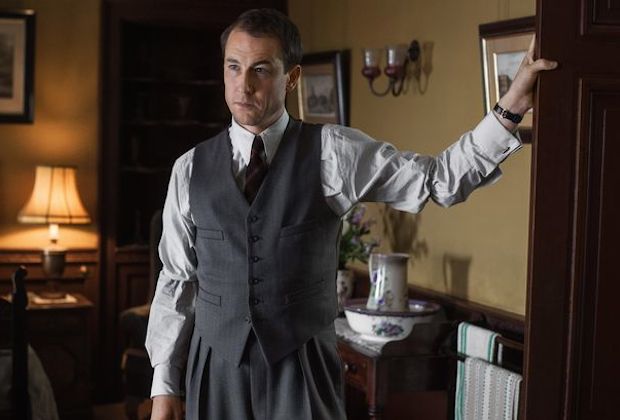 HONORABLE MENTION | We’ve previously honored Outlander‘s Tobias Menzies for his ability to play Black Jack Randall’s calculating cruelty with chillingly debonair ease. But we’re recognizing him this week for his turn as Randall’s descendant, Claire’s 1940s-era husband Frank, in the Starz series’ season premiere. Menzies was called on to convey pretty much every emotion in the spectrum as Claire suddenly returned after her mysterious absence; he layered Frank’s joy about his wife’s safety over tamped-down anger, sadness and confusion that all bubbled to the surface when she told him the truth about where she’d been… and to whom she’d been married. But the pinnacle of the scene for us was the nadir for Frank: Menzies looked absolutely over the moon upon hearing Claire was pregnant, then increasingly devastated as Frank realized there was no way he could be the baby’s father. It gutted us — in the best way — and made us anxious for the time Menzies shows up again (either character will do!) later this season.