Anyone else longing for the open, honest, what-you-see-is-what-you-get-ness of one Miss Sadie Stone?

Though it seems like ages since the singer-songwriter graced our screens, it was barely a season ago she and Rayna were riding around Nashville, belting “Gasoline and Matches” and eluding the paparazzi like Bennifer —Lopez, not Garner — in their prime. Sure, Sadie had a teeny secret (with big, stupid fists) and wound up (accidentally!) killing that secret in a parking garage, but otherwise, she seemed like good people.

I bring her up in light of this week’s episode, which finds two relatively new Music City females going absolutely Chiquita-bananas loco. Add to that Layla’s prolonged, amorphous and rather wackadoodle revenge plan — best I can tell, her endgame involves mooning over Avery until he succumbs out of sheer boredom —  and can you blame me for reminiscing about Sadie’s sweet, simple sanity?

On the upside, Maddie gets yelled at during the hour, and that’s always a good time. And Kevin’s back! (For a hot minute.) Read on for the highlights of “When There’s Fire.”

GUNNAR GETS CHASED | Let’s start with The Exes, who arrive in Dallas all psyched about opening for Autumn Chase. That is, Scarlett and Gunnar are jazzed until they witness the country superstar hug them hello in one breath and then publicly shame one of her guitar techs by firing him in the next. Ah, I see: Autumn is terrible-crazy, not fun-crazy. Got it.

Working off their manager’s advice to just go along with whatever Autumn says, Gunny and Scarlett smile and nod through a dinner where she pries into their past, eventually getting Gunnar to admit that he proposed to Scarlett and she turned him down. It’s awkward, but Little Miss No Filter doesn’t seem to notice or care, and she goes on to spread the story among the crew after the Dallas show.

Finally, Scarlett’s had enough, and she gently yet firmly asks Autumn to quit it. The older woman flibbertigibbets all over herself apologizing, and then Scarlett starts apologizing in that way that most women (including myself) do which is SO INFURIATING. And even though Autumn acts like everything is totally cool — going as far as thanking Scarlett for speaking her mind — the way she flirts all up on Gunnar later is problematic, methinks.

FOR BETTER OR WORSE | Juliette is getting sued by the Stephen Spielberg movie that employed her for five minutes, but she doesn’t care, because she’s happy with where things stand with Cadence. However, she does miss performing and recording, but she needs a manager to help restart her get her music career. She gets all dressed up and visits Glenn, but he disregards all of the adult-ing she’s clearly doing — just look at that updo-turtleneck combination! — and kindly informs her that he can’t work for her anymore.

After lamenting her situation to Avery (who is in NO way talking about his own situation when he says that Glenn “doesn’t hate you, Juliette. I think you hurt him, and he’s protecting himself”), she enlists Mr. Barkley and the Grand Ole Opry in a ruse that involves her performing a song dedicated to Glenn on the Opry stage that evening.

The tune, “Hole in the World,” is a sad one that at first angers, then moves The Toupeed One to find space in his heart for one more try with his troubled surrogate daughter. “If you can’t be my manager, just please tell me that you’ll be in my life,” she says tearfully. “Maybe I’ll do both,” he replies, just as wetly. No, YOU’RE crying! 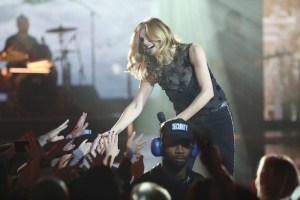 RAY ON THE ROAD | When no touring act will add Layla as an opener, Rayna comes up with what she thinks is a great idea: She’ll do a 10-date tour, which will give the struggling Highway 65 artist a platform from which to promote her first album. And after doing a one-off duet with Autumn at the Dallas show, Rayna is literally ready to rock-n-roll and get back out on stage. She even gets Deacon to agree — rather, she informs him that he’s coming along on tour with her — but it appears that Layla has made other plans. (Don’t worry, Rayna still wants to hit the road.)

Back in Nashville, Layla combs her bangs and goes to Luke’s office, where she sobs/blackmails him into taking her on as his opening act. But what about Riff? Oh hey, don’t sweat it —he acted erractically, packed a bag and took off, and his panicked wife doesn’t know where he is.

CASHED OUT | Cash implies that Maddie should sneak out and play a gig to feel less “trapped,” then puts up only the smallest resistance when the teen (understandably) thinks that’s an awesome idea. So Mads lies to Deacon that she’s going to a “coffeehouse,” then puts on a little black dress and takes the stage at a bar Cash sneaks her into. The song she performs makes her sound like a little girl teetering around in her mother’s heels (sample lyrics: “I’m a bad girl, I’m a real bad girl”), and when Daphne narcs, Deacon shows up at the bar like DEKE SMASH!

Before you can say “grounded for life,” Deacon has his defiant daughter by the arm and is hustling her out to the car. Cash follows and screams at Deacon. “You don’t even know her!” the blonde shrieks, prompting Deke to warn her, “You need to stay the hell away from my daughter, or you will regret it.” The look that then passes over Cash’s face bodes something — I’m not sure what it is, but I’m sure it’s not good.

THE ONE THAT GOT AWAY | Luke has Will spend a day writing with Kevin. Kevin has a boyfriend. Will is sad about it. They argue a little, then almost cry a little, then admit that they loved each other. Side note: I would’ve watched these two snipe at each other, field calls involving the word “pinot” and write on yellow legal pads for the entire 45 minutes of tonight’s show. THAT IS HOW MUCH I MISS KEVIN WITH WILL.