Summon your inner Beyoncé Pad Thai, because you’re going to need her to handle the emotional fallout from The Mindy Project‘s midseason premiere.

The episode, which became available on Hulu Tuesday, saw Drs. Lahiri and Castellano going to couples’ counseling, postponing their wedding multiple times, then eventually canceling the nuptials and breaking up for good. The main cause? Their difference of opinion regarding Mindy’s career: She wanted to pursue her fertility clinic and egg-freezing program, while Danny thought she should stop working in order to be a stay-at-home mom for their son, Leo.

In the wake of the episode, we had lots of questions about life, love and “leashing.” (You’ll get it once you see the ep.) Thankfully, series creator/star Mindy Kaling answered those queries via email. Read on for her answers.

TVLINE | Talk to me about the decision to split Mindy and Danny up for real. Why was now the right time to do it?
I think opposites attract, but opposites can also have trouble making a home together, especially if they have big, confident personalities. After struggling to make it work, this felt like the most realistic thing that would happen for two parents.

TVLINE | Will we find out where Danny’s working, now that he’s left the practice?
Yes! We have a very funny upcoming episode that shows the audience where Danny works. 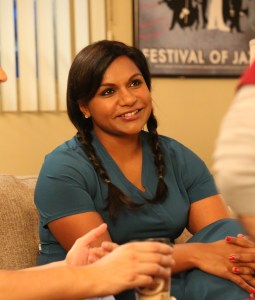 TVLINE | Do you think Mindy had gotten away from who she wanted to be while she was with Danny? In a similar vein, why do you think Danny had gotten so intense about Mindy staying home with Leo, given that she’s always been hard-core about her medical career? (I’m thinking back to that delivery in the pilot, which was badass.)
I’ve noticed that lot of times what makes one person attracted to someone else becomes the very thing that drives them apart. I think for someone like Danny, he is impressed by Mindy’s skills while they were friends, but what he needs is someone who doesn’t do exactly what he does. But that can still change! I don’t want to give away too much.

TVLINE | How would you describe the dynamic between Mindy and Danny for the rest of the season?
Those scenes have been so juicy! The source of our funniest new stuff is Mindy and Danny’s different parenting styles. Two people who love each other, are attracted to each other, but know they are volatile together are so fun to write, and even more fun to act.

TVLINE | Is Mindy going to be living in her apartment for the rest of the season?
Yes, and I’m so excited about it. It’s one of our best sets, and I’ve missed doing scenes in there.

TVLINE | Will we meet any of the women Danny is dating?
One of the best parts of this season is writing and casting women for Danny to date. Mindy watching her ex date again and trying to be cool with it — and failing — is so relatable.

TVLINE | How did Seth Meyers’ return to the show come about?
We love Seth so much, and when we came up with the idea of “leashing,” we thought it would be perfect for Seth and his dog, Frisbee. I always have a special place in my heart for Seth, because he was one of our first guest stars.