Is Grey’s Anatomy‘s Callie pondering a major move? Will a S.H.I.E.L.D. duo find time for love amid war? Will The Flash unmask another mystery man? Is Grimm setting the stage for -Biest Fight Round 2? Read on for answers to those questions plus teases from other shows.

I’m guessing that on Grey’s Anatomy, Callie will want to take Sofia and move across the country to be with Penny, and that’s what will cause the Calzona tension. Please tell me all is not lost for Calzona.—Ashley
I can tell you that you are an A-plus guesstimator, because Callie will indeed mull moving to New York with Penny. But what’s interesting is that as she ponders that big decision, I hear she will take into consideration not just its potential impact on Sofia, but on Arizona, too.

I’ll take anything you have on Grimm! —Jen
The preview of this week’s episode teased an Adalind-Eve run-in, but Bitsie Tulloch tells us that the veterinarian-turned-assassin isn’t worried in the slightest. “Oh, Adalind doesn’t have a chance!” she says. “Eve is so powerful at this point that she could just look at somebody and make their head explode” (which, you’ll recall, actually happened in Episode 7 of this season). During the upcoming exchange between Nick’s women, “There’s a little bit of a threat going on,” Tulloch adds. “She’s saying, ‘I know exactly who you are and what you are, so watch your back.’ But she doesn’t touch her, just leaves her alone… Eve’s not going to waste her time with Adalind at this point.”

The FitzSimmons relationship has been on Agents of S.H.I.E.L.D.‘s backburner so far in Season 3B. Will they start to get more plot soon? I mean, I’m all for the slow burn, but I’m getting antsy for some kisses here, or at the very least some sexual tension. –Lulu
This week’s episode doesn’t allow for much FitzSimmons alone time, centered as it is on Gideon Malick’s increasingly uneasy “association” with Hive and an explosive side mission for Daisy/Lincoln. But come April 19, circumstances may prompt one of the team’s science whizzes to second-guess their decision to “start over.” 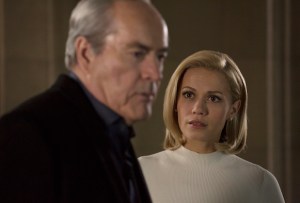 Agents of S.H.I.E.L.D. that doesn’t involve Fitz or Simmons? —Emily
People, you are ConFuSiNg Me! Tonight’s episode features an epic 1-on-1 throwdown between May and Hydra goon Giyera, a dark reveal from Lincoln’s past and much more of purty Bethany Joy Lenz.

I’m looking forward to the return of my fave summer shows, so I would love any scoop you have on Zoo, The Last Ship or The Strain. –Michelle
I choose… Door No. 1, because I have learned that Season 2 of CBS’ animals-gone-wild series is adding the recurring character of Allison, the charismatic senior advisor to the Secretary of Agriculture who shares a surprising history with Billy Burke’s Mitch.

Any teases on the identity of The Flash’s Man In the Iron Mask? –Arlena
When asked about the masked man in Zoom’s crib, Teddy Sears assured me, “We do see him” during this season’s final stretch, “but I didn’t know who he was until [filming] the finale. Some of the actors will tell you, ‘We had ideas about who it is,’ but if they did, they knew a lot more than me! But [his identity] will be revealed, and I think it will be very satisfying to viewers.”

While I cross my fingers 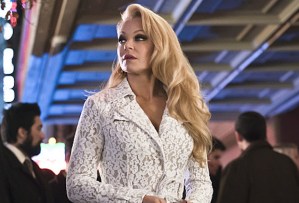 and wait for Arrow’s Charlotte Ross to also become a series regular, do you have anything to share about #SmoaknLance? —Trish
Donna will “definitely play a role” in helping Quentin cope with Laurel’s death while also avoiding the bottle, says showrunner Wendy Mericle. “We’ve seen him go off the wagon in the past, and what we really wanted to explore was: How would he want to honor his daughter’s legacy? That will be the question he has to ask himself and answer in the next few episodes.”

Will Felicity’s father make another appearance on Arrow before the season is over? —Cindy
Yes, Everwood alum Tom Amandes will reprise his role as Noah Kuttler aka The Calculator in a couple episodes as Season 4 winds down.

Is Netflix’s Marseille going to be in French (presumably) or in English? —Will
You presume muy bien, as my failed-French-in-high school self would say. The Gerard Depardieu-led original series will air en Francais but with English subtitles.

Will Parker Booth return again on Bones this season? —Carrie
Yes, Booth’s boy will pop up in Episode 16, which will air sometime in May.

Any chance we will see Bones’ Daisy and the baby anytime soon? —Anna
As a matter of fact, Carla Gallo will reprise her role as Sweets’ widow :*-( in Episode 21, which should land somewhere in July.

Any news on if Charlie is 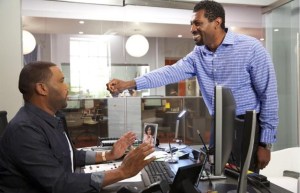 coming back to black-ish? I miss his cray-cray self. — April
Indeed he is. Exec producer Jonathan Groff confirmed to TVLine Sunday at our sister site Deadline’s Emmy Contenders event that Deon Cole would be back for not one, not two, not three but four episodes later this season. It’s unclear if this next scoop is related, but look for Dre’s (Anthony Anderson) employment situation to become considerably less secure.

Do you know when new seasons of Poldark and The Great British Baking Show will air on PBS? —Amy
Poldark should return sometime this fall, I am hearing, while there is no news at this time about TGBS.

Too soon for any Rush Hour scoop? —Lianne
Justin Hires recently shed light for us on what Pretty Little Liars’ Janel Parrish will be doing when she guests on the freshman drama later this spring, saying, “She plays someone who’s in Witness Protection, and we’re trying to keep her alive because some people are out to kill her. That’s a very exciting show.” And we shall believe him.

We know that Michael Weatherly has been filming the pilot for his new series Bull, but it has gone quiet about Cote de Pablo and her potential new show, Prototype. Do you have any further info? –Pete
Syfy pilot’s about three unlikely people who inadvertently stumble upon an invention that challenges the very nature of quantum physics, and which also stars Jack Davenport (Smash), is currently in production in Los Angeles.

I would love to have a list of summer shows by networks! Please include TNT, USA and other cable networks! Thank you so much! –Judy
What, something like this from 2015? I should have that up by… May?

Real questions, real answers. If you need the Inside Line on a favorite show, email InsideLine@tvline.com!  (With reporting by Kim Roots and Ryan Schwartz)