For the second time in two weeks, Sleepy Hollow has killed off one of its central characters. And just like Joe Corbin’s tragic demise, showrunner Clifton Campbell tells TVLine in an exclusive post mortem, the death is going to stick.

If you didn’t see the episode, here’s a brief, devastating recap: Abbie stepped into Pandora’s box, ending her own life in order to save the world from The Hidden One’s tyranny. Jenny killed the weakened god, which angered Pandora, who then decided she wanted to rule the world herself. Ichabod stopped her by summoning The Headless Horseman, who dealt her a fatal blow. As she died, the goddess revealed to a horrified Ichabod that Abbie was truly gone forever.

When the box eventually blew up, it knocked Crane out; while he was unconscious, he and Abbie re-lived several scenes from their partnership, starting with the cell from the pilot and ending sitting side-by-side on the porch swing. She told him she was at peace and had taken him as far as she could. “Honor our bond and be brave, be strong. I know you will be. You’re my guy, always,” she said. He kissed her hand, then bowed… and when he straightened up, she was gone.

A scene at the end of the episode found Ichabod getting a graveside debrief from Ezra: Abbie’s death will activate another Witness, whom Ichabod has to find before a government organization — headed by the FBI’s Jack Walters — does. And just then, Walters and some official-looking black SUVs showed up and asked (read: demanded) that Ichabod come with them, which he did.

If you’re wondering, the answer is yes: Sleepy Hollow was the series referenced in TVLine’s most recent blind item. But we had as many questions as you do regarding Abbie, Crane and what the show might look like if it’s renewed for a fourth season. So we took all of our queries directly to Campbell — read on for his answers. 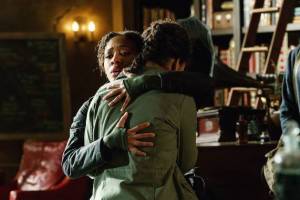 TVLINE | I’m going to jump in with the big question first: Is Abbie really dead? Is this the last we’ll see of her?
The character of Abbie Mills makes the supreme sacrifice to save the world, and her character dies in the season finale, yes. To answer the second part of that question, she will not return to the show as Abbie Mills. There’s certainly the possibility, given our really good relationship with Nicole and how much she’s help build us these past three seasons, that reflections of her will be around and that the idea of her will be around is certainly something we’ve all talked about, but not as the character of Abbie Mills.

TVLINE | So is Nicole Beharie no longer with the show?
Nicole Beharie as Abbie Mills is no longer with the show. The character is dead. But we’ve had a terrific run with her. She’s been an absolute delight. She helped build out the mythology of the show, and we’ve had a tremendous run with her. The character is gone and, like I said, in Sleepy Hollow it’s always surprising to see how the reflections of one character or another can influence the show moving forward.

TVLINE | Ichabod’s grief over what happens is palpable, but I was struck by how Tom Mison played it contained. Did you think about Ichabod having a big emotional moment after he realizes she’s gone? Did you shoot any takes like that?
Listen, Tom has really created this character from the bottom up. His instincts are without parallel. His fearless creation of this character in all of these moments, particularly as they pertain to his relationship with Abbie Mills, is not something any of us would second guess. You picked up on that contained emotion — I think this is such a big moment, and a huge loss in his life and his world that he needs to process. At a point where we have that opportunity in the finale, he hasn’t quite reached that point yet.

TVLINE | I loved the callbacks to the earlier seasons: The Headless Horseman, August Corbin, “Sympathy for the Devil” and even some of that crazy camerawork. Why was it important for you to get those into the episode?
To show the audience how we respected her story. These were the people that brought her into the world of Sleepy Hollow, and it felt much more honest and organic if she went out the way she came in.

TVLINE | Similarly, the scenes that recreated the moments in Abbie and Ichabod’s friendship — were there any you or [episode writer] M. Raven Metzner wanted to squeeze in but didn’t have time for?
There was just no real time. It was, obviously, a very big episode, the conclusion of the season’s big bad, and setting the world right and pushing off the evil, that takes up a lot of real estate… Raven chose absolutely fantastic moments to get the audience a sense that her world had come full circle.

TVLINE | The love between Abbie and Ichabod is pointed out a few times during the finale. As I know you are well aware, that type of relationship between the Witnesses is something fans either really want to happen or really don’t want to happen. Did you have any concern about making it a focal point of the episode?
It’s impossible to not see the love between these two. It’s palpable. The chemistry is there. We always felt it was much more in the vein of a level of intimacy that even goes beyond the physical. And that’s how they pretty much played it from the beginning. Tom and Nicole have been very articulate and instrumental in crafting their partnership and their relationship. They felt much more comfortable loving each other deeply the way we portrayed them than taking it one step further.

Having said that, there’s every reason to hold in your heart that their love is enduring and that the intimacy part really wouldn’t have made that stronger. The looks they give each other, the thoughtfulness and respect they show each other is greater than any love we could ever have conceived. They gave that to us, and we wanted to respect that right to the bitter end.

TVLINE | Can you confirm that this is Zach Appelman’s last episode with the show?
Well again, this is Sleepy Hollow. Joe Corbin, as we know him, has died. Honestly, we don’t really know…

TVLINE | What can you tell me about the group that Ezra mentioned to Ichabod in the graveyard at the end of the episode? How might it manifest next season?
That’s our way in to a Season 4 that looks forward to the different understanding about what being a Witness is all about. We ran the clock out on both Abbie’s Witness relationship and how she was instrumental in bringing Ichabod into this world, and understanding and giving context and framing to what it meant to be a Witness. Then her job was done, and she did what all Witnesses apparently do, which is to pass the essence of their soul on through the bloodline. The organization… is something we’re exploring should we be fortunate enough to have a Season 4. 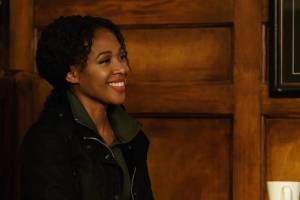 TVLINE | Having Abbie sacrifice herself twice in the same season — fans might think, “Well, you brought her back last time…” What’s the fundamental difference between her going into the tree and her willingly entering Pandora’s box?
Well, she knew she wasn’t coming out of the box in the finale. She knew, because of what they learned in the catacombs, that the box was missing its hope, which is at the center of darkness and gave it context, gave it form. She knew she was giving herself to the box… that that meant she would not be coming back.

At the midseason break this year, it was more immediate. The Shard of Anubis was going to blow; her sister and Crane and everybody in close proximity could suffer catastrophic loss. Abbie knows she’s giving her life up at the end of Season 3 to save the world. The difference is, from the audience’s perspective, is [at the midseason break] she had fallen into a realm that we didn’t know about. She didn’t die.