What’s the opposite of the Welcome Wagon? The Get Out Jalopy? The See Ya Subaru? The Hasta la Vista Haycart? Because that’s what greets Juliette when she (finally!) returns to town in this week’s Nashville. Even worse, a red-eyed, out-of-empathy Avery is behind the wheel.

The old Juliette might’ve reacted to this rebuff in a number of ways. She could’ve fired him… then fired whatever employee of hers pointed out that Avery wasn’t on her payroll. She could’ve run out and slept with the closest, least appropriate person in the immediate vicinity. (RIP, Jeff Fordham.) She could’ve at least broken a very expensive piece of glassware.

What’s so disheartening about JuJu’s reaction to her ex-husband/forever soulmate’s feigned ambivalence about their relationship — not to mention his outright disdain for her ability to be a dedicated mom — is that it’s all so quiet and adult and bloodless. Maybe I’m being a pessimist; perhaps the lack of raised voices and verbal kill shots means Cadence’s folks are moving toward a shared understanding. But I’d rather they moved toward a shared bed, which is a veiled way of saying PLEASE GIVE ME JAVERY BACK, Nashville. Amid Layla’s heartbreak and Deacon and Rayna sharing one (!) scene in this episode, I need a win!

Read on for the highlights of “What I Cannot Change.”

BABY STEPS | Let’s start with the most important aspect of the entire episode: the cuteness of the babies who play little Cadence. They are so deliciously adorable, they make me and my ovaries want to write checks that my one-bedroom New York apartment can’t cash. But can you blame me? Those little kiddos are acting, people. Just try not to melt when the baby actively hugs Juliette and smiles her goodbyes in that opening scene at the rehab center. Anyway, the doc that annoyed me in the last episode says it’s time for her to head home, and Juliette happily complies.

But back in Music City, Ms. Barnes returns to an empty house, tons of unopened mail and an offer of a cameo in a Steven Spielberg movie. She’s psyched about the opportunity… until she realizes that shooting it in Europe means she’ll miss out on two weeks of Cadence time. So she rules it out. But when Avery refuses her request for increased time with their daughter, Ju reconsiders and accepts the part. 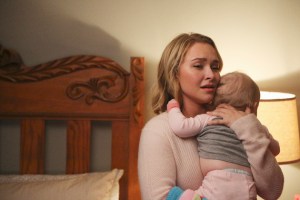 And because Avery is so clearly still in love with the petite pile of problems, he allows her to come back and put Cadence to bed before she jets off the next day. Juliette softly sings the baby to sleep (again with the hugging!), while Daddy works on another chapter in his memoir, Crying in the Hallway: The Avery Barkley Story.

FILM VS. FAMILY | At the movie’s press conference in New York the next day — side note: Do movies hold press conferences before production has even begun? — a question from a reporter prompts Juliette to admit that she’s been in a bad way since Cadence was born. So she comes clean about rehab and her failed marriage, then abruptly backs out of the part, saying “I need to be with my daughter right now.” That’s sweet and all, Ju, but you do understand what a contract is, right? We’re talking about Spielberg here, which leads me to believe you’re about to have close encounters of the legal kind.

Back at home later, Juliette opens the door to see Avery there, saying she can have more time with Cadence. She tells him she didn’t give up the role to change his mind, and he responds that he didn’t change his mind because she gave up the role. They smile a little, and that’s something, right?

LAYLA LAID LOW | This week, in the extended sad trombone sound that is Layla’s life, she plays an amazing showcase set at Highway 65 — her song, “The Book,” is really, really good — and impresses country star Autumn Chase so much that the two make plans to talk business at the Exes show at The Bluebird later that night. But when they get there, Autumn is so blown away by Scarlett and Gunnar, she hires them as her opening act. Wah-wahhh. And then when Layla calls Avery, crying, he’s too busy mending fences with Juliette to pick up, so Layla ugly-cries on her bed, alone. Wah-wahhhh-wahhhhhhhh.

HEALIN’ DEALIN’ RECORDS | Will is planning to release his own, independent album, but he needs Luke to release the hold he has on the tunes Will wrote with Kevin. Or, you could just call Kevin, tell him you love him, make up and write more, Will. Just a thought.

But Luke is preoccupied by Colt’s insistence that his dad sign the parental consent forms so he can join the Army. Luke initially is dead-set against it, but a talking-to from the boy’s grandfather helps change his mind, and Luke acquiesces so his Maddie-deflowering son can enlist. And when Will demands that Luke give him back his songs, Luke instead offers Will his old Wheelin’ Dealin’ contract back. I give Luke a ton of grief in these recaps, but it’s a nice moment when he apologizes for yanking Will off the label months back. “I’ve come to realize just ’cause something’s hard or scary doesn’t mean you shouldn’t do it, especially if it’s something you believe in,” Luke says, moving Will to tears as they shake on it, “and I believe in you.”

MEANWHILE, AT RAYNA’S… | I am sad to report that Rayna and Deacon’s only time together in the entire episode takes place at the very end, as they recap their recent woes to each other while cuddling on the couch. His update: The day after celebrating his 15 years of sobriety, Frank took The Beverly’s stage drunk, had to be hauled off by Deacon, and said some mean things to his business partner before sleeping it off. The next morning, he apologized, but Deacon noted the truth of the angry words and admits he “got caught up” in making the venue a hit and “steamrolled” his AA sponsor in the process. For the love of Connie Britton’s storied cinnabar tresses, Deke, please see this interlude for the cautionary tale it is and GET OUT OF THE BAR BUSINESS.

Her update: She’s frustrated that the cops can’t find Vita, and sad when a local detective informs her that girls like the missing homeless singer/songwriter often “just disappear.” (Side note: I also love how the detective is the one person in all of Nashville who isn’t wowed by Rayna’s name or presence. Stay hard-boiled, my friend.)