If Quantico‘s Alex Parrish were a prescription drug, her FDA-mandated side effects label would read:

WARNING — Prolonged proximity to this woman (and her shampoo-commercial hair) may cause belief in conspiracies, temporary and/or permanent delusions, paranoia, a broken heart and the end of a path to which you’ve devoted your entire life.

And if Hannah Wyland had known that casting her lot with the problematic Agent Parrish would end the way it does in this week’s episode, we like to think that she would’ve given a monologue that ended in “… oh HELL no” and turned to make as speedy an exit as possible in her chic-on-a-government-salary heels. Alas, she didn’t, and she pays the price.

Let’s review what happens in “Clue.”

TIME TO TELL | We pick up where last episode left off, with Hannah now in the loop but no less pissed — about Alex lying to a congressional committee, sneaking a bomb-clad Natalie past FBI metal detectors, stealing classified information from an FBI server, etc. “I had no choice,” Alex counters, defiant, as I wonder: Isn’t Alex afraid her house might be bugged? And if she isn’t, shouldn’t she be?! Hannah says their next move has to be to bring the FBI director up to speed, but Alex adamantly counters that it’s a bad idea.

Later, at work, Hannah grudgingly agrees not to say anything for 24 hours, with the caveat that she’s taking the lead on the investigation. So when they get word that Sen. Haas’ schedule has abruptly changed, Hannah and Alex assume that the terrorist will strike before Claire leaves town. They both join the senator’s protective detail when she visits Columbia University, but after Hannah manhandles a suspicious EMT (who’s later revealed as totally benign), Claire demands that Hannah’s superiors keep “that violent woman out of my sight.” So Miranda (!) takes her off the campaign, but Hannah decides she still needs to be at a town hall event that night.

MISSED ‘EM AGAIN! | Hannah also decides that she’s tired of waiting for the terrorist to call the shots, so she emails him/her/it, and gets an immediate phone call in reply. New mission: Place a sealed envelope under a specific seat in the town hall’s auditorium, which Alex does while she and Hannah discuss Ryan via the FBI-issued earpieces they’re wearing. (Wait, are you two on a secure line? Isn’t pretty much every agent in the building listening in?)

Hannah is just telling Alex about how “nothing would make [Ryan] happier than you sitting down and telling —” when the man in question confronts Alex, angrily asking her what she placed under the seat. Hannah intervenes, Ryan storms off, Simon calls and says the chip in the envelope was likely something that could knock out all the power in the surrounding area… and when Alex checks, the envelope is gone. (Side note: Whyyyyyy weren’t Alex and/or Hannah keeping an eye on that seat?) 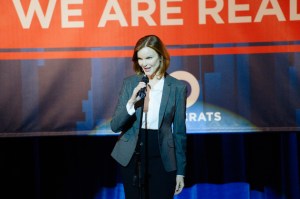 Of course, soon after Claire comes out on stage, all of the lights go out. In the melee that follows, Hannah thinks it’s best to fire her gun overhead in a room full of people losing their ish. Is it any wonder that she’s suspended from active duty? On her way out, she asks Alex not to bring Ryan into the insanity, because “He needs to sit this one out.”

Not a problem, Hannah! It turns out that Agent Booth now thinks that Alex set Hannah up, and so now he’s gunning to take Alex down himself. Weren’t they just exchanging sappy “I just wanted to hear your voice”-type conversations the other day?

The terrorist calls at the end of the day, and Alex can’t figure out why he/she/it isn’t mad that Claire didn’t die. But then Simon helps her realize that someone broke into a Columbia lab located under the theater during the breakout. Per Alex, this intel is their “first real clue.”

PROCESSING IT ALL | Back in the Quantico days, we see Liam step in to take over while the Office of Professional Review is looking into Miranda and the incident at her house. Because every lesson at the academy has to be a Lesson, he uses a plane-set terrorist scenario to point out to the NATs — who, you’ll recall, have just lived through a real-life terrorist attack — that some situations are lose-lose (aka a “kobayashi maru”), no matter what you do.

But before we get there, we watch the recruits do a whole lot of acting-out. Shelby crawls naked into Caleb’s bed (while Will’s sleeping on the other side of the room!) and tries to jump him during the class exercise; she’s messed up about learning about her parents, but she won’t admit that until much later in the episode.

Alex and Drew fight. Alex and Liam fight. Alex tries to get the best of the terrorist situation with a gun in each hand, and the move is so John Woo, I half expect pigeons to burst out of the seatback pocket in front of her. Alex realizes that she can’t do everything alone. 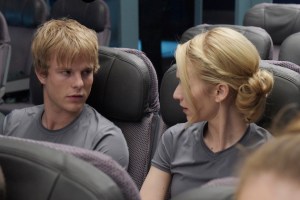 Caleb’s Systemics plan hits a snag when he realizes that someone he knows is now the head of the cult — which means that he can’t infiltrate under an assumed name, because he’ll be recognized. So Will steps up and volunteers, saying he’s got motive: His Christian Scientist father’s beliefs eventually led to his sister’s death. So Caleb agrees… then calls his dad to brief him. So Clayton is in on this?

We learn where Raina was on New Year’s — with Simon! — and the twins argue about what to tell OPR about Miranda’s involvement in their infiltration of the terror cell. It turn out all to be for naught, though, because Miranda tells investigators the whole thing was her idea. When she addresses all of the NATs at the end of the episode, she tearfully tells them, “It is time for me to say goodbye as your teacher, for now, at least.” Everyone looks shocked, but that’s nothing compared to how gobsmacked Alex is going to be when she learns that Liam is bringing Ryan back to teach!