The longing is understandable. After all, the Outlander star spent most of the Starz drama’s first season running around the Scottish highlands in Jamie Fraser’s airy ensemble, and those kind of threads can grow on a guy.

Season 2, which premieres April 9 (9/8c), plucks Jamie and his time-traveling wife Claire from Scotland’s rough countryside and sets them down in Paris, where they’ll work to thwart a royal-wannabe’s doomed play for the British throne.

“When we got to Paris, we realized it’s a completely different world. The costumes, the sets — it’s more voluptuous. It’s more luxurious, but more constricted,” Heughan tells TVLine.

One side effect of living in the cosmopolitan City of Lights? Au revoir, plaid; bonjour breeches. The actor adds that it wasn’t until the production returned to Clan Fraser’s stomping grounds later in the season that he felt at home.

“When we got back to Scotland, it was like just breathing a sigh of relief, really,” he adds. “It was nice to put the kilt back on. I remember the first day, I was like, ‘God, do you even remember how to do this?'”

Even if there is a pleat or two out of place in Heughan’s costume, it’s not likely viewers will mind; with nearly a year between seasons, fans are all but doing Murtagh’s sword dance with anticipation at what Book 2 of the adaptation will hold. Dinna fear — we’ve got scoop on all of the intrigue (who is Le Comte St. Germain?) and intimacy (pregnant sex!) ahead, straight from Heughan and his leading lady, Caitriona Balfe.

AFTERSHOCKS | Jamie’s rape and brutalization by Jonathan “Black Jack” Randall at the end of the first season is “not the primary focus of Season 2, but it’s there,” Heughan says. “Distance and time certainly is letting him heal, but he’s still plagued by it.” Jamie throws himself into befriending Prince Charlie, who is interested in forcefully establishing his family’s rule of Great Britain; the mission is good for Fraser’s psyche, but not so great for his marriage. “He’s not really come to terms with [the rape], and that comes to a head at some point,” Heughan adds. “He needs to find a way out, a way to deal with this, and the way he does will be revealed.”

Meanwhile, Claire is left hoping that her husband will eventually let her in on his anguish. “What people forget about sexual trauma is that it doesn’t just affect the person that it was done to,” Balfe says. “It affects their entire network.”

A WOMAN’S WORK | Speaking of the lovely Lady Broch Tuarach, Balfe says this season her 20th-century character chafes at 18th-century gender conventions even more than she did in Scotland. “As a woman being relegated to the drawing room to gossip with women when she knows that they’re trying to attempt this great political maneuver and intrigue — and she can’t be any part of that because of the way society is laid out — she feels quite impotent in a way.” 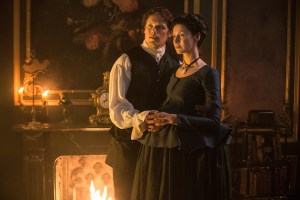 HELLO MOTHER, HELLO FATHER | Viewers will recall that Claire announced her pregnancy as she and Jamie set sail for France in the Season 1 finale. As the trimesters tick by, the Frasers deal with impending parenthood in different ways. “In the books, [Jamie’s] very gung-ho about it,” Heughan says. “But I think there would be, certainly at the time of birth, I would think he would probably be absolutely freaking out about it… I think he probably won’t be quite as brave as he thinks he is.” Claire, too, isn’t so sure of herself in this arena. “There’s the excitement, but there’s also a lot of trepidation because she doesn’t have a strong mother figure in her own life,” Balfe says. “It’s an unnerving time for her.”

BUMP ‘N’ UGLIES | Despite their fears about first-time parenthood (or maybe because of them), the Frasers still spend a good amount of time in bed this season — which required the series’ prosthetics department to give Balfe a belly akin to the one Lotte Verbeek sported in the naked forest-dance scene last year. “It’s funny, I think sometimes in television, people can be scared of, ‘Oh, we can’t have pregnant people having sex,'” Balfe notes. “Sam and I really fought for this love scene that included the bump.” After all, “A lot of pregnant woman that I’ve spoken to are very sexy, very sexual and womanly when they’re pregnant, and men find them attractive,” she adds. “It should be a time to be celebrated. So we hope we did that justice, as well.” 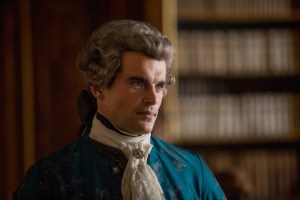 A NEW ENEMY | Early in the season, the Frasers run afoul of Le Comte St. Germain (played by French actor Stanley Weber), who quickly develops a strong hatred of Claire. “She’s made a pretty ferocious enemy,” Balfe concedes, teasing that the villain is “possibly a lot darker than we first thought.” Heughan calls St. Germain “a dangerous adversary — a very charming one, as well” whose political savvy makes him an even more lethal opponent. Look for that thread to play out “throughout most of the season,” he adds. — With reporting by Vlada Gelman

Are you excited to see what Claire and Jamie are up to in Season 2? Let us know in the comments!