Welp, they can’t all be Jewel, am I right, Rayna?

When Vita, a down-on-her-luck car-dweller with a celestial voice showed up in last week’s Nashville, she seemed like Highway 65’s next big thing: a rough piece of rock just needing the some time at Rayna Jaymes’ Home for Emotionally Needy Female Artists to polish her into the label’s next gem. But in this week’s installment, she’s revealed as a thief (!), a liar (!!) and someone whose enemies think arson is the best way to send a miffed message.

Meanwhile, Riff is so rusty after decades out of the spotlight, he lashes out at Luke rather than admit that his skillz may no longer pay the billz; Maddie’s infatuation with Cash is getting a little weird; Avery goes on a date; and Deacon literally drives his business partner to drink. Read on for the highlights of “If I Could Do It All Again.”

METHINKS HE DOTH PROTEST TOO MUCH | Riff joining Luke’s tour has the intended effect: All of the tickets sell out, and Mr. Global Brand himself can’t wait to go wheels-up. Two problems quickly arise, though. 1) Riff is really out of practice at performing. 2) Riff is a really big jerk about it, blaming Luke’s band for his shortcomings and getting personal when his old friend tries to address the situation. He sniffs that he’s not going to practice with the guys for an upcoming show at The Beverly because he’s expected at his kid’s soccer game and “Unlike your kids, mine like having me around.” Wheelin’-dealin’ burn! 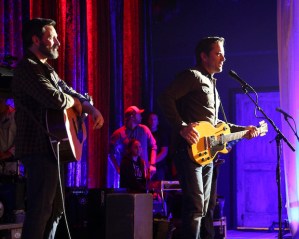 When Riff’s ego calms down, he admits to Luke that he still wants to go on the road, but he needs a lot of help getting back to the level of performance he was at when he retired. I hope Luke is paying his musicians top dollar, because they spiff Riff up until he’s in top form for his first comeback appearance at The Beverly. (Side note: When two reporters in the audience nod approvingly at each other as they scribble in their notebooks, so you know you’ve made it!)

Deacon also gets up on stage and loves his role as emcee during Riff’s Beverly show, and when people talk about him as though he’s the sole owner of the venue, he doesn’t do a lot to correct them — which will be a problem later. But first, let’s talk about Vita.

THE DEAL WITH THE STEAL | Rayna knows an easy way to determine whether the singer-songwriter took $500 from The Beverly’s till: She asks her, point-blank. And Vita looks Big Red straight in the eye and says no. Then she performs a tune she wrote, blowing Rayna and Bucky away with her soulfulness and the way she seems so much older than her years. Later, Vita tells Rayna that she and her sister were in the foster-care system for a really long time, and music was the only thing that saved her. The way Rayna’s eyes are saying, “Same girl, same” is a little ridiculous — yeah, you had a strict jerk for a dad, Ray; but this girl has basically had to fen for herself since she was Daphne’s age — but given what happens later, I’ll allow it.

Vita shows up for her shift at The Beverly, where Deacon greets her warmly and Frank gives her the stinkeye. It eventually gets to the point where Vita and Deke’s sponsor are yelling at each other about the missing $500, and she finally admits that she nipped it but was planning to pay it back. Upon learning the truth, Rayna visits Vita’s studio apartment on wheels for an explanation. Vita tells her she needed the cash to pay off some guys whom her sister owed or something, but it’s too late: Rayna sadly informs her that the Highway 65 contract isn’t going to happen. And later, when Rayna swings by the parking lot again, Vita is gone, her guitar is smashed into molecules on the pavement, and her car is torched.

Oh, and Frank lemonpusses his way all over The Beverly during Riff’s show — and especially when it seems like everyone thinks Deacon is God’s gift to bar-and-grill ownership — until his emotions get the better of him and he runs to the storeroom and has a drink.

TEENAGE DREAM | Elsewhere, Frank’s daughter Cash — who until recently seemed like a good-if-momentarily delusional (remember that comment about maturity?) influence on Maddie — suddenly seems way more into her friendship with a teenage girl than a well-adjusted young woman should be. One night at The Bluebird, she performs a song she wrote with Rayna’s older daughter, and though it’s really good and very catchy, it’s just racy enough to make Cole clutch his teenage pearls. (Side note: Though that phrase sounds vaguely dirty, it’s not.) He confronts Maddie about it, which turns into them arguing over whether or not music is a worthwhile endeavor, and they break up. Maddie laments this turn of events in teary conversations with Cash, leaving Daphne to feel very left out of her sister’s life.

A note on this storyline: As someone who was once an annoying teenage girl, I fully understand how someone like Maddie would become infatuated with someone like Cash. She’s cool. She’s slightly older but not old. She’s pretty. She has a career that Maddie wants to pursue, and — most importantly — she makes Maddie feel like what she says and thinks matters. To cranky adolescent ladies, there is no greater currency. So that part of the storyline rings really true to me (holler if you hear me, fellow 30-somethings), but because this is Nashville, I keep thinking that something horrible/outlandish is going to happen. Like Cash is going to pull an Emily Valentine and torch the homecoming float or something. SEE WHAT YOU’VE DONE TO ME, CALLIE KHOURI?

AVERY ON THE MEND | Avery goes on a date with a single mom he meets at the playground. It makes him happier for a short while, but his inability to talk about anything other than Juliette makes her pump the brakes (kindly) on their hookup. Layla takes the news of Avery’s back-on-the-marketness badly, bitching at the staff during a photo shoot. Glenn sits her down, and I love the weariness in his voice as he uses all of the lessons learned while handling Juliette to calm this wannabe diva. “Let’s find out what you’re actually worried about, and we can nip this thing in the bud,” he tells her… and I also love the surprise on his face when she actually does what he says.

Being compared to Juliette — her sworn enemy — brings Ms. Grant up short, and she’s immediately contrite as she confesses that she’s kind of got feelings for Avery. Glenn advises her to recognize those feelings as griefy reboundish emotions and to ignore them. And while Glenn is awesome, I can’t help but feel as though Ju would’ve made far more low-level assistants cry before receiving his message. Layla, you can’t even bitch right.

MUSIC CITY GOINGS-ON | Gunnar and Scarlett decide to put both of their names on all of their songs, regardless of which of them actually wrote the song… Colt may enlist in the Army… Will is courted by a gay record label that wants him mainly because he’s hot and likes kissing boys. “Who I am is not a gay country singer,” he informs the label head. “I’m a country singer who happens to be gay.” Could’ve fooled me…