Fans of The Family, there’s something you should know: Series creator Jenna Bans has been holding out on you.

Long before the ABC drama came to fruition, when it was just a story pitched in a boardroom, Bans knew the major twist she’d eventually reveal to viewers: that the returned Adam Warren is, in fact, an impostor, a revelation that was made in the final moments of Sunday’s episode.

But if you’re feeling skeptical about Adam’s paternity-test results — and we wouldn’t blame you, considering they came from a coffee mug and a used Q-Tip scooped from the trash — Bans can assure you they’re totally accurate.

“It’s definitely not a bait-and-switch where we’re going to take it back,” Bans tells us of Adam’s identity. “This is the definitive answer, and the mystery will spiral out from there. If anything, the show gets to be a faster ride after the reveal in this episode.”

For help unpacking Sunday’s eventful episode, we chatted with Bans about what Adam’s impostor status means for the series, the Hank Asher-related secrets that have yet to come to light and the potential relationship that could bloom from Bridey and Willa’s bar kiss.

TVLINE | When you were breaking these first few episodes, how much did you wrestle with whether or not to make Adam an impostor?
We always knew he wasn’t Adam. When the writers first joined me in June and we started the room, that was the first thing I told them. The backstory really never changed from what I pitched to the network, so we knew where it was going. The bigger question — and the one we wrestled with more — was when to reveal it. A lot of writers, myself included, go into it with 12 episodes, and the most comfortable thing to do for a TV writer is go, “OK, we’ll hold it until Episode 11 or 12.”

We did wrestle with whether to do it in Episode 6 or 7, and then one day in the room, we were like, “We’re just gonna say it’s not him, just bluntly at the end of Episode 5.” We almost wanted to play the episode as if you weren’t going to get the answer. Bridey and her editor, Gus, are talking about the fact that she did this paternity test, this really low-rent thing where she stole the dad’s coffee cup and got Adam’s Q-Tip from his room. The grossest version of a paternity test. [Laughs] And then, the way they’re talking about it, you don’t know that the result is going to suddenly come at the end of the episode. We very specifically put that scene with her and Willa toward the end, so you would feel that that’s maybe the last moment in their storyline. And then we go to the moment of [Nina saying], “We’re going to have to use Adam as bait,” and we wanted that to feel like the end. The coda of Bridey walking into Gus’ office and being like, “Oh, by the way, it’s not him” would just be a total curveball for the audience. As we talked more and more about the mystery of the season, it became clear to us that there was more interesting things to do once you knew it wasn’t him. That’s basically the back half of the season, and I actually find it more exciting than the beginning. 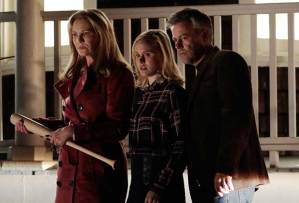 TVLINE | Can you speak to how this twist will turn some current storylines on their heads?
We’ll see in Episode 7, which is one of my favorite episodes, that you almost see the pilot backwards. You see the pilot again, now knowing it’s not [Adam], and how it all happened, which is really cool. And then the show really becomes about some of the characters who know it’s not him, and they wrestle with that at home. It still has that element of strong family drama. And a new question is raised about Adam and his true identity that makes you very, very interested to hear the answer. It makes the Warren family very, very invested in knowing the truth about him, and that’s the story engine in the back half of the season. But also, Nina will be continuing to go after the pock-marked man, and we’ll also start to wonder just how Hank was involved in the kidnapping of Adam Warren. There’s a lot of juicy mystery threads that come up organically, once we know it’s not him.

TVLINE | I’m very curious to see how Danny will react to the news about Adam, given that he was the only skeptical one from the beginning.
We always loved talking about that in the writers’ room. We were like, “What the hell is Danny going to do when he finds out?” Because you’re right, he called it. He had a funny feeling from the very beginning, no one believed him. He’s not the most respected observer. He does find out, and that’s a pretty amazing scene. It doesn’t happen for a little while, because as we saw in Episode 4, he starts to wonder if he’s maybe he’s just insane and unreliable and a loser. And now that the audience knows it’s not Adam, it’s very interesting to see him with Danny, who’s actually starting to believe it is Adam. He doesn’t find out for a little bit, but when he does, I would say the word to use is “explosive.”

TVLINE | Shifting gears, we also got a lot of insight into Hank’s psychological damage this week, given the lengths he went to to make John look guilty of assaulting him. Will you guys be exploring that a bit more, in terms of how Hank got so tormented?
We definitely are. For me, it’s that he just has an obsession with these people. He sat in jail for 10 years for a crime he didn’t commit and singularly thought of this family for every day of those 10 years. He does blame them for it, and he did commit to the crime but felt he was coerced — so he has a lot of rage issues. [Laughs] And unresolved feelings for this family, which is what drove him to take the bat to his own house and to his own face, really. He has such anger.

What’s so interesting is seeing the audience’s response to him. As a character, he’s an interesting one to have sympathy for. He is a sex offender, and he’s someone that society doesn’t normally look at with pity. But in this case, a lot of our audience is responding with sympathy. We’re really enjoying exploring that and the idea of what makes you a bad person. Is it acting on these horrible urges he has? Or is it just the fact that he has them? Does that make him a bad person? That’s the story we’re telling with Hank, and he has a lot of self-hatred, too, for being what he is and who he is. He’ll wrestle with that for the rest of the season. We haven’t yet come to the end of his involvement with the family and, most importantly, his involvement in Adam’s kidnapping. He is more involved than we know right now.

TVLINE | Can you shed a little light on the Bridey/Willa kiss? Are we to infer that there’s a history between those two women, beyond Bridey’s relationship with Danny?
Bridey has known this family since high school. She was Danny’s high school girlfriend, for lack of a better word. [Willa and Bridey] have known each other forever, and they have that run-in in Episode 4 where Bridey’s like, “You don’t like me very much,” and Willa basically says, “I remember you from high school, and you were kind of weird.” [Laughs] That’s the extent of their relationship. Bridey trains an eye on Willa and has a little bit of gaydar, in that she can tell there’s something about Willa that might possibly be open to being with a woman. And she’s right. Plus, emotionally, you see how shut down Willa is, and that stems from the loss of her brother so many years ago, and the fact that she feels such guilt over it and has since doubled down to make her mother’s life as amazing as she can, politically.

Bridey can see that in Willa, and that’s what that moment is about at the bar. I love that she uses the simplicity of the way Willa’s holding her purse and calls her out on her behavior and her outlook on life. And she’s not wrong. Willa’s response to that kiss — it undoes her in the moment. And if Bridey didn’t completely know, she knows, with that response, that Willa’s gay, and that there’s a vibe between them. That’s definitely something we’ll be playing out, too, over the next few episodes. We’ll really explore it from Willa’s point of view, because for her, this is the first relationship that she’s had with a woman — at least the first substantial one. And we get to see what it does to her emotionally, in terms of her trust issues. Bridey’s good for her in ways like that, but it’s not going to be the most stable of relationships, because this is not the show for that. [Laughs] 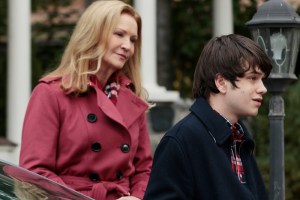 TVLINE | Speaking of relationships, John and Claire had a nice moment in the shower together this week.
They did!

TVLINE | Are they going down a path of reconciliation?
You know, we started out the season where things were so bad between them before Adam’s return. There’s so much crap between John and Claire, and so much that’s out of their hands. When a family goes through a trauma like this — there was a statistic that we talked about in the writers’ room, which I don’t have off the top of my head, but a large percentage of marriages crumble after losing a child, and you can absolutely see why. We really wanted to explore that with Claire and John where it felt like all the bridges had been burned between them. And then all of a sudden, Claire, shockingly, is the one who absolutely believes John didn’t [assault Hank] and absolutely chooses her husband and their relationship, almost over her career. Willa says, “It might cost you the race,” and Claire’s like, “Well, then it’s the race.”

For me, that moment in the shower is less about a blossoming romance and more about the respect between two people who have been married a really long time. It’s really about John saying thank you. I love how Joan Allen played Claire in the shower, because for all of the walls that Claire puts up, you can see that she’s completely vulnerable, too. When John touches her, I don’t think that woman has been touched by her husband in a very long time. That scene just makes me want to hug her. No matter what you think of Claire and her motives, it’s so heartbreaking to almost melt at a husband’s touch, knowing she hasn’t had that in so long. There’s a warming between them that we’re going to be playing out.

Did you predict Sunday’s big reveal? How about the identity of Hank’s attacker? Drop a comment below with all of your thoughts on Episode 5.