This weeks Quantico finds yet another of the ladies Ryan has loved and/or bedded in recent history having a major change of heart and aligning with Alex Parrish’s one-woman counterterrorism unit. Having Hannah come into the fold is bittersweet — does this mean no more of her awesome, scathing monologues — but gives Alex the high level eyes and ears she needs inside the bureau. Because the terrorist is on-task in the extreme.

Speaking of terrorism, a group of bad guys attack Quantico in the past storyline, but you’d barely know it from the way most of the gang bounces back (and quickly!).

Read on for the highlights of “Turn.”

SHELBY LEARNS THE TRUTH | Despite Drew being kicked out of Quantico and Liam being told he was in trouble last episode, both men are still there, glowering at each other, in the past timeline. “If you want me gone, you’re going to have to fire me,” the latter tells Miranda. Um, dude? She basically did last week.

Meanwhile, Will lets Iris in on Caleb’s Mark Raymond secret. And because Iris feels that a distracted Shelby is a threat to their shared classwork — and therefore Iris’ success at the academy — she sneaks into Caleb’s room and steals the envelope Samar/Haifa gave him at the diner. Iris wastes no time, giving Shelby the envelope right away; what the blonde sees inside sends her running out of the lecture room near tears.

The class Shelby is skipping? A talk/lesson from Claire Haas, Caleb’s mom/former agent/budding politician, who’s there to revisit one of her big cases. And while I’m sure she’s distributing important pearls of wisdom gleaned from her many years on the job, all you really need to know is that she’s present when a gang of terrorists arrives at the Quantico campus, looking for blood.

MAYHEM UNLEASHED | A van pulls up to Quantico’s gates; when the guards ask to look in the back of the vehicle, they’re met with a group of armed terrorists who kill them in a brief but bloody skirmish. (Side note: I’m generally not terribly squeamish about fake violence, but coming on the heels of the Brussels attacks, this scene really made me uneasy.) A few minutes later, Raina — who has fetched Charlie on his mom’s orders — arrives at the gates and realizes something is terribly wrong.

Inside Quantico, everyone shelters in place, shocked. Liam and Drew yell at each other a lot before both take off to look for the shooters; in her office, a gutted Miranda assumes that Charlie was involved in the attack. Thing is? She’s right. In the car, as Raina speeds away to safety, the juvenile delinquent admits that “I could have stopped this.” His kidnapping was staged, he gave the terrorists information about the Quantico campus, and when he realized something was going to happen he escaped.

Will and Caleb run off after Shelby, who’s out in the woods. Caleb finds her crying, holding the envelope to her chest: “I’m not OK, Caleb. My parents are alive,” she sobs — and he replies that he knew. “I just didn’t want to destroy you again,” he says as he holds her. Both Liam and one of the terrorists are closing in on them, and when the terrorist has Liam in his sights, Drew comes out of nowhere and takes the shooter out with a bullet to the head.

BREAKING UP IS HARD TO DO | And just like that, everything is just about back to normal? Drew, who’d quit Quantico earlier in the day, is reinstated as a NAT. “Going out there after me, you showed more instinct in an instant than most agents show in a lifetime,” Liam tells the former NFLer, and a grudging mutual respect is born.

After some light flirting with Drew — guys, didn’t people die here today? — Alex goes to the bar to meet Ryan… to tell him that “I want to do this job and I want to do it well, and I can’t do it with you in my head.” Booth is understandably gobsmacked. “How many more different ways do I need to say that I’m in love with you?” he asks, incredulous. She sadly counters that she’s not going to lose everything she ever wanted “because of some guy.” OUCH.

In the same bar, Caleb and Shelby meet with Samar/Haifa, who still wants to be besties with the woman she lied to and bilked out of millions. “You and I? We’re nothing,” Shelby coldly replies. “You are as dead to me as my parents were.” Later, Caleb thanks Will for having his back during the shooting, then (presumably) entertains his roommate’s questions about Mark Raymond. 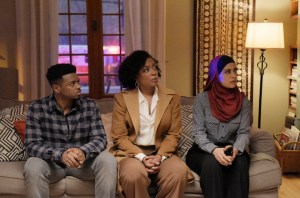 SORRY, CHARLIE | Meanwhile, Miranda meets Raina and Charlie at her house… and one of the terrorists shows up soon after… followed later by the FBI when Raina smartly calls her sister and leaves the line open. Raina and the terrorist have an Islam-off — she calls him a thug, he says he’s a true believer — then there’s a very tense standoff in which Charlie ends up shooting the terrorist but Miranda and the FBI end up shooting Charlie. He’s not dead, but Miranda still feels terrible.

WHAT A PILL | In the present storyline, the terrorist sends Alex a pill bottle and gives her a mission: Plant the bottle, which is a replica of one of Claire Haas’ and contains a tracker in the lid, in the senator’s handbag while she’s visiting the FBI. The only problem is that Hannah is very suspicious of the junior agent, and she won’t let Parrish anywhere near candidate Haas. Eventually, Hannah out-and-out fires her.

Alex tries luring Claire to her by saying she knows the location of Caleb, who’s apparently been missing for months. But Sen. Haas knows she’s bluffing, because Claire actually does know where her son is — but no one else does. Five hours pass, and Alex still hasn’t placed the fake pill bottle; in a last-ditch hail mary, she gives the bottle to Hannah, who looks at her like she’s crazy. But when the terrorist calls, he/she/it/they congratulate Alex for a mission well done. This stymies Simon and Alex, until Agent Wyland shows up at Alex’s door: Natalie’s email requesting emergency time off was bounced from a remote server, which is a huge red flag. So she placed the pills, and she wants to know what the hell is going on. And when Alex interrupts another one of those monologues — “Shut up and stop talking!” (heh) — Hannah officially joins the team.