Oh say can you see… that we’re nearly at the end of Sleepy Hollow‘s third season? And that it looks like the Witnesses are headed back to the catacombs? And that yet another person in their lives is privy to the secrets of the impending apocalypse?

This week’s National Anthem-centric episode drafts FBI boss Daniel Reynolds onto Team WTF, a development that both scares and emboldens Abbie to make like Oprah and live her best life. (“YOU get a mystical jug! And YOU get a mystical jug!”) Meanwhile, Jenny’s not ready to make nice with her dad, and Ichabod’s connection to Betsy Ross has never been more important (yeah, her craftsmanship of the first American flag finally comes into play). Oh, and there’s a Hamilton reference! Read on for the highlights of “Dawn’s Early Light.”

IN WHICH ICHABOD DISCOVERS KFC | That “talk” The Hidden One said last week that he and Pandora had to have? It consists of him nearly drowning his wife in their evil Jacuzzi and comparing her to a house pet he’s indulged for too long. Charming. She apologizes, but he doesn’t want to hear it, because he’s tired. “I may continue punishment later,” he says.

Over at Casa Witness, Jenny marvels at how the catacombs have helped Abbie kick her coffee habit. Does being stuck in a monotonous nether dimension for nearly a year also work on a crippling addiction to Cadbury’s Mini-Eggs? Asking for a friend. When there’s a knock on the door, it’s the ladies’ dad, Ezra, stopping by to say hello while on a work trip. Abbie greets him rather warmly; Jenny’s glare, as the trio peruses an old photo album from the girls’ youth, could freeze lava. (Side note: How cute is Baby Abbie?)

Ichabod bursts in through the back door, loudly praising fast-food fried chicken, but gets less silly when Abbie introduces him to her father. “Take good care of my daughter,” Ezra tells Crane on his way out, which is a weird thing to say to a stranger who’s not been identified as Abbie’s man, unless maybe Crane’s casual entrance led him to assume they’re together?

BOXED IN | Later, Ichabod discovers Pandora poking around the Masonic cell and pulls a gun on her. She stops him from killing her by explaining that she needs help putting her box back together in order to thwart The Hidden One’s destruction of humanity. “It is the only thing that will stop him,” she says.

But of course, there’s a catch: The box “can’t be repaired, only regenerated” where it was formed: the catacombs. And because the Witnesses destroyed treevil, aka the only known path to that godsforsaken place, the situation is quite dire. But Crane remembers Betsy Ross’ cutlass that he saw there when he appeared to Abbie, and posits that there may be another way.

ANYTHING TO GET OUT OF GOING TO JERSEY | Abbie isn’t happy to hear that the only way to subvert The Hidden One’s maniacal plan is by returning to the scene of her slow but steady undoing. Ichabod understands, telling her “this must be your decision.” Hey guys? I know I’m not a Witness and all, but couldn’t Ichabod go alone? Or with Jenny and/or Joe?

That discussion gets tabled when Ichabod brings up his earlier thought about Betsy, then remembers the last time he saw her: just before Washington’s troops crossed the Delaware in 1776. The general ordered Ichabod to stay back, something that rankled Crane in the extreme. He recalls staring off into the fog as the boats pushed away from the shore, and that’s when the Witnesses make one whopper of a logical leap, even for this show.

“What if the crossing of the Delaware was actually —” Abbie starts. “— a journey to the catacombs?” Ichabod finishes. Um, OK?

NOT THROWING AWAY MY SHOT | Closer inspection of the painting of the event hanging in the Archives makes Ichabod think that Betsy was aboard one of the boats that night, even though in a flashback, she’s nearly crying as she tells him she’s not part of the mission. She’s also stitching one of the first American flags as they chat in camp; he remarks on the golden thread she’s using to outline the stars. 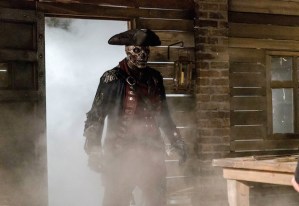 Team WTF comes up with the idea that the golden thread is the key to accessing the path to the catacombs, so all they need to do is to recover the original flag from where it’s on display at Paul Revere’s home in Boston, and they’re good. One problem: When Mills and Crane get to the historical site — and have a discussion in which Ichabod is peeved to hear that there’s a musical celebrating Alexander Hamilton (“The man had a voice like a stuck goat!”) — they realize that the flag hanging on the wall is a copy of the one they’re looking for. And when they touch it, they accidentally summon a Sisterhood of the Radiant Heart-created watchdog demon named the Eternal Soldier who hurls fire and chases them out of town. Meanwhile, as Ichabod notes, “we’re running out of time” to stop The Hidden One. So… no J.P. Licks stop, then?

REYNOLDS KNOWS | Based on photos of the flag that Abbie sends, Jenny and Joe realize that what look like burn holes in the cloth are actually the first few notes of Francis Scott Key’s “Star-Spangled Banner.” Bing bang boom, the Witnesses are headed to Ft. McHenry in Baltimore! But before they can get in the car, Daniel confronts Abbie: He got a call that she trashed the Revere home (thanks, Eternal Soldier), and he is mad.

Just then, the Eternal Soldier materializes and begins throwing fireballs at the trio. Daniel unloads all the bullets in his gun into the creature, but only Ichabod backing over the beast with the car saves their lives. As they make their getaway, Abbie gives her boss/ex the bare bones details of her life fighting the apocalypse, but he’s having understandable trouble processing it all. “In his hands he created fire!” Reynolds sputters, and A+ to Lance Gross for his very funny reading of that line.

EASE ON DOWN THE ROAD | Let us now pay attention to two sentiments I feel are likely key for the rest of the season. First, when Pandora astral projects into The Hidden One’s lair to taunt him, she notes Abbie and Ichabod’s close relationship. “If there is one thing I learned from those Witnesses, it is that the power of a true bond can conquer any might,” she muses. Second, Ichabod bittersweetly remembers the letter Betsy left for him after her departure, telling Abbie, “If you care for someone, you do not leave anything unsaid.” These are big, emotional sentiments, Sleepy Hollow, and I really hope they’re leading to something in the next two episodes on par with when Ich said goodbye to Abbie in Purgatory.

Back to the action! Abbie and Ichabod locate the real flag underneath Fort McHenry, and with an assist from a liquid nitrogen-toting Jenny and a sledgehammer-wielding Joe, they defeat the Eternal Soldier. Yay! Happy fun times! Back at the FBI, Abbie and Daniel kiss in his GLASS-WALLED OFFICE HOLD UP ISN’T THIS TOTALLY AGAINST BUREAU REGULATIONS? Also, don’t they still have to stop The Hidden One from ending the world? Wait, how was he going to do that again? And aren’t the 48 hours up yet?!

Eh, if Abbie and Ichabod don’t seem terribly worried about it, I won’t sweat it, either. They meet at a park at dawn, where Ichabod reveals that the gold thread needs to be hit by “the dawn’s early light” in order to work properly. And when the sun rises and glints off the flag, a 3D map of the path to the catacombs springs up to mark their way. “Are you ready to go back, leftenant?” he asks. “Let’s go,” Abbie replies.

Now it’s your turn. What did you think of the episode? Did you like the sweet moment Jenny had at the end? Anyone think Pandora might be playing the Witnesses like Abbie feared? Sound off in the comments!