Careful there, Renard. Fatherhood — even sham, for-the-cameras, get-me-elected fatherhood — may be more trouble than it’s worth.

In Friday’s Grimm, Sasha Roiz’s Capt. Renard met with his former hook-up Adalind to offer her some information about their missing daughter. While the meeting seemed like a friendly gesture at first, Adalind soon realized that there was more to Sean’s overture than fatherly concern for Diana.

What we know but Adalind doesn’t (yet): Campaign manager and Black Claw operative Rachel is pushing Sean to polish his family-man image, all the better to secure votes in the Portland mayoral race and win another position of power for the pro-Wesen/anti-everyone else organization.

“Adalind didn’t think she was just going to get Diana back for nothing, but what’s demanded of her [later this season] is incredibly challenging,” the actress previews. “What she has to do in order to get Diana back is the most difficult decision that she could possibly be forced to make.”

Anyone else very worried about little Kelly now? 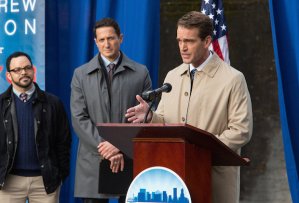 Sasha Roiz says that his character views Diana as “so much more than their daughter. She is definitely a very strategic pawn in this whole mythology. She’s proven to be someone who’s gifted and has a significant amount of power.”

He adds: “There’s a lot of people vying for this girl.”

When she reappears on the show, the girl in question will look a lot different from the young blonde child last seen riding in a helicopter with Meisner: A pre-teen Oregonian actress named Hannah R. Loyd now will play Adalind and Renard’s child.

“The character of Diana now, she has this infant sensibility because she’s young, but looks older and is capable and magic and has incredible powers that everybody is just learning about,” Coffee says, adding that Loyd strikes the perfect balance of “charming and totally creepy.” She laughs. “She’s incredible looking, and a really great girl.”

So let’s just say Renard gets it all: the insta-family, the public support, the mayor’s office. Will that be enough for the zauberbiest to feel satisfied (and maybe to let Adalind head back to Nick, if he’ll have her)?

“Renard has always enjoyed having status and having a title,” Roiz says, pointing to his character’s affiliation with the royals a few years back as proof that the captain’s ambitions will likely never be satisfied. “He’s just very easily lured by position, power and leverage.”

Got thoughts on the episode/what lies ahead? Tell us about it in the comments.