The following contains spoilers from this Wednesday’s Criminal Minds.

Before Shemar Moore can even dive into the most pressing issue at hand, he launches into a lovefest directed at his Criminal Minds castmates.

Surveying his 11-year run on the CBS crime drama, “I’m proud of Joe Mantegna, Thomas Gibson, Matthew [Gray Gubler], Kirsten [Vangsness]… because not only did we bust our ass and defy the odds and create a hit show together, everything we did was together,” Moore says, giving props to said co-stars’ behind-the-camera contributions, as directors and writers. 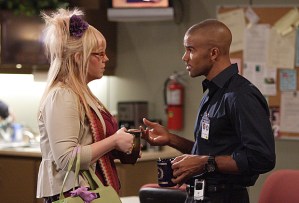 “Matthew started directing, and that inspired Joe. And that inspired Thomas. And then Kirsten got inspired [to write], and I supported her. And AJ [Cook] is a mother of two and took time out for her life and came back,” he continues. “It was nice to see everybody growing.”

And now, Moore wants… more. Ergo his decision to bid adieu to Derek Morgan, who in the March 23 episode decided to leave the BAU and focus on being a family man, with wife Savannah (who, like Derek, had barely dodged an UnSub’s bullet) and their newborn son — Hank Spencer Morgan.

RELATED 2016 Renewal Scorecard: What’s Coming Back? What’s Getting Cancelled? What’s on the Bubble?

“I didn’t direct, I didn’t write, but I grew, and I’m leaving because I want to continue to grow as an actor,” Moore shares. “I’m leaving to see what else I’m capable of.”

Beyond the professional, and akin to Derek’s own decision, “I need balance in my life,” Moore adds. “I love what I do for a living, I love it from ‘action’ to ‘cut’, but I also want to walk my dogs, travel, get married, have kids. I want balance, and it’s hard to do with the schedule that we have.”

IN THE BEGINNING | Looking back on Derek Morgan’s evolution up to and including his final hour, “To use a sports analogy, I left it all on the field,” 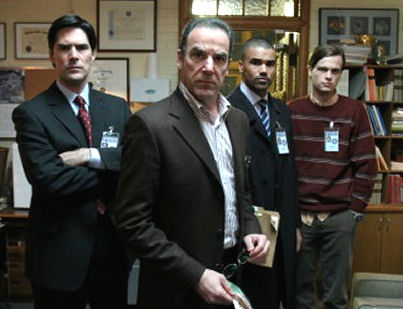 Moore says. “There is nothing, especially after this Wednesday night, I can do to top it.” All of which is the highest of praise, considering how bearish he was on the show’s initial prospects, in a TV climate that at the time hosted “103 cop shows” (as he puts it). “You had Mandy Patinkin — ‘My name is Inigo Montoya and you killed my father, prepare to die.’ Like, OK. I get it. That’s really cool, but I was like, ‘This show’s not going to go anywhere.’ And then all of a sudden it got picked up.”

At that point, Moore nudged for changes, including getting Derek out of the same suit that Hotch and Reid would wear and fashion him more as “the tough guy.” When Patinkin abruptly exited the show in 2007 (“He wanted to do it a different way, but what he did is he got our show off the ground,” Moore notes), that — coupled with Mantegna’s arrival — allowed Criminal Minds to “find our own identity, and all of a sudden it became a true team,” Moore says. “You got to know your heroes, everybody had a position to play.”

RELATED Criminal Minds, NCIS and 22 Others Get Finale Dates at CBS

Moore says that while he was OK with his position as “the guy with the six-pack and the muscles who kicks down the doors,” the fact is he had already doffed his shirt plenty as The Young and the Restless’ Malcolm Winters. So when a Season 2 episode planted the seed for Derek’s childhood molestation secret, which would be revisited six years later, he relished — and hails the importance of — the dark development. 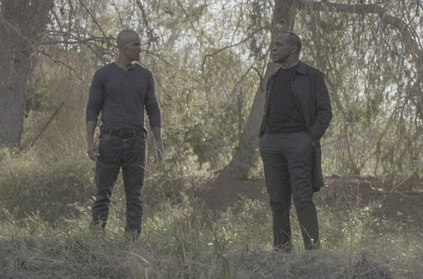 “As an African-American man, am I willing to go out there to the world and admit that I [as a character] have been molested?” he remembers thinking. “Even though it’s pretend, it’s not pretend for many people in the world, but I wanted Derek to have layers. Let him be charming, let him be serious, let him be the big brother, let him be the alpha male, but let him have some vulnerabilities, let him have some demons, let him be a real man. And in 11 years, I’m so proud of the layers that we peeled back. [Including] Episode 16 with Danny Glover, and now this final episode… you’re going to see a side of Derek Morgan that, I would be willing to bet, you had no idea was in him.”

OUT WITH AN ‘EXCLAMATION POINT’ | As for his exit storyline, Moore contemplated ending his Criminal Minds run a year ago, when his contract was expiring, but “artistically, it didn’t feel right to just abruptly be gone” at the end of Season 1o. “So Erica [Messer] said to me, ‘Allow us to give you, and more importantly Derek Morgan, but more importantly the crew, the cast and the fans, a proper goodbye.'” And though he “just assumed” Derek would ultimately be killed off, Moore says Messer was quick to assure, “I’m not killing you. I’m going to make it look like we’re killing you, and I don’t know the story yet, but I am not killing you. I am going to send you off into the sunset on a hero ride.”

Moore was skeptical that anything could top his antepenultimate episode, in which Danny Glover guested as Derek’s dead father, but what Messer and Vangsness co-wrote “put an exclamation point on it!” he effuses. “What I tell Erica is, ‘You gave me that hug,’ and I hope the fans feel like I’m giving them a hug back.” 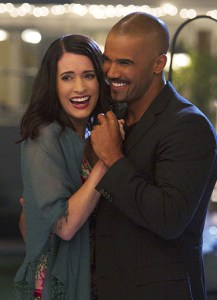 and it’s my thank you back to them. It’s definitely a hug to my Criminal Minds family.”

And should that family ever need him back for, say, a Paget Brewster-style encore, Moore’s answer would be an emphatic yes. Just as he somewhat surprisingly returned to daytime-TV’s Y&R in September 2014, “If Erica calls me and says, ‘We need Derek to do such and such,’ as long as it’s not long-term and I’m not locked into something, but I can just go dance with my friends and family, yes, yes, yes, yes.”

Looking to what his new future might be, Moore admits he doesn’t know if he will next land on a 13-episode cable series, “or I’m a Kiefer Sutherland, or I get The Pursuit of Happiness like Will Smith, or I get the Bourne [franchise] like Matt Damon…. But I’m ready to take the next step.”

Scroll down to watch Moore’s farewell message to fans. And if you want more scoop on Criminal Minds, or for any other show, email insideline@tvline.com and your question may be answered via Matt’s Inside Line.