That terrible, gut-wrenching sound you just heard? The one that sounded like your favorite music box crashing to the ground, fluffy puppies being denied kibble, and unicorn tears splashing in a rainbow puddle? That was the heart of Nashville‘s Avery as it finally, firmly tore itself asunder.

Yep, this week’s episode finds the Barkley-Barnes union officially undone after Cadence’s daddy reaches his breaking point. And guess who’s right there to help him realize that enough’s enough? A vengeance-filled former reality star with dramatic bangs and a yen to napalm Juliette’s world.

Read on as we review what happens in “How Does It Feel to Be Free.”

FREE TO BE IN MISERY | Avery tries to see Juliette at the treatment facility twice this episode. The first time, her probably-well-meaning-but-still-SUPER-annoying therapist says that Ju “doesn’t feel now is a safe time to be engaging with you”

due to her emotional fragility, and when Avery gets angry at that — as pretty much anyone in his situation would, I think — the physician ushers him out, saying, “The last thing Juliette needs now is this kind of drama.” Again, probably true… but as someone trained in helping people manage their emotional states, maybe a little empathy is in order, doc?

Anyway, Avery spends a lot of time at the studio, helping Layla with her second album. But when Luke comes looking for Avery because he’s had trouble getting in touch with Juliette, the overwrought producer decides he can’t lie anymore: He confides in Layla that Juliette is in treatment for postpartum depression, prompting her to lay a calculated hand on his forearm and gently prod him toward ripping of the Band-Aid by reminding him that he deserves to feel free, too.

Next thing we know, Avery is back at the hospital, demanding that Juliette’s doctor give her a message: “We’re over. We’ve been over,” he says, issuing an ultimatum that if she doesn’t go public with their divorce in the next 24 hours, he will. She complies, he cries and takes off his wedding band, and then he seems noticeably lighter the next time he and Layla hit the studio. Side note: Cadence isn’t in this episode at all. I hope she and Emily are off somewhere, having a nice spa day.

RISKY BUSINESS | A woman named Vita walks into The Beverly and asks Deacon for a spot on the already-full open-mic list. He grudgingly allows her to audition for one, then he’s so blown away by her talent that he has Rayna and Bucky come down to the bar that night to hear her play. Vita is pretty amazing, but when Rayna all but offers her a record deal right there and then, she acts really oddly.

Turns out, Vita has hit hard times and needs a job pronto. But when the felony question on the bar’s application sends her running, Rayna tracks her down and realizes the younger woman has been living in her car since arriving in Nashville. “I’ve done some things I’m not real proud of. But I’m not that girl anymore,” she says, copping to being arrested in her past. But Ray encourages her to go back and give the waitressing gig another shot; though Frank takes some convincing, she eventually gets the gig.

All is well until the end of Vita’s first shift, when $500 is missing from the till — and Frank is pretty sure it went straight into her pocket. I understand his suspicion, because Vita is a bit shifty, but would someone who has a potential record deal just waiting for her take the risk of lifting cash from a bar belonging to that label head’s husband?

ERIN EXITS | Scarlett sees Erin kissing a dude in a truck, and when Scar acts all squirrelly around Gunnar, he demands she tell him what’s up. So he confronts his lady, who counters with the fact that they weren’t monogamous… but she’s willing to be, because she likes him so much. Thing is, though? Gunnar doesn’t really care that Erin was swapping spit with Random Guy #1, because he’s not really into their relationship. That stings a bit, but she puts on her big girl ugly hat and bids him a fond farewell. Oh, and Scarlett? She has a date with “taxidermy guy from the wedding. Don’t say nothing about it,” she warns Gunnar. I’m just happy that she’s taking my advice.

HATE SLIME | Will happily agrees to sit in on Gunnar and Scarlett’s next live show, but his performance is cut short when a homophobic bag of garbage in the audience yells gay slurs and then throws a beer bottle at Will’s face, making him bleed. The cops come, and the detective in charge says all Will needs to do is give a statement so they can arrest the dude on hate-crime charges. But Will declines, choosing instead to return to the same bar soon after to finish his set. The violent gay-hater is there again, yelling terrible things, but the crowd is definitely behind Will this time. And when Scarlett and Gunnar get up in the guy’s face, he and his awful friends leave. I have my doubts about whether someone who thinks it’s acceptable to brazenly yell “Homo!” in front of a crowded room would be that intimidated by a blonde garden pixie and her lanky sidekick, but that’s neither here nor there. 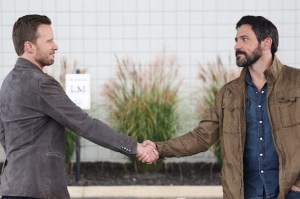 AND WHEN HE’S HOLLERED UNCLE, WE’LL TEAR UP THE TOWN | Luke’s feelings get hurt when his fans start to turn on him over not being a “real” country guy anymore, thanks to the money and the branding and the tax snafu and blah blah. And Luke’s still smarting over Colt’s refusal to return his calls or texts. So when he runs into old pal Riff, who used to be a huge star but retired a while ago so he could put his family first, Luke thinks he’s come up with the perfect solution to his tour woes: Riff will tour with him and help him get back to his roots! Riff is down with that idea, with one caveat: That he can bring his wife and teenage son and daughter with him. And just like that, they have a wheelin’ dealin’, er, deal. (Side note: What’s the over/under on number of episodes before Luke gets jealous of Riff’s family harmony and starts a fight over something stupid?)