THE PERFORMANCE | Since Paula wasn’t going to live through “The Same Boat,” Witt, who played Carol and Maggie’s captor, didn’t have a moment to waste. She had to make sure right from the start that we felt like we knew Negan’s henchwoman. So, in her first scene, the actress tempered Paula’s contempt for her hostages with a confidence that was chilling to behold, creating in the process a character that we not only recognized, we feared.

But — and herein lies the beauty of the writing as well as the performance — we’d only just begun to scratch the surface of Paula. In subsequent scenes, Witt appeared to delight in the cruel humor that is the hallmark of the merciless Saviors, as Paula taunted Carol (Melissa McBride, crushing it, as always) and “praised” mom-to-be Maggie for popping out “bite-sized snacks for the dead.”

Only later did the script and Witt — as subtly as brutally — reveal that beneath the villainess’ rock-hard exterior lay scars that were less hidden than denied. She wasn’t vicious for the sake of viciousness, she was a Carol who had lost the ability — no, make that the willingness — to feel. (BTW, best of luck to the future generations of acting students who’ll audition with the carrot/egg/coffee monologue that Witt slayed.)

HONORABLE MENTION | If Freddie Highmore hadn’t already broken your heart with his sympathetic portrayal of Bates Motel’s “psycho,” he had to have shattered it with his stunning work in “Goodnight, Mother.” First, he imbued his disturbed counterpart with a rarely seen confidence, as Norman, unaware that he “became” his mother during his blackouts, began watching the real Norma like a hawk. He had no idea that the “Mother” he saw dispose of a hotel guest was, in fact, him — a point painfully driven home that evening over turkey pot pie. When Norma asked him to snap out of it, Norman snapped, period, allowing his portrayer to take the teenager in a matter of seconds from controlled to so rageful that his mother fled in fear for her life. Later, more quietly but no less powerfully, Highmore revealed Norman’s resolve to end his and Norma’s dysfunction for good. “We just don’t belong in this world anymore,” he said. And, through it all, the actor remained as committed as his character finally was.

HONORABLE MENTION | If your only exposure to T.R. Knight has been as Grey’s Anatomy‘s George O’Malley, Hulu’s 11.22.63 really did a number on you this week. To date, his Johnny Clayton merely came off as uptight do-right with some sexual peccadilloes. But upon learning that estranged wife Sadie’s suitor, (time traveler) Jake, not only was keeping secrets but had been made privy to Johnny’s own, Knight was given a showcase that dared you to watch, as the door-to-door salesman reveled in his savage assault on Sadie and torturing of her new love, whom he ordered to drink bleach. “You did this! You turned my wife into your dirty-bird whore!” he roared at Jake, evoking another of 11.22.63 author Stephen King’s crazies, Annie Wilkes. “There are bad people in this world… and someone has to do something about it!” When Sadie then taunted Johnny with the most tragic bit from his past — “Your grandmother washed you real good” — Knight, with a twitch of his face, made clear that Johnny had been shamed beyond words, before launching into what would be his final rage. 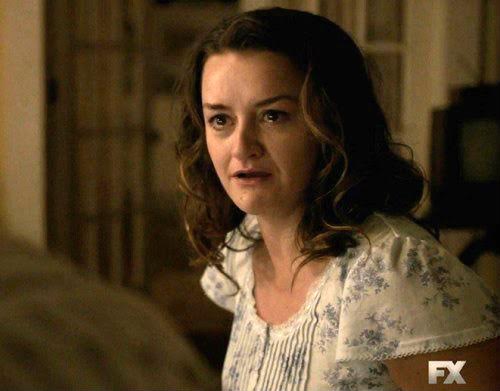 HONORABLE MENTION | Just one anguished look from Philip’s “wife” Martha in this week’s Americans‘ premiere hauntingly illuminated the dark underbelly of the Jennings’ Cold War spy game. As her husband confessed that he set up Gene to take the fall as the FBI’s mole, Alison Wright‘s face registered pure shock as she realized that the man with whom she shares a bed had killed her colleague. Then the horror set in when it became clear  that she was, at least in part, responsible for Gene’s unjust death. “I didn’t agree to this! I didn’t want this!” a distressed Martha cried out. “What have you done? What have I done?” Wright brought so much raw, relatable emotion to the intense confrontation that we almost found ourselves wishing Martha would save herself and walk away from her sham of a marriage. We said almost.