Though we’d all heard that Jeffrey Dean Morgan wouldn’t be making his debut on The Walking Dead until the end of the season, Negan wound up being introduced in this week’s episode.

But, in a way, it was the “sort of” that made the villain seem even scarier than he did before. How so? Read on…

‘YOU SHOULD BE GLAD SHE DOESN’T HAVE A SACK OF GONADS TO TRIP OVER!’ | As “The Same Boat” began, we flashed back to the moment in “Not Tomorrow Yet” when Carol told Maggie to stay put… then winged the Savior who was sneaking up behind her. Before Maggie could finish off the guy, whose name we later learned was Donny, a female Savior, Paula (Alicia Witt, killing it), pointed a gun at Carol’s head. And she had two more Saviors with her: an older woman named Molly — Molls, to Paula (and us) — and a brunette about Maggie’s age. So, yeah, check and mate.

Observing through binoculars as, back at Negan’s HQ, fellow Savior Primo was shot off “his” bike and apprehended by Rick & Co., Paula intervened (as we knew from last week) via walkie-talkie. Though Donny was eager to get Primo back, as he apparently had the skills needed to treat a gunshot wound, Paula wasn’t sold on the deal that Rick offered up. “Two [hostages] for one?” she scoffed. “That’s not much of a trade.”

‘YOU NEED TO TAKE SOME YOGA BREATHS AND CALM YOUR ASS DOWN’ | After Carol and Maggie were moved to and tied up at the Saviors’ safe house (which seemed to take its decorating inspiration from the first Saw movie), Carol snagged a rosary from a felled walker being dragged out of the room and pretended to hyperventilate until Molls removed her gag, “found” the rosary in her pocket and gave it to the “nervous little bird.”

“Are you actually afraid to die?” asked Paula, clearly past the point of being scared of anything. Carol replied that what happened to her didn’t matter so long as Maggie and her baby were OK. (Which seemed like a bad move, didn’t it? Painted a target right across Maggie’s tummy!)

The brunette Savior seemed affected by Maggie’s pregnancy, but neither glacier-cold Paula nor Molls were. Paula laughed that it was “cute,” the idea of making “bite-size snacks for the dead,” and Molls puffed on a cigarette till Carol, backed up by the brunette Savior, had her put it out to spare the kid from secondhand smoke before it was even born. “Y’all are worse than a buncha Evangelical second-graders,” Molls huffed. (I know she was evil and all, but c’mon, Molls was a hoot and a half, right?) 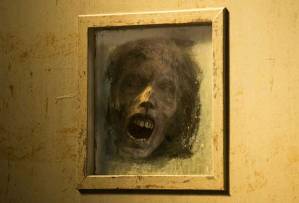 ‘YOU’RE NOT THE GOOD GUYS’ | Later, as Donny’s pain intensified, so did his rage. Why should he be messed up when there was Carol, sitting pretty, totally unharmed? “Shoot her in the arm, too,” he suggested to Paula. When his significant other refused, he smacked her, prompting Maggie and then Carol to intervene (which, as you can imagine, was hard to do with their hands and feet bound). After interrupting Donny’s attack on Carol by coldcocking him, Paula had the brunette Savior take Maggie to another room for questioning. It did not go well. In fact, we found out more about the Savior than the Savior did about Maggie’s camp.

Next door, Paula killed time by engaging Carol in some of the nastiest girl talk in the history of both talking and girls. For instance, when Carol said that her faith had gotten her through the death of her daughter, Paula retorted that the good news of her hostage’s predicament was that “maybe you’ll get to see her again soon.” (And you could just tell that Witt was savoring every minute in Paula’s thick skin.)

‘YOU WILL DIE’ | After Paula turned down Rick’s deal, Carol — whose aptitude for acting has come in increasingly handy — lied to her that they’d killed all the Saviors for fear of retaliation for Daryl taking out the guys who’d tried to rob him, Sasha and Abraham on the road. Those ill-fated Saviors mentioned Negan, Carol added. Who’s Negan? “Sweetie, sweetie,” answered Molls, “we’re all Negan!” (Cult-y much?)

Next, Paula treated Carol to the story of her life as a wife, mom and secretary who, upon the end of the world, had gradually become a remorseless killer. Deducing that Paula was actually “the one who’s afraid to die,” Carol coolly informed her that today would be her last if she didn’t accept Rick’s offer. Was Carol going to kill Paula? the Savior asked. “I hope not,” Carol replied. And man, did she ever mean it.

Unfortunately, no sooner had Paula agreed to trade hostages with Rick than she’d figured out from the lack of static on the radio that his crew was close and probably planning to attack as soon as she and her gang walked out the front door. Since reinforcements were still a ways away, she, Molls and the brunette Savior hastily prepared for an ambush, leaving Carol alone to free herself with the crucifix, then free Maggie as well. Growing ever more reluctant to kill, Carol wanted to leave. Maggie, on the other hand, insisted that they had to finish off the Saviors.

‘JUST RUN’ | Discovering Donny already dead and turning, Maggie used him as a weapon with which she could kill Molls. Paula, upon finding the older woman’s body, realized at last how badly she’d underestimated her hostages and, teary-eyed — hey, she could feel after all! — went after them, guns blazing. Carol tried to let her go, but when a nearby walker that the Saviors were using as a kinda booby trap got free and lunged at Carol, she shot her former captor. Next, the brunette Savior came in and got into it with Maggie, even slashing the mom-to-be’s belly before being shot by Carol. Next — yes, another “next”; Maggie and Carol really got put through it this week! — Paula stood up, injured but alive, and asked what it was that Carol had been so afraid of. Aiming her gun at Paula, Carol answered, “I was afraid of this.” Before she could pull the trigger, though, Paula made her move. Not that it saved her for long. In the ensuing fight, she was impaled on a plank of wood and turned into Walker Chow.

When Paula reinforcements radioed in, Carol — using her best Paula voice — instructed them to head for “the kill floor,” where she and Maggie burned them alive. Finally, Rick & Co. arrived. Upon hearing from Carol that no, she wasn’t all right, Daryl gave her a big hug. (Aww.) “Are you OK?” Glenn asked Maggie. “I can’t anymore,” she replied, dropping the tough-as-nails façade she’d worn the whole dreadful day. Once more, Rick attempted to get intel out of Primo. Where’d he get the bike? Was Negan at the safe house or at HQ during the assault? “Both,” Primo said at last. “I’m Negan, s—head!” In response, Rick immediately shot him in the head as Carol clutched the rosary so tightly that her hand bled.

So, do you think Maggie lost/will lose the baby as a result of her injury? Were you sorry Paula was killed off so quickly? Hit the comments.