It takes a lot of chutzpah to mansplain to a god, but Ichabod Crane has never been one to shy away from a challenge. So when Sleepy Hollow‘s oldest living Revolutionary widower gets trapped in the Archives with The Hidden One, Crane doesn’t let a teachable moment slip away.

The result? One of the season’s better episodes, an hour in which:

* Ichabod is allowed to be funny but not necessarily goofy (and there is a difference)
* We get some serious, interesting movement on The Hidden One and Pandora, as well as a hint of how their involvement in the season might shake out
* Joe’s otherworldly side is purged, seemingly for good
* Abbie buys donuts and kicks ass (and she’s all out of donuts)

Read on for the highlights of “Incommunicado.”

ALL HAIL THE WAIL | A suburban dad jam band rehearses, and it sounds so terrible, it literally summons a demon to make it stop. Well, technically, the ruckus attracts a banshee who sucks up all the sound and then vomits it back at the guys until their eardrums pop and their brains bleed out their ears. Potato, potahto.

At the archives, Abbie arrives with a bag from the local bakery, but even before she can show him what’s inside, Ichabod is peeved she didn’t get him what he wanted. It takes her all of a nanosecond to realize that he’d been spying on her with the tablet/symbol combo, and he quickly swears that that was the only time he’d watched her remotely. (Cue the “Ichabod inadvertently remotely views Abbie in the shower” fan fiction in 3… 2.. 1…) “This is a crime against pastries, nothing more,” he vows, grudgingly accepting a multigrain croissant as she trots off to check out the band attack details with Sophie at the FBI.

No sooner has Abs gone than The Hidden One appears in the Archives, and again I ask: Is there no protection spell or anything of the sort — heck, even a salt circle couldn’t have hurt — the Witnesses might’ve employed to hinder otherworldly creatures sauntering onto their turf? The god slams Ichabod about a bit, then threatens to kill both him and Abbie. But just as The Hidden One hurls a ball of energy at Crane, the symbol he slipped into his pocket leaps out to intercept it, creating a mystical barrier that seals both men in the room… and everyone else out. 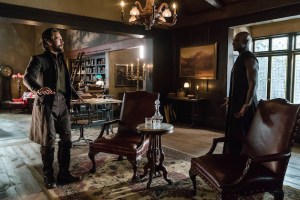 BREAKING THROUGH | Abs comes back to find herself locked out — and Pandora strolling the tunnels like she’s walking a geriatric Corgi. She informs Agent Mills that the emblem of Thura (aka that symbol she’s been worshipping since she returned from the catacombs) was made to contain the power of a god; in fact, it’s the thing that kept The Hidden One away from humanity for such a long time. (Pay attention, because that little fact is going to be important later.)

The good news: Pandora thinks she can use the fragments of her box to get through the spell. The possibly good news: She needs to channel the energy of a living supernatural creature to do so… and there just happens to be a banshee wailing its way all over town.

GETTING AN EARFUL | Jenny, Joe and Sophie arm themselves with the ambulance’s siren (to draw the banshee out) and some really ineffective drug-store earplugs: Is it any wonder they’re not real successful in bringing her/him/it home alive? Though they manage to trap it at one point, the creature nearly scrambles Jenny’s cerebellum with its unholy yodel, and Joe is forced to crossbow it through the chest to save his lady. Who’s gonna tell Abbie? “Not it!” Sophie cries. (Ha!)

So they need another monster… and Joe volunteers to have the evil sucked outta him in order to help the cause. Jenny tearfully objects; after all, as Pandora informs them in the most hilariously blasé way possible, the process might kill him. Or maybe not. Who even knows these days? So Joe kisses his girlfriend, tells her he loves her, strips off his shirt (not mad about it) and steps into the circle to begin the ceremony.

Joe beasts out rather quickly, and it seems like all is lost when he advances on the women as though he’s going to hurt them. But Jenny assures Pandora and Abs that she can get through to Joe, and after she tells him she loves him for the first time, it seems like she’s right: He turns around and heads back to his Pandora-determined spot like a good little monster. (Side note: Has Joe always had that booty when he’s in beast mode? Damn. I hate to see him wendi-go, but I love to watch him leave, if you know what I mean.)

KILLING TIME BEFORE IT’S KILLING TIME | Meanwhile, Ichabod searches his books for a solution while The Hidden One mocks him. “I take it you’re not a reader,” Crane quips. “Omnipotent,” the god replies. So Ichabod puts on some jazz and generally takes on the air of that annoying guy in your freshman dorm who was all, “You’ve never heard Miles Davis?! John Coltrane?! Dizzy Gillespie?! I’m going to go make you a mixtape RIGHT NOW.” He waxes poetic about various works of music, art and literature while The Hidden One looks bored. “What you call ‘pablum’ is in fact inspiration, and it is forged in the enduring soul of humanity. You may know everything, but you understand nothing,” Crane lectures, which is awesome and all, but don’t you have a supernatural construct to disassemble?

The Hidden One makes a big show of absorbing all the information in every book in the room, then announces that none of them will help the pair escape. Oh, and while he’s pontificating, he drops some rather important knowledge on Ichabod: Witnesshood is handed down through family bloodline. As Ich will note later: Mind blown.

Crane makes one last-ditch effort to contact Abbie by assembling the tablet-symbol combo in such a way that it becomes a projector, giving everyone in the room a window into the other Witness’ existence. And that’s how The Hidden One hears Pandora — who has asked Abbie to give her any outstanding pieces of her box in order to focus the spell — confess that she was both the one who got her hubby banished back in the day and the one who knew Abbie had the emblem that was so important to him but said nothing.

But then the walls start shaking and the end seems imminent, so Ich pours himself a drink and settles in for him, The Hidden One and the apocalypse.

ALMOST ALL’S WELL THAT ENDS WELL | Thanks to her slightly more complete box, Pandora is able to get rid of the barrier and save both men. Joe is also fine, though I can’t be sure that his pants survive the transition back to humanity; sadly, the camera doesn’t show us one way or the other. And when Abbie runs to the archives to check on Crane, the Witnesses share a relieved hug AND IT’S A VERY GOOD ONE. He shares the bloodline intel with Abbie, they realize the tablet has been destroyed and they wrap the episode with donuts and a fist bump. And here I thought today would bear no fruit…

At Jenny’s trailer, Joe’s sore but pretty sure that the wendigo is wendigone. And he remembers Jenny telling him she loved him and that he can have a key to her trailer. They are cute as they tussle on the bed. Less cute? The Hidden One and his wife, particularly as he lets on that he knows she lied to him. “We have much to discuss, Pandora,” he says, and anyone who’s ever been in a relationship knows that no good conversation begins with that line.

On a closing note: Props to Shernold Edwards and Heather Regnier, who wrote this week’s episode. The Crane-Mills relationship feels more on point than it has all season, making me very excited to see what the final few episodes will bring.