Only two weeks remain until Supergirl gets a helping hand from The Flash, when the CBS drama’s March 28 episode marks its first crossover with a CW comic-book series.

But if you’ve never watched an episode of the Grant Gustin starrer, or you haven’t spent any time in National City, fret not: Supergirl‘s producers say you won’t need to binge-watch either series before the team-up.

“Obviously, you have to understand the concept of superheroes and that they can have all sorts of different kinds of powers when [The Flash] shows up,” EP Greg Berlanti told TVLine on Sunday prior to Supergirl‘s PaleyFest panel. “People will appreciate how he gets [to National City] and their journey that they take in the hour.” 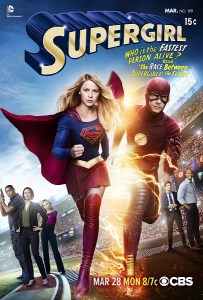 As previously reported, The Flash will arrive on Supergirl’s turf from an alternate universe and, in exchange for a way home, helps her battle not one but two adversaries: Silver Banshee (the alter ego of Cat Grant’s assistant, Siobhan Smythe, played by Chasing Life‘s Italia Ricci) and returning baddie Livewire (True Blood‘s Brit Morgan).

“It is the most joyous occasion to have these two superheroes together in the same place, at the same time, working together,” star Melissa Benoist effuses. “They are both so happy with their powers and what they get to do and how they get to help people, that it’s kind of infectious and exciting and upbeat and happy.”

But not everyone will be so thrilled to see the Scarlet Speedster in town. According to executive producer Ali Adler, although the two heroes enjoy “quite an adorable banter” and “immediately click,” that won’t please the newly single (and still-interested-in-Kara) James Olsen.

“We have this little rivalry, because he’s a superhero, too, and kind of hitting on my girl a little bit,” Mehcad Brooks shares. “I’m like, ‘Damn you, Barry.'”

Given the chemistry between Benoist and Gustin, Adler admits she and the producers have mulled other comic-book crossovers, depending on how successful Supergirl‘s meet-up with The Flash turns out.

“We really had an amazing time making it,” Adler says. “It was tough to juggle people’s schedules. The Flash is a busy man, but in success, we’d love to do this again.” (With reporting by Vlada Gelman)