Someone hand Alex Parrish a three-eyed raven and a sword named Needle, because the Quantico body count is approaching Game of Thrones-ian levels.

I exaggerate, but just slightly. Weeks after we learned that 32 people lost their lives in the terrorist’s second bombing, it looks like another NAT — someone we know and at least nominally care about — has gone to that great briefing room in the sky.

Yep, Natalie survived last week’s bomb-as-belt only to apparently bite it in another explosion. And Alex. Is. Freaked. Out. Read on for the highlights of “Clear.”

EVERYBODY IN THE POOL! | After the terrorist hangs up on Alex, Agent Parrish is on the verge of completely losing her stuff, right there in the alley. Natalie — for those of you scoring at home, she’s the one actually wearing the incendiary device — is much calmer as she relates that she doesn’t remember much after leaving the hearing earlier that day. She theorizes that she was drugged and kidnapped, then apologizes to her former classmate for doubting her. “You were right this whole time,” she says. “Elias was just a puppet, and now we are, too.”

While they’re nervously discussing next steps and talking about who the bomber could be, Alex lets fly one sentence that has me a bit worried: She now knows that the idea of the bomber being a member of their Quantico class “was just a red herring.” Wait, what in the what what? She quickly qualifies by saying that she knows the terrorist was with them at the FBI academy because he or she said he or she saw Alex on her very first day. So that opens the pool of potential masterminds to people like Liam and Miranda… and the NAT class that contains Iris, Drew and Will. A pretty big change to the series’ central conceit, no? We’ll table it for now, but I’ve got my eye on you, Quantico.

MEET THE NEW BOSS | On Alex’s first day back at the FBI, she’s surprised to learn she basically has to start over in operations. Who’d she tick off to get that beginner gig? None other than Hannah Wyland, Ryan’s ex-wife and Alex’s new boss, the new head of the Joint Terrorism Task Force. In an excellent monologue expertly delivered by Eliza Coupe, Hannah lets Alex know exactly why she dislikes her: If you didn’t catch the episode, you really should watch the scene, but the gist is that Alex broke Ryan’s heart and got him shot and then let the hearings about the bombing go on too long.

Just then, the terrorist calls Alex’s burner phone and demands that she break into the task force’s server room and mail some classified files. But first she has to help Natalie circumvent the building’s metal detector, because Nat’s still got the bombs around her waist. I mean, I think she does; that flowy blouse she’s wearing would barely conceal a big lunch, but somehow it completely fools everyone into thinking she doesn’t have C4 strapped to her middle.

There’s a lot of running around, lying and subterfuge (which includes them calling in a fake bomb threat), but eventually the ladies get into the server room and mail the file, which is the presidential candidates’ weekly schedule. Natalie suggests putting a worm in the file, which will allow them to track the terrorist afterward, and Alex is on board.

Eventually, Ryan realizes that something hinky is going on, and he confronts Alex about it. They have a version of the same fight they had last episode, except he’s about twice as patronizing here, and it makes me want to strangle him. “I wish that you would understand what it’s like to see you like this,” he says, which is second only to “Calm down” on the list of things that don’t help AT ALL when talking to agitated people. Back in the server room, the file is sent and Natalie’s belt is disarmed, to both her and Alex’s great relief.

THAT’S THAT FOR NAT | When the worm pings with a location nearby, Nat and Alex go alone to an abandoned building so dark and foggy, it basically screams DO NOT ENTER UNLESS YOU WANT TO GET BLOWN TO BITS. They find a laptop there with the FBI file open on it, but when the terrorist calls and Alex goes outside for better reception, the file sets itself on fire and the laptop explodes… ostensibly killing Natalie.

Alex shows up at Ryan’s apartment soon after, raving and sobbing and begging him to help her. He asks if she wants to be checked in somewhere and she agrees, but when he’s on the phone with whatever psych ward he has on speed dial, the terrorist texts Alex photos of herself right there in the apartment with Ryan. Creepy. She runs out into the street and begs the bomber, via phone, not to hurt him, then promises to do whatever the baddie wants. 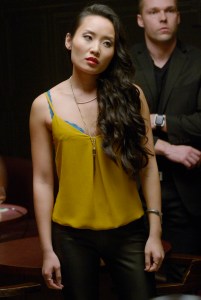 PEOPLE SKILLS | In the Quantico timeline, the lesson of the week is human intelligence, otherwise known as “talking.” After mocking each other based on their Meyers Briggs profiles — a first, I believe, for network TV — the NATs go to a Washington, D.C. bar to try to schmooze some of the regulars into becoming informants.

Let’s shorthand it: Iris uses every last one of her feminine wiles on a busboy. Alex and Drew flirt a little. Caleb and Shelby spend their entire time talking about what they’re going to do with the knowledge that her fake half sister wasn’t kidnapped at all, and that the $5 million she sent for her ransom is in nefarious hands. Will is socially inept. And at the end of the night, it turns out that all of the targets in the bar are actually FBI agents themselves helping Liam and Miranda out with an elaborate test. By the way, by promising to wipe away one mark’s DUI charge and to help another one swindle Customs, Alex and Iris (respectively) suck the most at the task.

CRUCIAL INTEL | The biggest takeaways from the Quantico section of the episode this week are as follows:

* Natalie’s ex is suing her for custody of their daughter, and Miranda grants her a leave of absence from the academy so she can devote her full attention to keeping her kid. It’s sweet. They hug.

* Will has a photo of every NAT pasted to the bottom of his sock drawer, with a few crossed out, Emily Thorne-style. At the end of the episode, he X’s out Nimah.

* Raina meets with the terrorists who probably kidnapped Charlie. Nimah watches from a distance and is appalled. My guess: Miranda probably knows everything that’s going on.

* Iris gives Shelby some intel that will help her track down the people who took her $5 million. But, as Miranda’s voiceover reminds us, just about everyone who helps someone else expects something in return…

* Drew’s girlfriend Alicia was killed in a shootout in 2014, caught between Chicago cops and some armed gunmen. He tells Alex all about it, saying that the pass-the-buck blame game — which also involved the FBI — made him so mad that he joined the FBI to make things right. A little digging by Alex reveals that Liam was involved; the incident was tied to the case Ryan referred to earlier in the season.

Now it’s your turn. What do you think of the series’ sight shift in suspect pools? Is there any way Natalie is alive and/or in league with the terrorist? (She did seem rather cool under pressure, right?) Sound off in the comments!