My, how the worm has turned.

This week’s Sleepy Hollow keeps Abbie and Ichabod separated for the better part of the hour, a move I generally loathe in shows like this one, where watching the two charismatic leads play off each other is the main thrill. But just as I’m about to commit ritual suicide by tossing myself in the path of a giant earthworm monster, the Fox drama gives us a whole new level of Witness to unlock.

Oh, and Joe’s a Wendigo again. Kinda. It’s complicated. Read on for more on “Into the Wild.”

SEE YOU MONDAY! | We open on Abbie and Jenny doing some sisterly bonding at an indoor climbing gym; Jenny notes that her sibling is “in kickass shape.” (Those guns of yours don’t look too shabby either, Jen.) Abbie responds that her time in the catacombs helped her find her “inner Spider-Man real fast” and that’s a good thing, because she’s got a FBI wilderness survival training weekend coming up soon.

But Ichabod thinks they’re going to spend the weekend in Rochester, N.Y., consulting with a professor who may be able to help them figure out what the symbol they picked up in Leeds’ workshop is made of. Abs encourages her partner to go without her, and he does. But before he leaves, he argues that he knew General Rochester, and he “hardly deserves” the honor of having a town named after him. “You haven’t seen Rochester,” she quips. (Heh.) 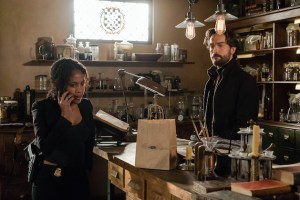 SQUIRM-WORTHY | At the FBI training, Daniel announces that the agents will team up and navigate — without using their cell phones — in order to reach specific coordinates. Abbie and Sophie are put on the same team, and when their third member falls ill, Daniel steps up to replace him.

Everything starts off fine: While Sophie gives Abbie her origin story (missing parents, supernatural suspicion, yadda yadda… and why does Abs look so surprised at all of this? Doesn’t it seem like something Ichabod would’ve mentioned after she returned from Middle Earth?), Daniel and the wilderness guide assigned to their team stumble across an old well that looks like it was recently uncovered. What we know but they don’t: Something’s in that well, and it’s angry.

Pretty soon, Robbie — the guide — gets bitten by a really gross, Flukeman-looking monster. Abbie and Sophie come to his rescue, but he’s in a bad way when Daniel arrives on the scene. (The ladies lie and say a coyote attacked.) The trio builds a rudimentary stretcher and get Robbie to an abandoned cabin where they can spend the night. (Side note: Seriously, how far can they be from where they started? Wouldn’t it just make more sense to navigate back to where all the cars are parked and the cell phones are stashed?) Along the way, Abbie peels off to try to kill the creature herself, but it ambushes her. She hacks off one of its arms, which regenerates within seconds, and then it pins her to the ground. The thing is basically a worm monster made of worms with worms coming out of its mouth and EEEW. Sophie manages to show up in time to save her fellow agent; the thing runs off into the wilderness.

DAMN, DANIEL | At the cabin, Daniel’s got no time for Abbie or any of her suggestions. He snarks that “there’s no room for supporting players on the Abbie Mills show,” prompting her to ask him why he asked her back to work, then? Maybe he didn’t want to, he responds, but won’t say more when she presses him and he takes off into the night to find help.

Sophie later finds an old journal in the cabin, which gives us the back story on the creature: It ravaged a Dutch settlement back in ye olde day, and when it bites someone, that person turns into another worm monster. Oh hey, remember how Robbie got bit? Yeah, he’s a festering pile of maggots with gnarly sharp teeth now, and only Abbie hitting him with a handy beam buys the ladies a little time to figure out how to save themselves.

JUST IN THE ICH OF TIME | Meanwhile, the Rochester professor helps Ichabod realize that the symbol is actually two pieces fitted together… much like the tablet he brought back from his travels. And when Ich puts the two pieces of the symbol on the tablet, he can see what’s happening to Abbie!

With haste, he finds Abbie in the forest and helps her take down the monster (there’s a whole thing about her creating an antidote that will kill the main worm monster, which will then heal the guide, but it’s really not important). All you need to know is that Ich uses his pirate gun and Abbie spears the monster a few times and all is well.

In the aftermath, she’s shocked that the symbol may not be evil, after all. “It may be a tool for our cause,” Ichabod notes, adding, “Sometimes the thing we think will hurt us will actually save us.”

THE WENDIGO WENDI-COMES BACK | Know what won’t save you from Pandora? Bidding on the remnants of her magic box at auction. Jenny and Joe learn this the hard way after they pay $1 million for the mystical item, only to have its original owner show up and demand that they give it back. But when Joe touches it, the Wendigo inside him is summoned again, and he claws at the earthbound goddess until she goes away to lick her wounds.

Later, young Corbin is really messed up about the fact that he’s still a monster, despite Jenny’s assertions that he’s the man she trusts implicitly. And in other troubled couples news, The Hidden One is done with his wife’s inability to help him regain his power. So he goes all glowy and disappears with a new target in mind: The Witnesses.