This post contains spoilers for Friday’s episode of Grimm.

The moment Adalind Schade has feared for months arrived — in snarling, bone-cracking fashion — during Friday’s Grimm.

The hour, which marked the 100th episode for the NBC drama, saw the unexpected (and unwelcome) return of Adalind’s Hexenbiest powers, brought on by a subconscious desire to protect Rosalee, herself and baby Kelly. The metamorphosis began while Nick and Monroe were off searching in Germany’s Black Forest, when Rosalee’s strung-out old friend Tony showed up at the spice shop, demanding money and growing so violent he knocked her to the ground.

Tony wheeled on Adalind when she entered the room and quickly raised his hand to harm her… except he was stopped, mid-blow, by an unseen force. As Ad realized that her dormant Hexenbiest powers were returning — and started chanting a horrified “Oh my god” in response — the thug’s fingers bent backward, one by one, until each broke and he ran from the shop, howling in pain.

After the incident, Rosalee tried to calm her new friend, who feared that the return of her Wesen abilities would mean a swift and definitive end to her relationship with Nick: After all, Hexen-Adalind was a vicious wench who stopped at nothing (poisoning, deception, matters of dubious consent) in order to get her way.

She protested that she couldn’t return to her former self, but a later scene made it seem as though she had no choice: The bitch is (on her way) back.

During a February visit to the series’ Portland, Ore., set, TVLine talked to Claire Coffee and Bree Turner separately about the episode and what it means for the Scooby Gang — and little Kelly’s parents, in particular. Read on for the scoop.

TVLINE | It seems like Adalind getting her powers back surprises her, even though she knew it was a possibility.
COFFEE | It was always a possibility, and the way the writers bring them back is so instinctive — and then it saves Rosalee’s life, so they have this shared secret together, which is really good, but then it also complicates things for another six episodes because now I have a secret that I’m keeping from Nick. Getting her powers back completely jeopardizes their relationship, and then they’re co-parenting with Kelly, so it’s a much more global situation for her life than it was ever before.
TURNER | Rosalee always has known that it was just a suppressant that they gave Adalind. It wasn’t like they took her powers away forever. So it always has been a little bit of a ticking time bomb. But at this point, Rosalee really cares about Adalind. She’s more than proven herself that she’s a changed woman, and Rosalee is also a reformed person so she has more tolerance and compassion when it comes to people being able to have second chances.

TVLINE | She was a bitch when she was a Hexenbiest.
COFFEE | Definitely. 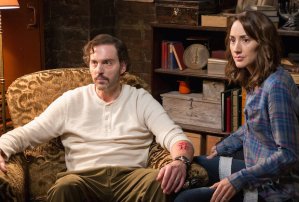 TVLINE | But she’s not now. Is the transformation full-on? Will she go back to being an evil menace?
COFFEE | The fear for her — and what she expresses to Rosalee in this episode — is that “You don’t understand what happened, how that takes over.” Because Rosalee is trying to tell her, “You’re different now. Maybe it will be different.” And she’s saying no, this thing takes hold of you and it controls you. I think for the episodes that follow, you’ll see little bits and pieces of that Hexenbiest weaving back in.
TURNER | Adalind’s vulnerability at that point — she really, really doesn’t want this to be happening. She feels good in who she is now, she has these pure feelings for Nick, and they have their child together. This is just going to f—k everything up. [Laughs]

TVLINE | This is a huge thing to keep from someone you’re living with and sleeping with. Is Adalind worried Nick’s going to find out?
COFFEE | Yes. Constantly. I think the thing that’s helping their situation is Nick’s workaholism and baby times. [Laughs] They don’t see each other as often as a normal domestic partnership would, so she has that. But the thing about the woge, as we know, is it comes out in times of emotional stress. So here’s this emotionally stressful situation… Yeah, it’s intense.

TVLINE | Looking ahead, does Rosalee actively help Adalind cover this up?
COFFEE | She’s not actively helping her cover it up. On the contrary, her loyalties lie with Nick. And that’s very clear. But I think she really wants Adalind to tell him because she feels confident that they have a relationship that can withstand that kind of pressure.

TVLINE | What does this mean in terms of Black Claw/Hadrian’s Wall?
COFFEE | You find out a few episodes after the 100th episode what the larger implications of that will be for her, in this larger picture with Black Claw and where she’s going to align herself.