After five seasons of anticipation, Grimm‘s 100th episode finally, definitively showed us exactly what those much talked-about keys open and it’s… a really old box. With a really old stick inside.

But that nondescript piece of wood turns out to have hidden powers. And — what a coincidence — so does Adalind! Read on as we review the important developments of the supernatural series’ landmark 100th episode.

RUN (FROM THE) FOREST, RUN! | The hour picks up with Nick and Monroe falling through the earth and ending up in a cavern in Germany’s Black Forest. They’re not hurt, and they soon realize that they’re in an ancient church’s catacombs. It’s dark. There are a lot of bones. Things get even creepier when they turn off their flashlights — when a Blutbad is scared, you’re in trouble — but they eventually realize the skulls of “the seven Grimm crusaders, holy crap!” (per Monroe) are pointing them to the spot they’re looking for. Pretty soon, Nick and Monroe are tossing noggins away like they’re foam shipping peanuts and uncovering the “X” they were looking for.

“We found it, even after all the others have searched throughout the centuries!” Monroe says, geeking out breathlessly. But when they try to use the keys to unlock it, absolutely nothing happens. So they pack it up and prepare to take the vessel back to Portland.

Not so fast, guys! Once they’re back on the surface, they see a bunch of flashlights bobbing around in the darkness: The priest from the church has put together a search party and “they’re hunting us,” Nick realizes. The hunting party gets close enough that one of them woges and bites Monroe on the arm, but then Nick and his pal get away and call Adalind and Rosalee with the news that they’ll be on the next flight home.

BRINGING HEXEN-BACK | You’ll have to forgive the ladies if they’re a little distracted when their men call: They’ve just gone through a harrowing ordeal of their own. Rosalee’s stalker Tony shows up at the spice shop, looking all tweaked-out and demanding $5,000. “I mean, look at this place. You probably make that in a day,” he comments, proving to me that he has a really inflated sense of the price of turmeric and the like. When she tells him to leave, he gets violent, breaking the merchandise and giving Ro a wallop that sends her flying.

That’s when Adalind enters and threatens to call the cops. Tony woges and gets all up in her face, then draws his hand back as if to strike her. But his palm is stopped by an invisible force, and both of the women — not to mention Tony — watch in horror as his fingers are broken, one by one. He immediately turns and takes off, while Adalind confronts her new reality: Though she didn’t woge, she’s definitely a Hexenbiest again.

“Oh my god, it can’t be back,” she says. Poor, broken Adalind looks like she’s had her extremities cracked into confetti. “He’ll get rid of us. Please, you can’t tell him,” she begs Rosalee, who tries to comfort her sort-of friend by talking about boosting the Wesen suppressant. But Ad just looks dejected/terrified as she tearfully vows, “I can’t go back to being that.” When the guys call, though, she holds it together as Nick tells her, “I just want you to know that we’re OK and I’ll see you soon,” which is about as close to schmoop as we’re going to get from these two in their present state, I suppose. (P.S. I’ll take it.) 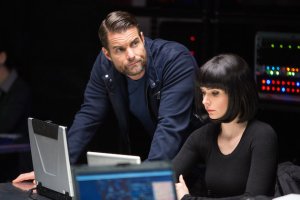 THAT’S SO PORTLAND | Meanwhile, Marwan arranges for Lucien to come and get him, but Eve interferes by having a cyclist knock into the assassin (#Portland). When she pretends to help, she actually snags the killer’s phone and breathes some hinky weirdness into him that’ll keep him unconscious for the foreseeable future. She and Meisner clone the phone, thinking it’ll help lead them to his Black Claw connections, then return it to his belongings at the hospital; while she’s there, Eve wakes him up, too. But the Portland PD intercepts Marwan while he’s waiting outside, and the ensuing chase ends when Renard kills the Dixon-killer.

Thing is, though, Renard later watches footage of Dixon’s speech (and eventual death) and realizes that Rachel was on her phone and looked up at the sniper’s spot just moments before the politician was gunned down. Later, at his place, he growls, “I think it’s time we play a little rougher” — mrrrow, Captain! — but he just means that they’re both going to finally tell the truth about who they are and what they want. Turns out, she’s really a Black Claw operative who’s working with Lucien, and they want Renard to run for mayor. “You’re a hero,” she assures him. “You can win.” (Side note: The Obama-like poster they unfurl while making their pitch is ridiculous and amazing at the same time. I surely hope Sasha Roiz has one hanging in his trailer.)

THE MOMENT YOU’VE ALL BEEN WAITING FOR | Back at the bunker, as Adalind laments her life and the turn it has taken, a nearby glass of water starts to bubble. Look on the bright side, Ad: At least you can return that SodaStream! The guys, who are now back from their European jaunt, gather at the shop with Rosalee, Wu and Hank. There’s some very dramatic music as they all place their keys in the box’s locks and turn, but no dice. (Ha!) The box remains sealed shut. Remembering that Nick’s blood has been the deciding factor in other busted spells, they get to a point where Burkhardt slices his finger and then rubs his corpuscles all over the seal. Poof! It opens.

Inside the box is a roll of fabric containing a totally normal looking stick. Wu notices there’s some writing on the cloth, but then everyone gets distracted because it seems like Monroe is dying: The bite on his arm is infected, and Rosalee fears he has rapidly spreading blood poisoning. While they’re all flapping about and calling an ambulance, someone notices that the wound has started to heal. The entire gang watches as it pretty much seals up, and Monroe wonders what his wife did to help him. Rosalee’s kung-fu is good and all, but she can’t take credit for this one: Nick inadvertently held the stick to his buddy’s arm during the confusion, and it cured him. Chunk of wood for the win!

Now it’s your turn. Grade the episode via the poll below, then hit the comments: What do you think the stick’s backstory is?