Will Once Upon a Time‘s heroes stick together? How will Blindspot‘s Jane handle the blast from her past? Is there hope for Walking Dead‘s “Caryl” fans? Read on for answers to those questions plus teases from other shows.

Any news on how Once Upon a Time‘s Emma feels about Regina actively choosing to stay in the Underworld to help her find Hook? —Amanda
All told, save for Rumple’s bailing on Operation Firebird, you’re going to see among Emma, Regina et al a greater unity than during their Neverland adventure. “We’re a closer unit now,” says Jennifer Morrison. “We’ve been through a lot more at this point, and in coming across these people in the Underworld, we’ve returned to the situation of being heroes that can help. So whereas in Storybrooke we were helping return happy endings, we’re now helping people overcome their unfinished business, so there are callbacks to what we saw in Seasons 1 and 2.”

What is the story with Once Upon a Time’s Hades and Hook? –Emily
“Theyyyyy… are very much aware of each other,” Colin O’Donoghue allowed, when I asked about Hook’s dynamic with the Underworld overlord. “And that’s about all I can say! But they definitely are aware of each other.”

Please, I’ll take anything on Blindspot! —Shawna
Now that Jane has put the brakes on a romance with Weller, she’ll find herself more and more intrigued by Oscar, especially given their loaded history — and series creator Martin Gero isn’t ruling out a rekindling of their relationship. “They have an intense bond, just by virtue of the fact that he knows all the stuff that she desperately wants to know,” he tells us. “Even Kurt, who recognizes her as Taylor Shaw — he hasn’t known her since he was five. And here is this person that knows her, knows what she was like, knows what she did. You can’t help but be drawn toward someone like that.”

Please tell me that Jane the Virgin‘s Rogelio and Michael will continue their epic bromance! They have the best relationship on the show. —Tara
Not only is the bromance rekindled, but Rogelio “takes the reins” of Michael’s bachelor party in an upcoming episode, executive producer Jennie Urman reveals. “You can imagine it’s maybe not the night that Michael and his buddies had in mind.”

Has there been any news on who has been cast as NCIS’ Tess? Seeing that she is to appear in Michael Weatherly’s last episode, time is running out. –Amber
This is where I remind you that “TVLine keeps no secrets,” meaning we will of course trumpet from the mountaintops any casting of a new series regular on TV’s most watched drama. But as of Tuesday afternoon, “We’re neck deep in [casting Tess] at the moment, and I’m thrilled by the number of actresses who have expressed interest,” showrunner Gary Glasberg told me. “We’re just trying to find the right person, the right mix.” As for the male agent that is also being added in time for Season 14, “He will be younger — late-20s, something like that,” Glasberg shared.

Any news on if Scottie Thompson is coming back before NCIS‘ May finale? –John
That would get the gossip mill churning as to the impetus for Michael Weatherly’s exit storyline. But all Glasberg would say on the topic of another Jeanne sighting is: “We’re talking about it.”

I am excited to be 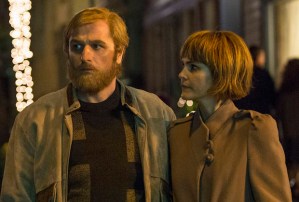 writing in for the first time! Do you have any intel on the new season of The Americans? March 16 can’t come soon enough! –Amy
Season 4 finds the Jennings’ entire way of life in jeopardy as they decide what to do about Pastor Tim, and as usual, Philip and Elizabeth are not in agreement. Meanwhile, Stan and Philip fight, Elizabeth has a major scare and Nina reconnects with [Spoiler]. Also, remember Henry, the Jennings’ neglected son? He’s had (another) growth spurt and is now eyeballing the ladies!

I will take anything you’ve got on How to Get Away With Murder! – Denise
Expect next week’s Season 2 finale to look and feel “very different than anything we’ve done before,” showrunner Pete Nowalk teases. “The finale is very character-revealing, and it’s slower-paced in a way that I find cool and different. But it ends in a way that people will want to see what happens next season.” If that description sends your inner spinning cheerleader into a freefall, you’ll be relieved to hear that the closer (entitled “Anna Mae”) also contains something quite familiar. “There will be a dead body,” Nowalk adds. “But know that I don’t want to do anything you’ll expect.”

Please, Matt, find me some good scoop on Bates Motel. That season premiere left me wanting much, much more! —Adriana
The subject of Norma’s hilariously ill-conceived marriage proposal to Romero comes up again in Monday’s episode — but it’s Romero who broaches it. Twist!

Anything on The Walking Dead? —Jeremy
Rumor has it there’s a Carol/Daryl moment in this Sunday’s episode that “Caryl” shippers will quite like.

What can Gotham fans expect from the Bruce/Selina relationship? –Catherine
Though Selina is a “freelancer” who “doesn’t like any commitments — she’s like a cat in that respect” — Camren Bicondova says that her agile alter ego “does allow Bruce to come into her life a bit more, and in a different way than she would have in Season 1. You’ll see a different aspect of their relationship that shows the audience that Selina Kyle has some input into what Bruce Wayne eventually becomes, which I think is really cool.”

I’ll take any scoop you have on Legends of Tomorrow! –Ross
When I visited the cast on set, Caity Lotz was quite stoked for viewers to see a “totally cool, giant swordfight” that takes place on or around Episode 10. As for tonight’s episode, which takes us to the 1950s for a couple of weeks, Brandon Routh promised “nothing crazy” fashion-wise for the men, outside of “three-piece suits with vests and bowties.”

I have a question about how promotion works for a TV show. Why would a network not have leads for certain shows do interviews or any kind of promotion? Could it be because of geography, for a show that doesn’t shoot in L.A.? Is it due to cost? Is it possible it’s because the actors don’t want to? Or are there other factors that go into those decisions? Thanks for any light you can shine on that process. –Lori
Among the possible reasons you suggest, you may notice that the longer in the tooth a series gets, the less often its first-tier leads will do PR. (I know specifically of one network drama where after the first couple of seasons, the leads declared, “We did the heavy lifting for the show’s launch. We’re done now.” Not helping matters was that one of those actors got blindsided by some verboten personal questions during one interview.) I’ve also heard talk that the lead on no-longer-new series set a limit of three (3) total interviews going into this season. On the flipside, you see pros like Thomas Gibson regularly promoting Criminal Minds, even 11 seasons in. It’s definitely a mixed bag out there. 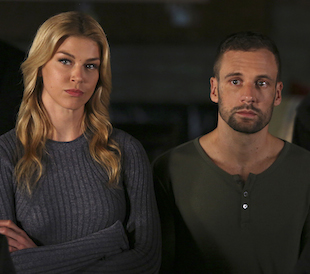 either S.H.I.E.L.D.‘s Lance Hunter or Bobbi Morse? —Wheaton
The kicker of the next episode uncorks a twist that promises a showcase for the couple, as the ABC makes the most of them before the Marvel’s Most Wanted spinoff possibly steals them away. “We hope that one day they may have their own show,” says EP Jeffrey Bell, “but while they’re on S.H.I.E.L.D., we want to take advantage of who they are and give the audience as much of their relationship with one another and with other people as possible, to make that really satisfying. We are aware that there is a potential imminent end, but they won’t be neglected [in the meantime].”

Any hints as to who the traitor is on Agents of S.H.I.E.L.D.? –Susan
Indeed, in next week’s episode a traitor is revealed to be compromising Coulson’s agenda. Though the more pertinent question may be not “Who?” but “Why?”

Any spoilers for Jake and Amy on Brooklyn Nine-Nine? —Kate
Even though she’s hiding behind more and bigger desks, expectant Melissa Fumero is on track to appear in the season finale. “Unless she’s in a hospital right now giving birth, she’s finishing out the season,” series boss Mike Schur told us this week. In fact, as Fumero enters the final stretch, “[The writers] came up with an incredibly funny and smart way to deal with her pregnancy, visually. As a person who watches TV professionally and is acutely aware of the thousands of ways that people have invented to hide pregnancies, I think you’ll appreciate its particular specificity.”

Will Patty Spivot ever return to The Flash? –Merilyn
Quite possibly, though that seems a bit less likely now that Shantel Van Santen’s USA Network pilot, Shooter, has been ordered to series. But in a best-case scenario, “We have not seen the last of Patty,” exec producer Andrew Kreisberg told me at the time of her send-off. “We very consciously did not kill her.”

Real questions, real answers. If you need the Inside Line on a favorite show, email InsideLine@tvline.com!  (With reporting by Vlada Gelman, Rebecca Iannucci, Michael Slezak and Scott Huver)