Pawn Stars personality Austin “Chumlee” Russell was arrested Wednesday after police say they found at least one weapon and several illegal drugs at his home, our sister site Deadline reports.

Las Vegas Metro Police Department officers were at Russell’s house to serve a warrant for a sexual assault case; the reality-TV star has not been charged in conjunction with that investigation, which is ongoing. 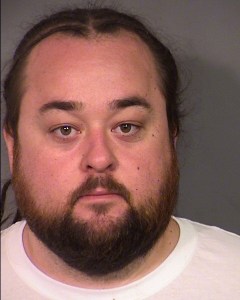 According to reports, police found at least one weapon, marijuana and methamphetamines at Russell’s home. The 33-year-old employee of the World Famous Gold & Silver Pawn Shop was charged then booked at the Clark County Detention Center (mugshot at right), where he remains in custody on $62,000 bail, according to the Las Vegas Sun.

Russell is a major player in History’s Pawn Stars, which follows Rick Harrison, the co-owner of the aforementioned Las Vegas pawn shop, and his colorful family and staff. Per Deadline, both A&E Networks — History’s parent company — and series producer Leftfield Pictures declined to comment on Russell’s arrest.

The Sun also quoted Harrison offering vague support for his co-star. “We don’t have details yet,” he said, “but are here to help Chumlee however we can.”