Don’t get caught without a box of tissues during Thursday’s installment of How to Get Away With Murder (10/9c on ABC).

“If you don’t cry, your heart is made of coal,” says executive producer Pete Nowalk. “I never cry — and even I cried at this one.”

While Nowalk won’t confirm that the hour’s most devastating moments involve flashbacks revealing the fate of Annalise’s pregnancy from 10 years ago, he does tease that it marks his favorite performance by Viola Davis since the series began.

The penultimate Season 2 episode, ominously titled “There’s My Baby,” feels more like a season finale, adds Nowalk, with a laugh. “At one point, I was like, ‘Oh my God, I wish this was our finale, because I don’t know what to do next!'”

Read on for more intel about Annalise’s baby bump, the shocking sex scene teased by ABC’s promo department (could it be Asher-Connor?) and the endlessly creepy Philip.

TVLINE | So, the promos for Thursday’s episode promise to reveal what happened to Annalise’s baby. But ever since your first episode of 2016, we’ve been getting “10 years earlier” flashbacks to a super-pregnant Annalise — knowing that she does not have a 10-year-old son in the present. It’s created this overarching sense of dread building for five whole weeks now.
That’s my favorite thing in the world. 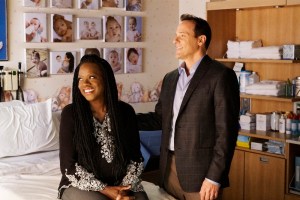 TVLINE | Do you feel like a terrible person for doing that to your audience?
[Laughs] No. It adds to the story that you’re not just waiting for a surprise —  you’re also waiting for doom. I mean, it makes me very uncomfortable, but I also love how gripping that is.

TVLINE | As Eve said in last week’s episode, Annalise is so far along in her pregnancy that the baby is definitely viable. We’re talking super-pregnant!
That’s what makes it so sad. I was really excited in [last week’s] episode that we got to see Annalise admit in a very vulnerable way, even to herself, that she wants a baby. We’ve hinted that she’s has some miscarriages in the past, and this whole time she has not wanted to believe that it’s something she could have or that it’s something she even wanted.

TVLINE | Is there any chance that she gives the baby up for adoption, that this baby lives, or am I fooling myself?
All these things came into my mind, too, when we were writing it. What Annalise just saw [Rose stabbing herself in the neck and bleeding out on the floor in an attempt to protect Christophe] makes anything possible, considering that was a mother acting to protect her son. Does that change Annalise’s point of view? Does that drastically change her feelings about this baby she’s about to have? That’s a possibility.

TVLINE | You did plant a seed when Eve suggested last week that Annalise could give the baby up for adoption. And nothing you guys do ever seems to be accidental.
I love that about Eve, that she’s there for Annalise no matter what. It’s kind of like a Meredith/Cristina relationship from Grey’s Anatomy. Shonda would always say they would help each other bury a dead body. I feel as though Eve was like, ‘I’m going to raise your baby if you want me to.'”

TVLINE | Last week ended with Philip hiding in Wes’ apartment, and jumping out on top of Annalise. There’s a huge assumption from all the characters that he’s the worst guy ever — but we don’t know for a fact that he’s guilty of much of anything.
Sometimes, there are just terrible people on our show. We don’t want to give nuance to them. So he definitely has been painted as a secret baby incest weirdo. And it’s a very weird behavior to break into some stranger’s apartment and hide under his bed, and then grab someone by the ankles and climb on top of them. That’s weird. I’ll say that.

TVLINE | Can Annalise and the Keating Five live with themselves if Catherine ultimately sits in a prison cell for 10 or 15 years for killing Emily Sinclair and shooting Annalise — crimes she did not commit? Are they those people?
That is something they all feel guilty about — and they’re all dealing with it every day. That’s what probably drives Michaela back to Caleb all the time. She can’t just leave like she should and let it be. She keeps going back. So I think they’re normal that way, but they’re also learning to be survivors. I would say we all do that in some way. We all turn a blind eye to the ways that we benefit from other people’s suffering. They’re just doing it in a much bigger way. 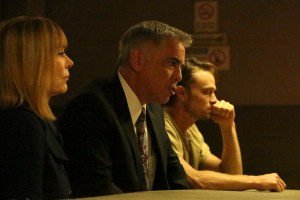 TVLINE | Speaking of people with murky intentions, what can you tell us about the Mahoneys. And will this family’s arc extend into Season 3?
I can’t answer one way or the other without giving away too much. Obviously, the Mahoneys are responsible for Wes’ mother’s death. And you will find out more of what Annalise’s history is with the Mahoneys in this week’s episode. Basically, I can’t answer any more than that. But it’s a good question.

TVLINE | Wes and Annalise haven’t spoken in a long time. They’ve been leaving stuff under each other’s doors, sneaking into each other’s houses. Will a confrontation happen between now and the season finale?
It’s not a guarantee. But there will be communications between them.

TVLINE | Promos for this week’s episode promise “the wildest hookup in Murder history.” Are you saying we’re going to get something crazier than Connor’s copier-room encounter?
That wasn’t crazy so much as it was just awesome. [Laughs]

TVLINE | OK, but are the promos overselling the scene – or can you promise that it will be next-level crazy?
I don’t know. I didn’t even know about that promo. Our show is shocking enough. I don’t think the romantic entanglements are as shocking as the twists in the murders. So, I wouldn’t get too hopeful. But I’ll say that I really like it.

TVLINE | Any hope for the Connor/Asher ‘shippers?
Anything is possible on this show. I’m a big believer that people, especially twentysomethings, are more free and like to experiment. So, yeah, anything’s possible. All the ‘shippers can have hope.

TVLINE | If memory serves, I asked you about a Connor/Asher hookup around this time last year — and you dismissed it out of hand. So this is progress!
Oh, Michael, I’ve got another season under my belt. I realize anything is possible because you have to keep making episodes. You’ve got to give them some story. I let go of all of my morals and my high ground.

TVLINE | You’re saying it’s made you a better writer — and a worse person perhaps?
Exactly. You’ve got to keep the train going.