THE PERFORMANCE | How to Get Away With Murder‘s Annalise Keating and Asher Millstone couldn’t be further apart in style and temperament if their names were Trump and Sanders. And yet as the show’s Season 2 fall finale descended into the stuff of nightmares, their portrayers Davis and McGorry not only made plausible the dozens of “What the heck is happening?!” plot twists, but ensured they were emotionally gripping, as well.

Davis’ work covered the gamut from terror to rage, from uncontrollable doubt to undoubtable control, as Annalise made the decision to cover up Asher’s murder of ADA Emily Sinclair for a multitude of reasons: Her guilt over driving Asher’s father to suicide; her dread that her lover Nate (who’d clashed angrily and publicly with Sinclair hours before her demise) might be falsely accused of homicide (again); and her very practical anxiety that an under-interrogation Asher might expose the ugly, criminal secrets held close by herself and her entire law-firm family.

One stunning scene — which unspooled twice during the episode — found the camera circling Annalise like a hungry shark. Over the course of a nearly wordless 45 seconds, Davis allowed us to see her character absorbing the sheer horror of an unheard phone call — gasping for air, hands visibly trembling, nose running — and then just as suddenly, arriving at some finite realization, composing herself, making another call, and gruffly imploring, “Tell me you’re still at the house.” Later, the scene repeated itself, only this time with the added information that Annalise was processing Bonnie’s grim report of Sinclair’s death, Annalise’s mind vibrating with voiceovers from her coworkers outlining all the complications that left her cornered — until her brilliant legal mind formulated a plan to save them all. It speaks volumes that this might rank as the Emmy-winning actress’ finest work on the series to date. In other words, she might need another acceptance speech, come next September.

McGorry, meanwhile, whose “Doucheface” law student has often been HTGAWM‘s comic relief, proved absolutely revelatory as his shellshocked Asher learned of his father’s suicide, then dealt with his mother cruelly blaming him for the tragedy. The scene culminated with Asher, alone in his car, beating the steering wheel as his face transformed into a mask of pure grief, tears flowing and drool dripping down his chin. Later, when Sinclair began to taunt him about his loss, McGorry’s subtle shift in expression telegraphed his character’s mental break, as he switched his car into reverse, hit the gas pedal and ended the life of the ambitious prosecutor who’d ensnared him in her web. For the remainder of the hour, the actor portrayed Asher as a shell of a man — barely able to process the murder he’d committed, and resigned that no matter the machinations of Annalise and her team, he was doomed to prosecution and imprisonment. Whether or not that’s true, McGorry’s powerful work made it clear Asher will never be the same again.

HONORABLE MENTION | It was the worst case scenario Miranda Otto‘s CIA Berlin station chief Allison Carr had been dreading: Carrie was now in possession of the hacked documents that, once decoded, would out her as a Russian spy. As Saul delivered the ominous news to her in Sunday’s Homeland, Allison struggled to prevent the paralyzing, oxygen-depriving terror from overtaking her body (she couldn’t very well let Saul see her sweat!). Saul eventually left her alone and suddenly her knees buckled and she just fell to the floor. For the next 60 seconds, Otto deftly conveyed Allison’s despair without uttering a single word — she was just a nauseous, hyperventilating basket case. It was panic-attack performance art, and it allowed us to see Big Bad Allison at her most vulnerable and, dare we say, sympathetic. 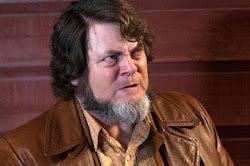 HONORABLE MENTION | FX’s Fargo this week brought a boozy barrister to a gun fight, and it made for edge-of-your-seat television. As Karl Weathers, Parks and Rec alum Nick Offerman to date — and right up until this week’s intense face-off — has mostly offered amusement. But that changed, drastically, when the conspiracy nut/lawyer was tasked with confronting Bear Gerhardt’s small army, hoping to ward off an assault on the sheriff’s office. Fingers trembling as he retrieved a smoke, Offerman showed us a man struggling to sober up, quickly, before launching into his argument. And what a case he then made, juuuuust barely convincing grizzled Bear to lower his weapon, lest “the boy,” Charlie, be hit with a harsher rap than “five years with good behavior.” Karl’s look of relief, the do-or-die battle won, reflected ours, as the stand-off was silenced. 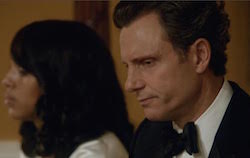 HONORABLE MENTION | To be sure, Scandal’s Kerry Washington brought her A-game during the fall finale’s eight-minute-long break-up scene. But it was Tony Goldwyn who put that lump in your throat as the First Romance unraveled at the seams. Goldwyn led with indignation, roaring, “Do not lie to me!” as Liv made excuses for going AWOL. When Olivia then bemoaned the “cage” she now lives in — peppered with assorted unsaid, harsh truths about the “ineffectual” POTUS — Goldwyn visibly leaned back as the verbal assault blew Fitz away. And just look at his face, the hurt, when a crushed Fitz realizes, “You liked me unavailable.” Washington unleashed the reasons for the ill-fated romance, but Goldwyn mirrored our own reactions, ultimately calling a time of death for “Olitz” with a quiet, “We tried.” And yes, they did.