As promised, Tuesday’s Teen Wolf season finale put an end to the Beast’s reign of terror in Beacon Hills. And it’s all thanks to… Allison?

That’s right, friends, Scott’s first love — who has actually had a remarkable presence this season, despite being dead — came through for him once again during his final battle with the Beast. Allow Stiles to clarify:

In the tunnels, when Sebastian had his hands around Scott’s throat, the guy probably didn’t even know what he was doing. His claws got into Scott’s neck. He was going to kill him. Then he stopped and said a name: Marie Jean. … He saw Allison. … It gave Scott a chance to break free. She saved him. Allison saved his life.

Even after all the dramatic, friendship-centric speeches Stiles has delivered over the years, that one hit me right in the blood-pumper. And now that we’ve sorted that out, let’s check in with the rest of Scott’s pack:

* First thing’s first: Mason lives! A well-timed (and very loud) scream from Lydia helped the wayward chimera remember who he really is. (And that little moment between Mason and Corey? Adorable.)

* With an assist from Kira and the skinwalkers, Theo was treated to an unexpected family reunion with his sister. (Think less picnics with matching t-shirts and more Drag Me to Hell.)

* After years of urging Stiles not to get involved with police business, Sheriff Stilinski finally told him, “Welcome to your future career in law enforcement.” (“Officer Stiles” has a nice ring to it, no?)

* Despite everything Malia went through in the finale — including defeating the Desert Wolf alongside Braeden, who could really use some target practice — the were-coyote seemed relatively carefree as she entered Beacon Hills High at the end of the hour. Then again, after the life she’s lived, it would take more than a homicidal parent to ruin her day. 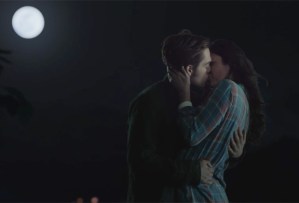 * An injured Hayden turned down a trip to the hospital, opting instead for a bite from Scott. (Don’t even lie, you totally got choked up during her yellow-eyed reunion with Liam atop Mt. Green Screen.)

* After (briefly) returning to Beacon Hills, Kira made a U-turn and rejoined her skinwalker sisters in the desert. She’ll be there for “as long as it takes,” and if you think you’re alone in worrying about Arden Cho’s attendance in Season 6, you’re not.

And then there was that final shot of something emerging from the Dread Doctors’ laboratory. (Spoiler alert: It was the Nazi werewolf we learned about a few weeks ago, showrunner Jeff Davis confirmed to TVLine, and he’s going to be a big part of Season 6.)

Your thoughts on Teen Wolf‘s Season 5 finale? Hopes for Season 6? Drop ’em all in a comment below after grading this week’s episode.