Once Upon a Time‘s heroes braved the Underworld in the Season 5B premiere, and what they found there was a bloody Hook and a larger purpose.

IN THE UNDERWORLD…. | Setting the stage for the otherworldly journey, Emma receives a “long-distance call from an old friend,” in the form of Neal Cassidy (almost-secret guest star Michael Raymond-James) hopping into her Bug with her. He strongly advised her not to set foot in the Underworld, since it’s “not an easy place to leave” — 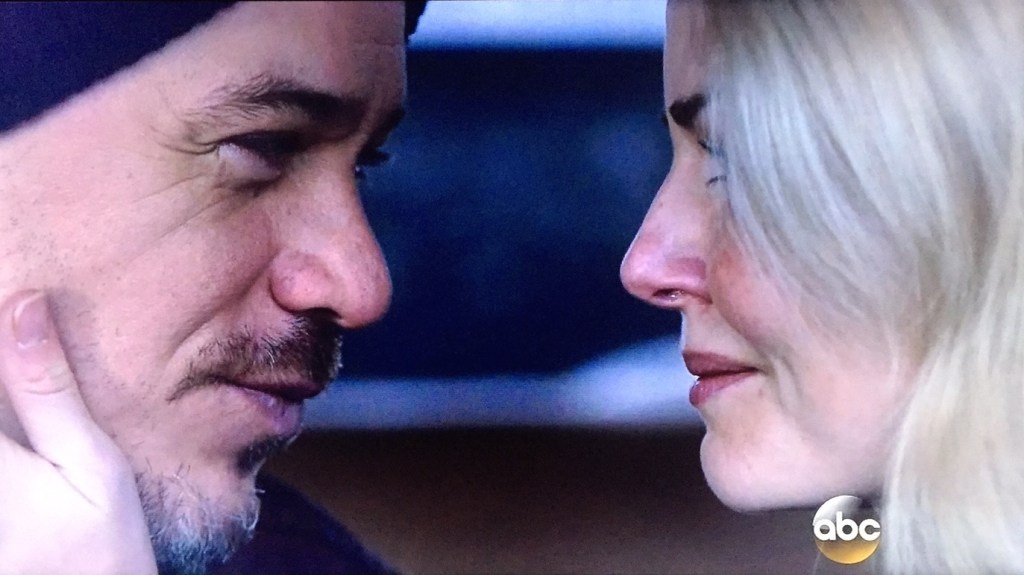 besides, her mission to find Hook and split/share her heart won’t end the way she thinks it will. Invited to help, Neal explains that he is not among those “in limbo” in the Underworld, seeing as he has no “unfinished business.” Rather, “I’m someplace where I’m happy,” he reports, before planting a warm kiss on his true love’s forehead. “I love you, Emma. I always have, and I always will,” he reminds before leaving, at which point Emma awakens on the boat ride to the Underworld.

Upon arriving in the screwy Storybrooke — as Regina wonders, Did the Dark Curse takes its cue from the Underworld or vice versa? — the gang splits up. Snow White scouts out Granny’s diner, where she meets up with the Blind Witch and unwittingly fields a liplock from Charming’s twin, James. When Henry shows up with the key to what used to be his father’s room above Granny’s, Emma assures him that Neal is not in the Underworld but “a better place.” Over at the mayor’s office, Regina reunites with Cora, who urges her daughter to get Henry and her “thief” on the first boat out of Dodge. “You must do what’s best for you,” Cora asserts, saying that the mission to find Hook is simply “too dangerous.” And if Regina doesn’t go? Cora poofs them down to a fiery cavern, where she dispatches with some rando dude, warning that Regina’s father will be the next to perish if she loiters.

Rumple meanwhile visits his shop, where the sight of Chip sparks a flashback to him bidding Belle adieu, saying he’d only be “gone a day.” When he then goes to his wall safe, Dad aka Peter Pan appears. Pan says that he misses “the world above” and that he could return, were one of Rumple’s friends not to survive the Underworld — a soul for a soul and all that. As a gesture of good will, Pan gives his son the potion he was looking for, which allows communication with the dead. 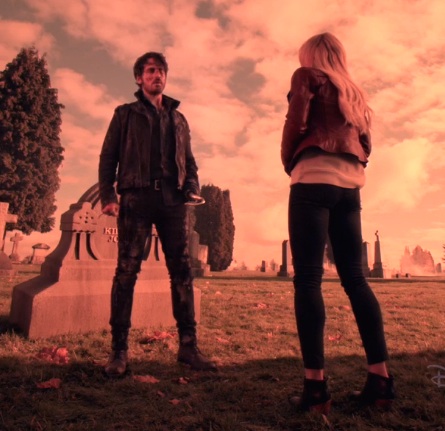 the potion on the grave of one Killian Jones, the bloodied, beaten-to-a-pulp pirate only appears as a flicker, the spell unsteady. Emma comes away from the harrowing encounter more resolved than ever to find her love ASAP, but urges Regina to catch that boat back home, with Henry and Robin. Regina then summons her father with the potion, and in a warm moment she apologizes for killing him and he readily forgives. Henry Sr. then warns that Cora is playing Regina, that his daughter’s friends need her as part of this mission. Regina frets about causing him further pain as a result, but as he explains, “If you stay, you spread hope… I won’t have died in vain.” On that note, Henry Sr. is transported to the fiery pit, where Regina follows to beg her mother not to dispatch with him. “I came back to help not just friends but everyone,” Regina states to little effect, as Cora conjures the funnel of flame to consume her husband. But after Cora leaves, the inferno dissipates and Henry Sr. emerges unscathed. Rather, a walkway to a bright, glowy, Heaven-ly place appears.

“My unfinished business was you,” Henry Sr. realizes. “Now you are free of [Cora] and I’ve never been more proud.” Regina’s father then meets his namesake, who thanks Grandpa “for believing in her like i do.” Henry Sr. in turn thanks the lad “for being there when I couldn’t,” before leaving for his final destination.

As the heroes reconvene by the wrecked clock tower, Henry announced “Operation Firebird,” through which they will set out to not only find Hook but help others in the Underworld with “unfinished business.” Rumple, though, wants no part of the “asinine pursuit” and washes his hands of it. After Regina notices the clock hand tick, we see Cora sneak into the library and take the elevator down… down… down, to Hades’ lair. There, the Underworld overlord enjoys a pedicure as he berates Cora for failing him. After all, a ticked clock equals a soul exiting his domain. As punishment, Hades notes that Cora forsake her daughter Zelena in the course of escaping the life of a miller’s daughter — and as such, that is what she shall be again “for eternity,” he cackles, as his hair erupts in blue flame. 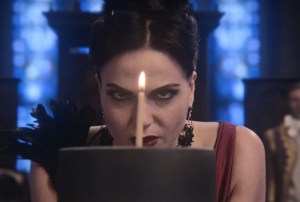 Evil Queen Regina’s birthday, and there is nothing she wants more than Snow White’s heart to crush. When Henry Sr. makes the mistake of Skyping with his Wonderland-banished wife via the Magic Mirror, Cora ultimately escapes back to the Enchanted Forest realm, where she poses as Regina’s father to pluck Snow’s heart right out of her. But when Regina unwraps the unexpected gift from her mother and goes to end Snow’s life, we see that all the bandit suffers is a case of “Jiminy Cricket in her blouse.” Turns out, Henry switched out Snow’s heart with that of a guard. Regina then shrinks Daddy into a heart box, only to see him get yanked to Wonderland along with Cora when Regina has the mirror take Mother back to whence she came. 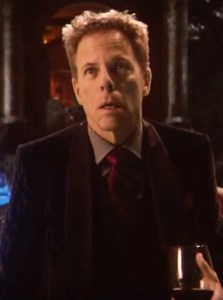 suggested by his swift action against Cora, Hades (played by Ally McBeal‘s Greg Germann) “is a control freak, a manipulator — and he’s deliciously evil, too,” purrs Lana Parrilla. “He’s very powerful, so it becomes a question of, ‘How are we going to take this guy down?'” Adds Josh Dallas, “Oh man, Hades is bad news, and the gang has to figure out how to topple this guy somehow. He definitely wants control, let’s just say that.” As for Hades’ end game with regards to Emma, Regina et al, “Like most of the characters in the show, he has a very specific agenda. He has a very specific goal,” says series co-creator Eddy Kitsis. So, is it to have the Storybrooke heroes leave ASAP… or to never, ever leave? “Both,” hints Kitsis.

What did you think of Once’s Season 5B premiere?