The covert op is up.

TVLine can now confirm that Michael Raymond-James — who stars on NBC’s midseason drama Game of Silence — recently found time to reprise his role as Once Upon a Time fan fave Neal Cassidy.

As teased by this TVLine Blind Item, Raymond-James last month sneaked back to Vancouver to shoot a scene for the Season 5B premiere (airing Sunday, March 6 on ABC), in which Neal’s one true love Emma braves the Underworld… to save freshly deceased Hook’s life.

And when we say he “sneaked,” we mean it. I hear that because of the mutual admiration he shares with Once creators Adam Horowitz and Eddy Kitsis, MRJ gamely traveled with a group and incognito, especially as he deplaned in Vancouver. And rather than hole up at one of the usual hotels where guest actors passing through town are spied on the regular, he bunked with friends outside of the city.

As a final safeguard, Raymond-James’ scenes were filmed indoors on a soundstage — away from the ever-looming paparazzi known to spoil many an outdoor shoot. (Alas, despite all the secrecy, two tiny hiccups threatened to expose his return, including a castmate’s quickly deleted Instagram. Oops.)

Now, with hundreds attending this weekend’s 100th-episode screening, the cat was poised to spring out of the bag.

The nature of Neal’s reappearance is under wraps but the possibilities are many, seeing as in Once Upon a Time‘s Underworld, the dead only loiter if “you haven’t found closure yet,” 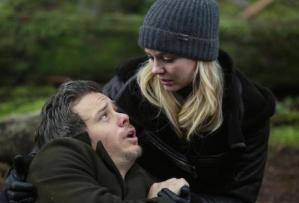 co-creator Eddy Kitsis recently told TVLine. Or, Raymond-James could again appear via a (new) flashback, as he most recently did in the Season 3 finale (after being killed off months prior).

When asked if Neal’s name would come up as Emma, Rumple et al traverse the Underworld, Kitsis said, “I think that it would be very disappointing for her to go down there and not have somebody talk about Neal.”

In addition to his role on NBC’s midseason drama Game of Silence (premiering April 7) — in which a rising attorney (Revolution‘s David Lyons) finds his perfect life upturned when his long-lost childhood pals (Raymond-James’ Gil included) threaten to expose a dark secret — the Once alum’s recent TV credits include History’s Sons of Liberty miniseries, as Paul Revere.

How do you think dearly departed Neal factors into Emma’s Underworld trip?