Warning: The following story contains massively major spoilers about House of Cards Season 4, Episode 4. Proceed at your own peril!

If you’re reading this story, then you know that the fourth episode of House of Cards‘ just-released fourth season marked the end of the road for original cast member Nathan Darrow and his beloved bodyguard character Edward Meechum. You don’t, however, know the following: Why Meechum died, the one regret Darrow has about his alter ego’s final heroic act, and whether Meechum continued to give his boss, um, secret service following Season 2’s big mé·nage à trois.

In the following post mortem Q&A, Darrow offers some insight into those burning questions and more.

TVLINE | There are a lot of House of Cards fans in mourning this weekend.
That’s very nice of you to say.

TVLINE | How did you learn that Meechum was going to die?
I found out not long before we started shooting the fourth season. [Series creator] Beau Willimon told me where the story was going.

TVLINE | What was your reaction?
In terms of the story, my reaction was, yeah, that make sense. I’ve [long thought about] what would be Meechum’s end, and that was one of the scenarios that occurred to me as an appropriate way to close him out.

TVLINE | How did it feel emotionally?
Well… when you’re an actor you know the experience is going to [eventually] end. It definitely was emotional not to be around [the cast anymore]. But it was nice to have the time. And it was nice to work on the character. And now he’s free, wherever he is. [Laughs]

TVLINE | Meechum was given some really nice moments in the three-plus episodes leading up to his death — more than he probably had all last season combined. Were you happy about that?
Yes. And it wasn’t this kind of heavy-handed, “Oh, here who Meechum is before he dies!” I thought it was really well done. I hope what comes across [in these episodes] is that Meechum’s devotion to Frank, and also to Claire, was what was singularly driving him. The only thing I think Meechum would change about the ending is Frank would’ve walked away without a bruise. [Laughs] And, actually, that’s what I would’ve argued for, too.

TVLINE | You have to give Meechum some credit — he managed to shoot and kill Lucas while he himself  was on the ground dying. And he ultimately saved Frank’s life.
That’s true. I’m nitpicking. [Laughs] Nobody bats a thousand. But Meechum would’ve preferred to bat a thousand. 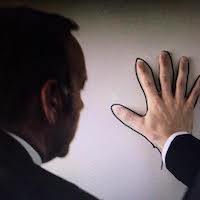 TVLINE | I loved the scene in Episode 4 where Frank traced Meechum’s hand on the wall. Was that fun to shoot?
It was great. It was nice for that character to [get an opportunity] to relax. I thought the scene was silly and whimsical, in the best possible way. It also happened to be my last day on the set. There was all kinds of stuff going on for me [behind-the-scenes].

TVLINE | Like what?
Well, when you end an intense involvement in something creative with people you’re not going to see as much anymore…

TVLINE | A cake? Speeches? Hugs?
Oh, sure. There were hugs. There were words. It was nice.

TVLINE | What was your goodbye with Kevin Spacey like?
Oh, gosh. I don’t know. We’re good friends, so it wasn’t really a goodbye. But we sort of locked eyes and closed out our work [on the show]. Hopefully it’s not the last thing we do [together].

TVLINE | Was he sad to see you go?
I hope so. [Laughs] He’s a total pro. He knows this is how it all works. We’re telling a story. We want [viewers] to have all of these feelings.

TVLINE | Prior to this, the most talked about Meechum scene was the infamous threesome moment with Frank and Claire in Season 2 — something that hasn’t been revisited since. Do you think Frank and Meechum continued to remain intimate?
I don’t think [the answer is] yes or no. A smart writer tells their story and then [leaves] these little doors within the story that the audience can open up with their own imagination. I think it’s more interesting to leave it there. I think Meechum just wanted to be of deep service to both Frank and Claire, and it didn’t matter what form that took.