I’m going to come out and say it, Sleepy Hollow faithful, and you can holler if you hear me: I don’t care about Pandora’s origin story.

So the fact that this week’s episode spends so much time establishing Mrs. Hidden One’s backstory is a bit of a bummer, especially because the hour also includes a real breakthrough in the Witnesses’ relationship. Wouldn’t it have been cool if the show have devoted more time to exploring Abbie’s important revelation?

But if wishes were golden hourglasses, we’d all ride, I suppose. (Or be omnipotent. Or something.) Anyway, let’s review what happens in “Dark Mirror.” 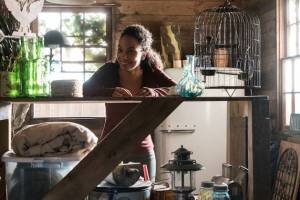 A BRUNCH HUNCH | Abbie goes for a run in the woods, is struck by more flashbacks of being in the catacombs, then comes home and fondles the giant symbol she painted on her shed’s wall. She thinks she’s holding it together well, but during a Team WTF brunch, Ichabod and Jenny have a little confab in the kitchen: They both know Ab is hiding something, but they’re not sure what it is.

Other highlights of the brunch: We learn that Ichabod’s application for American citizenship was turned down because he missed his formal interview (he was rescuing Abbie from the catacombs, which is just like when Beverly Hills, 90210’s Dylan missed his SATs because Brenda had a Very Special Episode about breast self-exams), and Jenny introduces Crane to mimosas (so you really came out ahead, anyway, Ich).

THE DEVIL’S DETAILS | Abbie gets a call about some deaths, and when she and Ichabod arrive on the scene, they find two professors of antiquities slashed and poisoned and all kinds of murdered by “a menagerie of evil,” as Abbie puts it. The killings match some we saw earlier in the episode, so we already know what the Witnesses don’t: that a horned creature in colonial garb is responsible, and he’s doing The Hidden One’s bidding.

Pretty soon, Mills and Crane realize that the creature responsible for the deaths is likely the Jersey Devil, and that said devil is actually Japeth Leeds, a rival of Benjamin Franklin’s whom Ichabod knew back in ye old day. Ichabod and Abbie go to the site of Leeds’ old laboratory — which is still there, underground — and find the following: dust, candles, more dust, a Christmas-ornament version of Abbie’s favorite symbol (more on that in a sec) and Leeds’ steampunked-out film projector.

Via the clunky old projector (which, as Abbie notes, was way ahead of its time), the Witnesses watch a movie all about The Hidden One — whom Leeds worships — and Pandora. The short version: Pandora was a human who served the gods and was nice to The Hidden One, who’d been banished to the catacombs because of his eeeeeeevil nature, because she felt bad for him. So he gave her a box full of all the badness in the world — aka Pandora’s box — and she opened it to kill his brother god and something about an hourglass and… guys, I can’t. Let’s just move on. The upshot is that Leeds is trying to recreate the hourglass to restore power to The Hidden One, and he’ll have to melt the artifacts he stole from the antiquities scholars in order to do so.

PRIORITIES, ABBIE! | Leeds, of course, interrupts the Witnesses as they’re pawing through his lair. And his attack leaves Ichabod poisoned (thanks to Leeds’ scorpion tail) and Abbie knocked out. But when she comes to and realizes her partner is about to kick it on the floor, she heeds his gritted-out instructions and concocts an antidote to the poison. Still, the symbol beckons her, to the point that she ignores her writhing partner’s dying pleas for help in order to stare at the rune like it’s a Where’s Waldo? spread.

Finally, she comes to her senses, pours the mixture down Ich’s gullet and then cradles both him and the symbol to her chest while she waits for the antidote to work. It eventually does, but she’s busted: Abbie admits she was “distracted” at the worst possible time, and he acknowledges “It has a hold on you.” Abs eventually cops to the fact that her obsession has been going on for months, and this quick, quiet scene between Nicole Beharie and Tom Mison is a bright spot in the episode.

ZAPPED | The pair eventually tracks Leeds to a high point where he summons lightning to melt the artifacts and forge the hourglass, but by the time Abbie spears him with his own lightning rod — and then Mother Nature takes him out via sizzling bolt — the fruits of his labors have disappeared. Later as we watch, the all-powerful hourglass rises out of Pandora’s Jacuzzi of evil. I’m still not real clear on this whole hourglass thing, but that just can’t be good.

Back at Casa Witness, Abbie can’t let go of the symbol, and it’s a little awkward when Ichabod comes home and catches her fondling it. (Side note: That sentence sounds so much dirtier than it really is.) She tearfully admits that she needs his help, and they have another nice, supportive moment.

THIS TRAILER AIN’T A-ROCKIN’ | In other news, Jenny and Joe’s post-brunch sex plans are thwarted by her beat-up old trailer springing a massive leak in the kitchen. I suppose this is a nice change from the reason most people’s post-brunch sex plans are thwarted: day-drinking and too many waffles. Anyway, Joe wants to use the “blood money” from Nevins to fix her place… but he oversteps and just buys her a giant new Winnebago instead, and she is IRKED. Then he puts everything back the way it was, and she is CONSIDERABLY LESS IRKED but he still gets no lovin’. Side note: I love how he calls her “J.”