Shadowhunters‘ Simon Lewis has a brand new bag — of blood, that is.

Clary’s bespectacled bestie finally transitioned into a vampire on last night’s Shadowhunters, and while Simon might be repulsed by his new set of fangs, Alberto Rosende is thrilled that he finally gets to talk about it.

“It was really difficult to keep quiet for so long,” Rosende tells TVLine. “It’s such a big part of who he is for the entire saga, so I’m happy to talk about it incessantly for the next two months. It feels really good.”

That said, Simon has a difficult path ahead of him — not only physically, but also emotionally, as he adjust to the rules of life among the undead.

“One of the big things in the book, which we also see on the show, is when Simon realizes he can no longer say the name of God or enter a house of worship,” Rosende explains. “We haven’t touched on it much on the show, but his religion is very close to who he is. It really helps him define himself. So for him to no longer be an active part of that, it’s like his identity was stolen.”

Below, Rosende discusses the specifics of life as a vampire — including his favorite flavor of (fake) blood.

TVLINE | First of all, I’m glad they included Simon’s transition in Season 1. At first, I thought they might hold it.
I’m glad too, and I think they did it for a lot of reasons. For one thing, it gave Simon a bigger part in the shadow world. If Simon had stayed a regular mundane, it would have created even more of a separation between him and Clary; she’s spending so much of her time with the Shadowhunters. Although Simon is completely destroyed over becoming a vampire, I think a part of him is happy to be back in the same world as Clary. 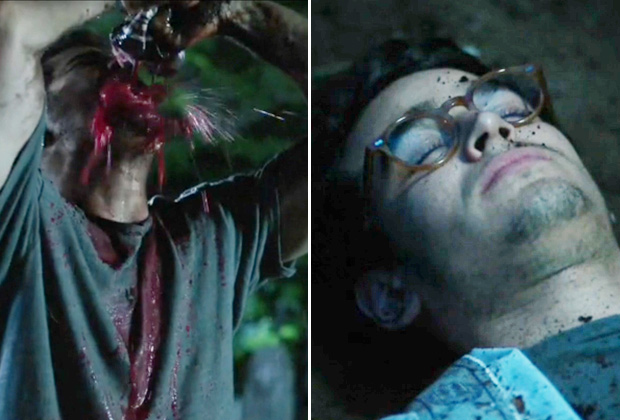 TVLINE | I’ve spoken to quite a few new TV vampires, and they all have an interesting relationship with fake blood. What’s yours?
Well, I loved the fake blood we used in that scene; it was pomegranate juice, so it tasted really good. For Simon, on the other hand, it was one of the grossest things he’s ever done, which is part of the reason why he was so disgusted with himself. … We used different types of blood throughout the season. There’s one that’s kind of like tomato juice — really chunky and gross. That one I was not a fan of in any way.

TVLINE | We saw some of his new abilities this week, but what major physical changes can we expect from Simon now?
In the books, one thing [Cassandra Clare] talks about is Simon having a new understanding of how the human body works when he’s dead. It’s almost like Simon’s in this stiff box, and he needs to learn how to move again. … Also, we’re saying goodbye to the glasses, because now he has this amazing vampire vision. Physically, he’s going through a lot. … It makes me think of that episode of Smallville where [Clark] becomes human, and he’s like, “I don’t have to worry about accidentally ripping a door off its hinges.” That’s what Simon has to worry about now. He can’t even walk in the sunlight; as far as his mundane life, he has no idea how to navigate that.

TVLINE | I love that you just made a Smallville reference, by the way.
Oh, Smallville‘s one of my favorite shows! I was such a big fan. Isaiah [Mustafah] is actually really good friends with [Michael Rosenbaum], and he was at our premiere party at McG’s. I kind of geeked out a little bit, like, “I’m meeting Lex Luthor. This is really cool.”

TVLINE | Wasn’t it weird seeing him with hair?
[Laughs] Yes, actually. I didn’t even recognize him at first. I was like, “Nice to meet… wait, this is Lex Luthor. Oh my gosh.” It was cool.

Your thoughts on Simon’s new life (so to speak)? Drop ’em in a comment below.