It’s a common belief shared by fans of The Vampire Diaries that, despite everyone else in Mystic Falls transitioning into some ungodly-yet-beautiful creature, Matt Donovan shall remain human for the rest of time. The same was also believed about The Originals‘ Cami O’Connell — and then last week’s episode happened.

“I didn’t think Cami was ever going to become a vampire,” Leah Pipes tells TVLine. “I thought she’d be human for life. I’m pretty sure [Matt’s portrayer] Zach Roerig is not happy to hear that I’ve turned; he and I really thought we were in this together. I was going to be the Matt of The Originals.”

That said, Pipes is ready to experience Cami’s next chapter — continuing Friday at 9/8c on The CW — having officially said goodbye to the “brave bartender” on Twitter. “She’s basically a whole new character,” Pipes adds. “I’m so excited to be playing her.”

Below, Pipes reveals how executive producer Michael Narducci told her the big news, what we can expect from “Campire” and, of course, which flavor of blood she prefers.

TVLINE | Set the stage for me: When and where did you find out?
Narducci just called and he said, “We have this plan for Cami.” I was, of course, expecting terrible news, so when I got great news, I was so excited. I actually jumped onto my couch, and I think I scared him a little bit because I screamed. I was just really excited about becoming a vampire.

TVLINE | Did he come right out and say that, or did he make you sweat a little first?
Actually, all he said at first was, “At the end of Episode 10, you’re going to die.” I’m like, “OK…?” And then he said, “But you won’t actually be dead.” Then I was like, “So I’m becoming a vampire?” And he said, “Well, she doesn’t want to become a vampire, so she refuses to drink the blood.” At this point, I’m just like, “So I am dying? Narducci, am I being fired or not? You just have to tell me.” 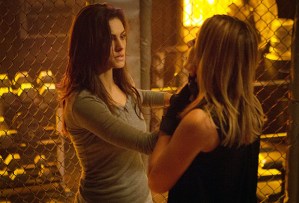 TVLINE | The CW put out a few pictures of Cami sparring with Hayley. Scenes like that must be totally new experiences for you.
[Laughs] Well, it was great to get my workout in while at work. By the way, it’s a real workout. They did not inform us that we were going to be breaking a sweat; they really wanted us to go after it. Little did they know, I break a sweat walking up a few stairs.

TVLINE | Now that Cami is also supernatural, might she and Hayley become better friends?
I think it’s complicated. All of Cami’s relationships that were once simple are very complicated because of this new phase she’s in in her life.

TVLINE | What about the ones that were already complicated, like Cami and Klaus?
Well, there’s no going back now. Klaus always tries to control the situation, but he’ll quickly realize that Cami — excuse me, “Campire” — is a forced to be reckoned with.

TVLINE | What about that scene last week where Vincent gave Cami his blood? Should I be looking at those two more closely?
They just have such a wonderful mutual respect for each other. It’s one of those rare relationships in New Orleans that’s completely based on trust. It might be the only one left that hasn’t been damaged by betrayal. But no, they’re just buds.

TVLINE | Did any of your co-stars give you advice about vampire life, like how to put the contacts in or how to deal with the fake blood?
I got the fake blood talk. It was more of a warning that the fake blood is not very delicious. There’s a flavor that’s good, then one that’s not good, and you’re supposed to ask for the good one. It’s cherry that’s the good one, not maple syrup. Also, if you swallow too much fake blood, you’ll get a stomach ache and a sugar rush — and eventually crash.

TVLINE | You just go up and ask for your blood every day, like you’re at a bar?
Yeah, kind of. You just go to the prop guys, and you’re like, “I’ll have cherry today. Thank you.”

TVLINE | Makes sense. Lastly, if vampire Cami was human Cami’s patient, what would she think of her?
Oooh… I think human Cami would be very scared of her. Vampire Cami is everything that human Cami is repressing in herself. And I think she’d see a lot of parallels with Klaus.

Originals fans, what are your thoughts on vampire Cami? Drop ’em in a comment below.