True story: Just a few minutes into talking with The Following‘s James Purefoy about his new Sundance series Hap and Leonard, I manage to inadvertently call attention to his receding hairline.

In my defense, said hairline is the subject of the very first bit of dialogue in Hap and Leonard‘s series premiere (airing Wednesday at 10/9c)… and it’s conceivable that the series had pulled a Pete-on-Mad-Men and shaved Purefoy’s locks away for the part.

Maybe the reason Purefoy is so laid-back is because Hap’s hairdo is the least of his worries: The character is a down-on-his-luck plantation worker who did time in federal prison and who’s having a tough time paying his bills.

Read on for more from The Following alum, including why he needed a little “sunshine” after playing the murderous Joe Carroll for several seasons.

TVLINE | There is a sweetness to Hap. Was his difference from The Following‘s Joe Carroll something you sought after a few seasons as that character?
I spent so long on the dark side with Joe Carroll. I needed f—king sunshine. [Laughs] That was a very intense show, that was a very intense relationship with [co-star] Kevin [Bacon], and [Joe] was so nihilistic and so self-serving. Everything was about Joe, nothing was about anybody else apart from him. So yeah, I think you just long for something that’s diametrically opposed to that. Hap is the opposite. Hap is somebody who is bruised and battered by life. He’s a very sensitive soul. He’s a good guy. He has a heart. He is in the best possible meaning of the word, a gentleman: He is a gentle man. 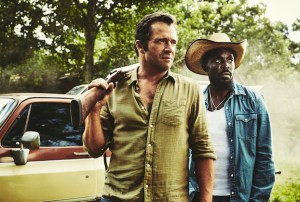 TVLINE | The relationship between Hap and Leonard is one that’s not seen often on TV. I know you and Michael had been friends and co-stars before. Did you both board the series around the same time?
I’d worked with Michael years ago on a project called The Philanthropist for ABC. So we kept the relationship going between then and now. Whenever I went to New York or I was in New York, I’d hang with him. I just enjoyed Michael’s company. He’s fun to be around. He’s a kind, wise and sensitive soul. I was packing up to go home after The Following, back to London, and he called me and said he was doing this show called Hap and Leonard, and he was Leonard, and how did I feel about playing Hap? Because the chemistry between the two guys is really important… Because we’ve had such a long relationship before, it just seemed to fall into place really easily. I wanted to work with him, and then I read the script.

I loved the script, I loved Hap, and as you say, he’s a gentle soul and you do worry for him because you know he’s going to be in trouble, because that’s the kind of show that you’re watching is going to be. S—t’s gonna go off, and you worry for him. They do have a hugely different relationship that you don’t normally see on TV. It’s not very macho, but I find it very real. I think a lot of people will recognize it, because it’s not amped up. 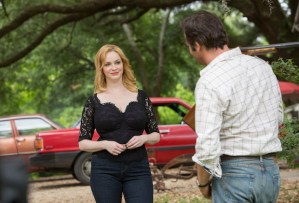 TVLINE | In the first episode, we see Trudy literally lead Hap into the bedroom by his fly.
[Laughs] I think, as far as metaphors go, that was pretty on the nose. [Laughs] Yeah, we’ve all got a girl like that in our lives — or a boy — somebody who, no matter how many times they walk over you, you can’t say no.

TVLINE | Talk to me about working with Christina Hendricks.
I love working with her. She’s super professional, she’s super good. She’s incredibly talented. Being as beautiful as that certainly makes things very easy.

TVLINE | How easy or challenging is the Southern accent for you?
A voice and an accent are two very different things. The voice of a man is how he speaks from his heart, right in the middle of him… And then you stick an accent on top of that. It’s not easy, if you come from the West Country in England, to do that accent. I will leave it to others — I’m sure there’ll be lots of people who’ll go, “What the f—k was he doing with that accent?” I did my best, and I actually like the way that he sounds. I do know that Joe Lansdale’s accent was a million times stronger than what we were allowed to do on the show… Television is famous for flattening s—t out.