Michael may have once again won over Jane the Virgin‘s heart, but his portrayer Brett Dier has some words of comfort for fans of his character’s main competition: “There’s no guarantee that Rafael’s out of the race.”

Although former lovebirds Jane and Michael appear to be on the road to reconciliation after confessing their feelings for each other in last week’s episode, their future is far from solid.

“I don’t even know if [they] will remain together,” Dier admits. “The show is so flippy. Once you get excited about something, it flips on its head.”

Nevertheless, Team Raf supporters should “give Michael a chance,” the actor argues. “He’s made some mistakes, but given the situation that he’s in — and it’s a pretty crazy situation — I think he’s dealing with it pretty well.”

Below, Dier talks about Michael’s struggle with Rafael, his changing relationship with Jane and his poop-y experience with Mateo. 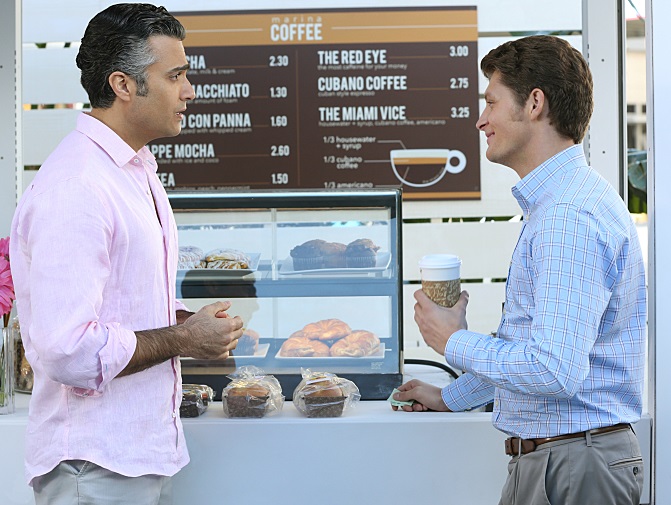 TVLINE | Which is sweeter: the reunion between Michael and Jane or Michael and Rogelio?
They’re going to be equally sweet. I can’t wait for people to see the bromance with Rogelio and Michael. It’s going to be better than ever.

TVLINE | Jane chose Michael over Rafael earlier this season, but there were complications that forced them apart. Are they able to put that in the past and move on together?
I don’t think so. They still have a lot of things to figure out. Also, there’s still the Rafael thing. Michael’s going to be seeing [him] all the time, and Rafael’s going to be seeing Michael all the time. There’s going to be that tension still that could cause problems. They’ve both got to get over their egos and really start doing some self-reflection. They can’t mess this up for [Mateo] and Jane. There’s a lot to think about it. It’s not going to be easy.

TVLINE | In our sneak peek from tonight’s episode (watch it below), Rafael is not happy to have Michael back in his life. How does Michael feel about Rafael at this point? 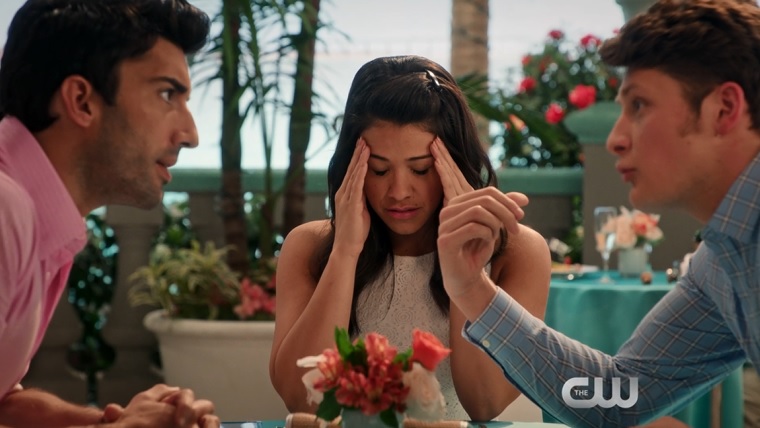 Honestly, Michael just wants to forgive him. Now that Jane said, “Yes, I still love you,” Michael’s got to leave all this stuff behind and really, really try and work with Rafael and be buds with him. Or not even be buds, but just [be] casual, with no drama. That’s something Michael is willing to do. But when there’s two egos clashing, it becomes hard.

TVLINE | The two men also have to work together on the Mutter investigation. How are they navigating that?
That’s also tough. [Laughs] It’s pretty awkward. There’s a scene where Michael and Rafael are in a car together, just the two of them. The tension is pretty intense. But at the same time, they have to reach some of kind forgiveness, eventually.

TVLINE | Michael hasn’t really been with Jane since she became a mother. How is he dealing with that aspect of their relationship?
It’s new territory for Michael, but it’s also super exciting. In the pilot, that was his plan, to have a kid with Jane and to start a family… It’s been a long time since the artificial insemination happened. So Michael’s reached a point where he can now figure out how to work with the situation and just be there for and love Mateo and Jane. I’m excited to see what Jennie [Urman], the creator, has in store for Michael and Mateo.

TVLINE | They say you should never work with children and animals. Have you had any crazy experiences on set with the babies who play Mateo?
Yeah, I did, actually. The first episode back in Season 2, Azie [Tesfai], who plays Nadine, was holding the baby. It was the scene where I have to give the chip back, and she hands me the baby in exchange. In the middle of a take, the baby actually pooped himself and you could hear it. It was like a really big explosion. It was hilarious. [We were] filming, so I hope that makes it into the blooper reel because I was laughing hysterically. Plus, I’m a big fart joke [fan]. I just love farts. They’re hilarious. [Laughs]

TVLINE | In the last episode, Michael found Sin Rostro strangled to death in the stairwell. Some of our readers speculated that maybe she’s not really dead, or it’s not really her. Is there more to that mystery than appears on screen?
There always is. She might not be dead, she might be dead. But I do know that it’s something that you won’t be able to guess. It’s too insane. I can’t even guess with the show, and it drives me a little bit nuts because I want to know.

Jane the Virgin fans, watch a sneak peek from tonight’s episode (The CW, 9/8c), then hit the comments with your thoughts on Jane and Michael’s future.