Even though Monday’s Crazy Ex-Girlfriend ended with a huge development — Rebecca and Josh kissed (!) and Greg, who’d finally admitted to himself that he was into the neurotic lawyer, watched it happen (!!) — let’s keep things in perspective.

“Our intention with the show was less to focus on the this-guy-that-guy and more to focus on the personal evolution of the characters,” showrunner Aline Brosh McKenna tells TVLine. Indeed, the hour also featured several moments of significant personal growth, both for Ms. Bunch (who faced down a childhood nemesis and took the high road in a legal battle) and other West Covinians we’ve come to know and love (looking at you, Darryl).

But forgive us for coming back to that courtroom clinch and which it might mean: After all, it looks like Rebecca might be about to get everything for which she’s schemed and planned since the beginning of the series. Read on as McKenna gives us the scoop on whether or not that’ll happen, what’s ahead for White Josh and Darryl and how the show snagged an Office star for a fun, musical cameo.

TVLINE | Josh and Rebecca at the end of the episode — this is a huge moment for them.
Huge.

TVLINE | He was really wary of her. He’s gone back and forth about what he thinks about her, so what happens now that they’ve kissed?
What’s interesting to me about it is she reverts to her final and best weapon, which is her brains and her job, which had never occurred to her until then. That’s the thing that finally gets to him. Also, it’s interesting that she actually has a sincere moment of her own coming-of-age and forgets about him for a second. She’s thinking about the fact that she’s no longer Audra Levine, that she is no longer the person that Audra Levine has been competing with her whole life. At that moment, her pursuit of Josh is a little bit on the backburner in favor of her personal evolution.

From there, we’re picking up on both those threads: where she is in her life and the kiss, which was unexpected, spins her back into her pursuit of Josh in a big way. Because basically the pursuit of Josh is a lot of carrot-and-stick… After the kiss, they have very different reactions to what happened because one thing that we know about him is that he is very conscientious and religious and thoughtful, and going forward, he’s going to have to deal with the ramifications not only on his relationship but also about how he feels about himself and the decision that he made.

TVLINE | That sounds like a lot of emotional heavy lifting for Josh that he may not be prepared for.
[Laughs] The thing about the show is that we always intended it to be this person makes a rash decision that has wide-ranging implications, not only for her but for everyone around her. And we’ve seen that her belief in him and her high opinion of him — you know, she has a much higher opinion of him than anyone in his life, including Valencia and including the people he grew up with — so the fact that she holds him in such high esteem and then also that she helps him embrace his community in the way she does in the court case, that’s very meaningful to him and it causes him to overlook any squeamishness he had at the end of the last episode. 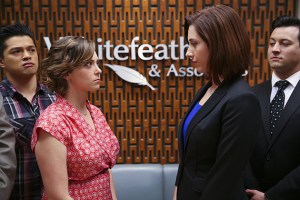 TVLINE | Will we see more of Rebecca trying to be a better person during the rest of the season?
All of these love story beats from our point of view are things that push all the characters toward examining who they in what point they’re at in their life, what matters to them, what’s important, what they value, what their future is. Those things are more important, actually, than who’s kissing who. [Laughs] So she’s done something here — I think it’s interesting that the second he kisses her is the moment she took her foot off the pedal and was not thinking about him… I love that he is drawn to her in this moment of her being so intelligent and noble. And she loses and he stands by her.

He’s also judging her by the fact that she didn’t succeed, that she isn’t perfect. He sees her as this incredibly intelligent, almost perfect person, even though he knows that she’s a little wacky. But in terms of her intelligence, he really values and understands that. So the fact that he sees that she is this intelligent, noble person but she doesn’t win all the time, he really relates to that and that draws him to her as well. The kiss kind of shakes everything out and it has to be rebuilt again… obviously for Greg, as well.

TVLINE | Let’s talk about Greg. Aside from the devastation on his face at seeing the kiss, I thought it was really interesting to watch him come to terms with his feelings for Rebecca at the bar — it felt a lot like the Christmas episode and how he realized he didn’t hate his mom. But he doesn’t seem like the kind of guy who’ll stay nice and wide open after such a blow. What can you say about that?
Yeah. It’s interesting — I was reading some online reactions; some people were really mad at him last week for colluding with Valencia, even though they’re kind of right to be suspicious of her motives. There’s a great line that he has in the 12th episode where he says, “She’s into him. Why can’t anyone see that?!” He’s torn… he’s able to see through her, but it doesn’t stop him from being drawn to her. That’s gonna continue to shake out — part of it. Santino’s schedule has been light in 11, 12 and 13 we don’t see him that much. But we start to see him a lot more, especially in the last few episodes of the season. We’ll see him a ton.

TVLINE | How did the B.J. Novak cameo come about?
I know him. We were sitting in the writers’ room coming up with that bit, and thinking of somebody who would be hilarious for that. He just came to mind as someone who would be really super willing to send himself up and spoof himself. So I just emailed him. I had gotten an email from him about the show; he was congratulating us about the [Golden] Globe and he was enjoying the show, and I was like, “That’s perfect.” He’s so super funny. 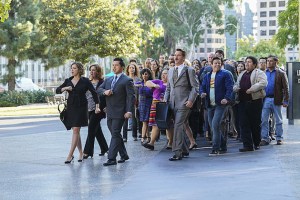 TVLINE | Did you run into any challenges shooting the rap battle or the Les Miserables-esque number at the courthouse?
That episode is a giant episode for us. It’s probably the musical number we’ve done since the pilot, and that’s because we didn’t know when we wrote it whether 13 was our last episode or not. At the time, we hadn’t gotten a pickup. So we write 13 with a big musical number and a climactic emotional moment for Rebecca and Josh thinking, “Well, if this is our last episode, then we go out with a bang.”

It was a very challenging logistical shoot because we had so many extras. And then the rap battle was just sheer fun. We were really so lucky to have found Rachel Grate, who is just exactly perfect for the person who is the antithesis but also the twin of Rebecca. And she just brings such pizazz to that part. We were really blown away by her. That won’t be the last we see of Audra Levine, for sure.

TVLINE | White Josh and Darryl’s flirtation is very sweet. Will we see that continue throughout the rest of the season?
The next few episodes are big for them. It was something we had been so excited, waiting to get to, and so excited that we finally got to write those episodes. There’s an amazing song coming up for Darryl that our brilliant songwriter Adam Schlesinger wrote with Rachel. We have a lot of fun stuff coming up for them in the next few episodes.