The day has finally arrived, Teen Wolf fans: Crystal Reed returns to the MTV drama tonight (9/8c) as Allison’s Beast-slaying ancestor Marie-Jeanne Valet, and Reed tells TVLine that the two characters share more than just a kind face and an affinity for bows.

“It was really important for me to interject Allison’s strength into Marie,” Reed says. “That was such a big part of her makeup, and it was something the fans really loved about her. So I wanted to make sure there was a through line there.”

Below, Reed reveals more behind-the-scenes secrets about her big return and weighs in on a few lingering questions — including whether or not Allison is really gone for good.

TVLINE | The fans have been rallying for you to come back from the moment Allison was killed. What did that mean to you?
It feels so good. Teen Wolf has such loyal fans. It never ceases to amaze me, just the level of loyalty and kindness and passion that they have. It’s really crazy. I’ve been traveling a lot since I’ve been off the show, and even in the most random countries, it’s the same level. It makes me feel loved and special. It’s a great ego boost.

TVLINE | And how did this return finally come about?
Jeff [Davis] approached me with this idea of the legend of the Maid of Gévaudan and how he wanted to intertwine it in the story. At the end, he said, “and this is the beginning of the Argent family,” and my heart sank. I was like, “Oh, this makes complete sense. And yes, I will do it, whatever it takes.” I knew how important it was for the fans to see her origin, and not a lot of actors get to do this, so it was absolutely perfect.

TVLINE | Can you believe how much has changed since you left?
We had a screening of the episode this past Saturday, and I was talking to Holland [Roden] about how much Lydia has changed, and in such a good way. What I’ve always loved about Teen Wolf is that the women are written so well with such great traits, and I love what’s happening with her character. It’s great to see, but I’m also like, “Oh man… everybody’s changing!” [Laughs]

TVLINE | When you watch the show now, are you able to follow what’s going on? I always have to turn to Jeff for answers.
There are a few basics that always stay the same on Teen Wolf, and then there are things that just are so crazy that I need to get clarification from Jeff. I listen to him talk and wonder how his brain works. I can see the cogs moving, and I just want to be inside there for five minutes just to get a glimpse of his brilliance.

TVLINE | Did you get a chance to walk through the old sets when you were filming this episode?
I did! Even pulling up to the stages was such a shock to me; it felt like deja vu all over again. They keep the structure of the rooms, but they change the interiors, so I walked by Allison’s room and I think they turned it into the sheriff’s office. My heart sank. Like, womp womp, she’s gone. [Laughs]

TVLINE | How difficult was it for you to nail Marie’s French accent?
I had about two weeks to prepare with a French accent coach, who really was my saving grace. She’s phenomenal, and she’s really great at working on nuances specific to the time period. She was also on set, so whenever I needed help with a pronunciation, we’d go over the line. That probably was the biggest challenge for me, which is also why I wanted to do it. 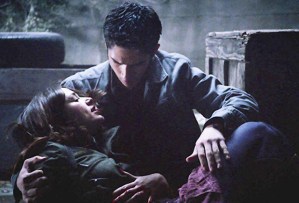 TVLINE | Time for a thinker: If Allison had survived the Oni attack, do you think she and Scott would have eventually found their way back to each other?
Oh, man, these are the questions that get me haters; I know there are people out there who are Team Allison and Team Kira. Really, in my heart, I believe that they would have.

TVLINE | While we’re on the subject, can you confirm that Allison is dead? The fans are hoping she’s still out there in the ether.
I can give no confirmation that Allison is dead. [Laughs] I can never say never, so who knows? The world of Teen Wolf is so crazy.

TVLINE | Did you take anything from the set when you first left?
Yes, I took Allison’s Chinese ring dagger! I was meaning to take her necklace, but wardrobe still has it. I did take loads of her clothes, though, to wear in secret.

Teen Wolf fans, are you pumped to see Reed back on your screens? And what are your theories, re: Allison’s fate? Drop ’em all in a comment below.