Warning: The following contains spoilers for The X-Files revival finale.

Just like you, we watched the final moments of The X-Files‘ revival finale Monday night with our jaws on the floor (and our hands tingling with the urge to strangle Monica Reyes).

Unlike you, we got to talk to series creator Chris Carter immediately after the episode aired. And because we are much more benevolent overlords than Cigarette Smoking Man, we’re happy to bring you the highlights of the conversation.

But first, just on the off-chance that hypnoregression therapy is messing with your memory/making you think you’re a Civil War soldier, a quick recap: When masses of people began getting sick with a variety of illnesses, Scully realized that the elusive men in power were trying to kill everyone via a “Spartan virus.” (There’s a lot more to explain there, but you want to get to the good stuff, right?) 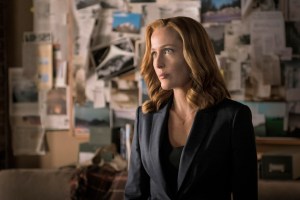 Eventually, Scully realized that her unique (read: messed-with) genetic blueprint was what was keeping her from getting sick, so she synthesized a vaccine from her DNA and started healing everyone. Meanwhile, Mulder — who’d tracked down Cigarette Smoking Man (who, we learned, was employing the former Agent Reyes as his right-hand woman) — refused to accept the baddie’s offer of salvation and was in very bad shape by the time Scully brought the antidote to him.

She theorized that he’d need an infusion of William’s stem cells in order to live… then a UFO appeared above them and shone its bright light right on Dr. Scully, who stared up in horror as the episode came to a cliffhanger close.

Read on to hear what Carter had to say about a Season 11, William’s whereabouts and why Mulder (an abductee himself) wasn’t immune to the virus.

TVLINE | Let’s say the planets don’t align and there are no movies and no more seasons — are you OK with ending the series on that note?
I can tell you this: Fox owns this show. I can’t imagine, with the ratings that we’ve got and the way we ended this season, that there won’t be more X-Files. They will find a way to get that done. Because I spoke about it briefly with [Fox CEO] Dana Walden today, so there’s an appetite there and… a chance certainly to find how we’re gonna get ourselves off this precipice.

TVLINE | We had that shot of Alien Scully at the end of the cold open, which Fox released weeks ago. Was that just to mess with us?
[Laughs] Well, if Scully believes that she has alien DNA, this is something that’s going on in her subconscious. She’s possibly as alien as she is human, and that was playing with that idea.

TVLINE | Between the first episode of the revival and the finale, Scully and Mulder feel as though they’re growing back together — maybe not romantically, but they seem to want to be in each other’s company again.
Yes. There’s tension there, because they love each other and have, I think, since the first season — maybe even from the moment they first met. There’s a tremendous amount of love and respect there. That is what still exists, even if they’re not back together, I think you saw through our six episodes a warming, a thawing of whatever cold places they’d both found themselves in. And when they are arm in arm, or hand in hand, walking in front of Mulder’s house there [in Episode 5, “Babylon”], I think that’s a moment, for me, of a thawing of the situation.

TVLINE | William was referenced in a bunch of the episodes, then again right before the cliffhanger. In your mind, do you know where he is and what he’s up to?
[Laughs] I can’t tell you.

TVLINE | Of course you can’t! But do you know?
Well, if anyone knows, it’s me.

TVLINE | Do you have a favorite scene or moment from the last six episodes?
I love the scene in the graveyard between Mulder and Guy Mann [in Episode 3, “Mulder & Scully Meet the Were-Monster”]. I just love it. Actually, lines come back to me when I’m just sitting and thinking about something, just Rhys Darby’s delivery of certain lines, I just love.

TVLINE | He was great casting in that episode.
Yes, and it’s funny: It was something we had to fight for. He wasn’t the network’s first choice. So I feel vindicated. I love Jim Wong’s directing in Episode 2. I love the Scully scenes, dealing with the death of her mother in Episode 4. I like Mulder’s wild ride, his placebo-mushroom trip in Episode 5 — but I also love that scene, the pietá on the boat, a vision of light in Hell. And Episode 1 engendered wildly different reactions, and I guess I loved that fact. And I love the cutting-edge science in Episode 6.

TVLINE | Scully takes on a very Mulderesque tone in this episode, and it occurs to me that we saw Mulder act very Scully-like in the episode where Maggie dies: being very supportive, just being there. Was mixing it up that way one of the goals of the revival for you?
We’ve done this before, this role-reversal, to really great effect. [Writers Glen] Morgan and [James] Wong did it so beautifully in the first and second season… But I think Scully’s seen too much now for her to always maintain her perfect bias and skepticism. They are prone to finishing each other’s sentences at this point.

TVLINE | Were there any fan nods you couldn’t get into the revival, like Mulder’s Knicks tee shirt in Episode 3?
It’s funny: I think we put everything I could think of in there. But there are always things you want to do and are unable to. There is something, but I can’t remember what it is. I was lucky to put the Lone Gunmen back in. We had to bring one of the actors all the way from Australia to do it. So that’s a case of actually getting what you want.

TVLINE | If there are more episodes, can I get a definitive answer on whether Scully will get a desk or not?
[Laughs] I don’t know — there is another little room there, so she might find herself in that cubbyhole-sized room with her own desk. Who knows? Maybe she will supplant Mulder now that Mulder is in such bad shape.

TVLINE | Speaking of… Mulder was also abducted at one point: Why is he not protected from the Spartan virus?
That’s a good question. And one that needs to be answered.