A very important woman from Harry’s past will disrupt his love affair with Joss on Mistresses‘ upcoming Season 4 — but, no, it won’t be his ex-wife Savi.

TVLine has learned exclusively that despite the ABC summer sudser moving production back from Vancouver to Los Angeles, Alyssa Milano will not return as a series regular to the role she played in Seasons 1 and 2. (Milano famously exited ahead of Season 3, citing her reluctance to uproot her two young children and separate her family.)

The door remains open, however, for Milano to make a guest appearance later in the season, according to a show insider.

Meanwhile, Tabrett Bethell (Legend of the Seeker) will bring some single-and-childless mischief to the mix when she returns to the now series-regular role of Harry’s sister Kate. 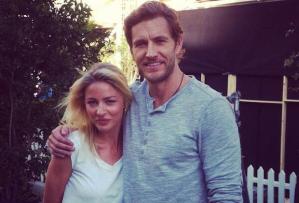 Fans might recall that Bethell’s Kate appeared once before, in a Season 2 episode where Harry considered moving back to Australia and taking over the beachside seafood shack he loved throughout his childhood. Her return presumably fills a “fourth mistress” void created by the show’s decision to make Jennifer Esposito’s Calista a “one-year character.”

We hear that Kate will return from Down Under in search of love, but find it in all the wrong places — a fact that will cause tension between herself and Harry (Brett Tucker), herself and Joss (Jes Macallan), and even Joss and Harry. But that drama won’t prevent her from becoming integrated into the core group of women, including Yunjin Kim’s Karen and Rochelle Aytes’ April.

Mistresses‘ Season 3 finale ended with Harry boarding a plane to shoot a food-based reality series alongside real-life celeb chef Rocco DiSpirito, while an unhinged Wilson (dressed as his imprisoned/suicidal fashion designer boss Calista) pointed a gun at Joss, and hissed, “Where you goin’, lovely?”

Savi, meanwhile, hasn’t been seen since the Season 2 finale, when she discovered sister Joss in a steamy beach embrace with Savi’s ex-husband Harry.

Bummed that Milano’s Savi won’t be back in the Mistresses‘ inner circle? Excited about the return of Kate? Hit the comments with your thoughts!