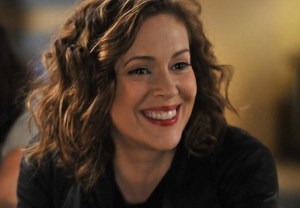 Mistresses may be sans Savi when it returns for its recently ordered Season 3 next summer.

Hours after ABC announced that the summertime sudser had been renewed for another cycle, star Alyssa Milano shared on both Twitter and Facebook, “Sadly, I won’t be returning to #Mistresses,” followed by a link to her personal website, where she offered this explanation:

After two wonderful seasons in Los Angeles, the studio has decided to shoot Season 3 of Mistresses in Vancouver, Canada for financial reasons. It’s with a heavy heart that I have decided that I can’t relocate.

I have two babies under 4. Being a mother and wife comes first, and I just can not uproot my children and separate the family by moving away.

I will miss this job desperately and wish everyone the absolute best.

Milano’s publicist has confirmed the postings as legitimate, while multiple setside sources have confirmed for TVLine the actress’ decision to leave.

Mistresses Season 2 closed with Milano’s character on the verge of finding ex-husband Harry and her sister Joss in a passionate embrace. Teasing the fallout, exec producer K.J. Steinberg told TVLine, “If and when Savi finds out, it will destroy her. But that’s if and when.”

Can the show go on without Savi? How would you write her out, if Milano is in fact walking away?