It wasn’t exactly Thelma and Louise careening over a cliff with the top down, but the finale of London Spy gave us its own bittersweet car scene — one that’s probably as close to a happy ending as you could expect from BBC America’s somber, meditative spy tale/gay love story.

Before we discuss our feelings about Danny and Frances winding up in their unlikely driver/shotgun positions, let’s recap how they got there. 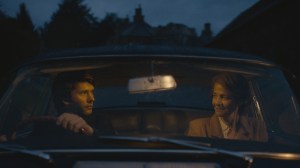 In the wake of Scottie’s tragic staged suicide last week, Danny finds himself alone in wanting to expose the truth about Alex’s “End All Lies” software – a sort of facial-tic recognition program with the potential to detect fibs from spies, government leaders and all sorts of other dangerous types who like to play their cards close to the vest. (No wonder the U.S. Russia, England, France, China and Saudi Arabia were all aligned in their efforts to destroy this research.)

Danny, naive as ever, prints out reams of Alex’s data, three-hole punches and binds it, and mails it (not even via Fed Ex) to dozens of leading publications — only to find they’ve been deposited in Scottie’s empty garage (and replaced with blank pages) the following day.

Knock-knock… it’s Danny’s estranged parents at the door, but it turns out whoever killed Scottie has also threatened them into meeting with their son, and (if I made sense of it all) using a hidden device in a camera to wipe clean the flash drive Danny’s carrying around his neck. “I always wanted to know — wouldn’t it have been easier to love me?” he asks his parents flatly, as he heads for the exit. His mother’s response — “I can’t say why we never did” – is chilling, but hardly the worst example of parenting we’ll see before the hour is over.

After baring his soul to his HIV support group, Danny finally hops in his car and drives out to Alex’s deeeeeeeply austere childhood home, where his father spouts welcoming bon mots like  “What good can it do?!” from the end of the hallway, and mother Frances puts her usual weird limits on her interaction with Danny: “I’ll permit a question — but just one.”

OK, nobody really talks like that — or nobody would agree to that when he’s come to get answers about the mysterious murder of the man he loves by some terrifying multi-government alliance — but we’ll let it slide. 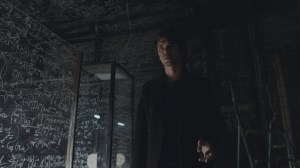 After some hand-holding by the fire, Frances admits she blames Danny for Alex’s death — then walks Danny to Alex’s soul-crushing room of blackboards where he clearly spent half his childhood working on complex mathematical equations. We learn that Frances adopted Alex from the housekeeper who wound up being Alex’s nanny — with the intent of training him to be the spy she and her husband never could. But dammit, the kid grew too smart, and while she tried to warn him “End All Lies” would be the death of him, he wouldn’t listen.

“I tried to save him,” she explains — and then, finally, she spills the truth about her son’s death and why she blames Danny. On the night Danny and Alex were meant to go on their weekend getaway, she was called to her son’s apartment — where a team of interrogators had already locked Alex in that hellish trunk. Frances pleaded with him (without so much as cracking open said trunk!) to destroy his research, fly to America and create a new identity and sever contact with everyone he ever knew, but despite his agreement, his captors used his own technology against him, realizing he had no intention of keeping his promises — especially as they pertained to abandoning Danny. And just like that, Frances got sedated and Alex was left to suffer an unspeakably awful death. Far fetched? A little. But the whole sequence was so claustrophobically terrible I didn’t question its logic ’til the action broke for an ad break. 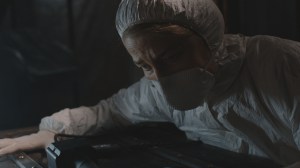 Yep, true love — and a dedication to his work — killed poor Alex in the end. And you thought Tinder/Grindr/OK Cupid were the worst mashups of romance and technology known to mankind!

Back to the present day, Alex’s nanny/birth mom flees the room and then sets the family labyrinth ablaze. Danny is more determined than ever to try to find someone who’ll believe the truth. And Frances remains unyielding in her belief that one pawn can do anything to stop the global powers at play.

“Just a stupid boy,” sighs Danny, as Frances closes the door to her mansion. But as he climbs in Scottie’s car to drive away, she pops in alongside him, smiling for… maybe the first time in the history of London Spy?

“Let’s mow them down for real,” she says. “You’d probably better hurry.” And then, she says what Danny and all of us know in our heart of hearts: “You understand we don’t stand a chance.” But both of them are smiling nonetheless.

What did you think of the London Spy finale? Grade it in our poll, then expand on your thoughts in the comments!