When the X-Files revival was first announced, I assumed we’d see our favorite FBI agents on the hunt for the unknown. I figured we’d witness an alien or two. I hoped we’d get a banter-filled car ride or a truly disturbing monster of the week.

But never in my most far-flung, John Lee Roche-influenced dreams did I expect to watch Mulder lose his tie, don a cowboy hat and pelvic-thrust his way through “Achy Breaky Heart.”

And yet, here we are.

What’s next? Skinner in a tutu? Scully ditching it all to become a long-haul trucker? After that bizarre (yet highly enjoyable) second-to-last episode, I feel like the finale could go anywhere and do anything — and I’m incredibly intrigued to see how this whole shebang turns out.

Even the addition of Agents Miller and Einstein — a development I was primed to hate, because nobody puts Mulder and Scully in a corner! — felt believable and worked well within the confines of the hour. (Note to Fox: This does not mean I endorse a spinoff.)

Let’s review what happens in “Babylon.”

NEW KIDS ON THE BLOCK | In Southwest Texas, two Muslim men pray in a car, then walk into an art gallery. Moments later, the place blows up.

Back in D.C., Mulder and Scully watch video of people allegedly hearing trumpet sounds from out of nowhere. (Think angel choruses, not polka.) This leads to a discussion of the Bible’s Book of Revelations and the end of days, a friendly back-and-forth that ends when someone knocks at the basement office’s door.

“Nobody here but the FBI’s most unwanted,” Scully says, making Mulder smirk. “I’ve been waiting 23 years to say that.” (Heh.) “How’d it feel?” he asks. “Pretty good,” she answers.

Special Agents Miller and Einstein come in and introduce themselves; they’re there because they’re working the Texas terrorist bombing. One of the attackers survived — barely — and is on life support; Miller, who like Mulder is both slap-your-mama handsome and inclined to believe in ridiculous things, wants help communicating with the unconscious bomber in an attempt to locate his terrorist cell and prevent another attack. Einstein, who like Scully is a redheaded medical doctor who thinks all of this is nonsense, thinks the whole thing is a waste of time.

SEEING DOUBLE | It’s apparent from the get-go that Miller and Einstein are Mulder and Scully 2.0, not only in their identities but in the way they interact with each other. Let me amend that. They’re Season 1-era Mulder and Scully: Mostly respectful and collegial, sometimes prickly with each other’s tendencies, earnestly (naively?) searching for the truth.

Like I said, I expected to despise the new pair… but then I didn’t. Maybe it’s because the episode is still very much about the X-Files OGs, with the newbies used more as a way to highlight how far M&S have come rather than a cloned unit designed to replace them.

Anyway, both partnerships subtly observe the other — Scully notes that Einstein calls Miller by his last name, too; Einstein posits that Dana is “clearly in love with” Fox, because “nothing else would explain” her sticking with him for so long (heh). Einstein also says she pities Scully, a sentiment Miller can’t understand: “It’s like my dream assignment.” Talk to me after your sister levitates out her bedroom window, kid.

STRAIGHT TRIPPIN’ | Mulder and Scully both eventually volunteer to help with the investigation: Scully because she’s interested in communicating with the dead/near-dead (in light of her mom’s recent passing) via brain imaging, and Mulder because he wants Dr. Einstein to get him a hallucinogenic that will help him commune with the comatose bomber.

Scully and Miller get to Texas first, where a pair of Homeland Security agents order them out of the room — but Red and the new kid refuse to leave. Einstein and Mulder show up later, with Einstein eventually acquiescing and giving Mulder the ‘shroom-esque drug he wants just as a bomb threat evacuates the hospital.

There are a lot of menacing men in suits and a ‘Murica-loving nurse who tries to kill the bomber by shutting off his life support, but Mulder still manages to pop the pill into his mouth while standing by the patient’s bedside… and then he disappears. 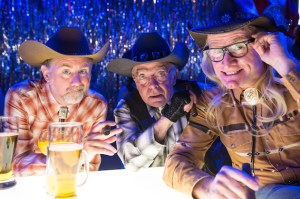 Cut to Mulder strutting down the hospital hallway, and then out into traffic and a honkytonk bar, all finger-guns and high-fives and white man’s overbite while Miranda Lambert’s “Somethin’ Bad” rocks out in the background.

Warning: This sequence may not be your cup of sweet tea, but I found it so bizarre and yet so immediately awesome that I replayed it several times while watching this screener. Mulder dances. Mulder gyrates. Mulder wears blinged-out knuckle rings that proclaim “MUSHROOM” and bros out with Skinner and the Lone Gunmen (!) to “Honky Tonk Badonkadonk.” And eventually, after a brief interlude in which a dominatrix’d Einstein hits him with a riding crop, Mulder winds up riding near the bomber — laid out in a pieta — in a Viking-style rowboat captained by Cigarette Smoking Man.

Mulder leans near to hear what the dying man is saying… then wakes up in a hospital bed, his boss by his side. Aww, it’s like “Triangle” all over again, and for a moment I fervently wish Mulder’s going to confess his love for Skinner this time. (Alas, no dice.)

CHECKOUT TIME | The bad news: Einstein ratted Mulder out. The good/weird news? The pills she gave him were simply niacin, aka “a placebo,” the younger agent informs him. Still, Mulder insists that the dying terrorist said something important to him in Arabic during the trip.

And that is born out when the bomber’s mother shows up at the hospital and Mulder recognizes her as the woman cradling the man’s body in the Viking boat. With her (and Miller’s) help, Mulder remembers the Arabic he heard in the dream-or-whatever-it-was; the words translate to “Babylon Hotel.” The FBI raids the place, finding several men preparing for another attack, and all is well.

Miller and Einstein have a little wrap-up, but it feels too much like the lead-in for a spinoff, so I’m going to pretend it doesn’t happen. And Mulder listens to The Lumineers’ “Ho Hey” on his porch and looks happy when Scully shows up for a little discussion about love, hate, children (oh, William better be a part of this finale) and… I’m sorry, they’re holding hands and looking cozily couple-y and what were we talking about again?

And thank you, Fox and Dana, for illustrating my point: While Einstein and Miller’s closing scene felt like the million ­X-Files-lite series that have popped up since the iconic sci-fi drama began, this bit on the porch is the real deal. And as our pair walk and talk about religion and OH MY GOD WHY WON’T THEY JUST KISS THEY SO CLEARLY MISS AND LOVE EACH OTHER, he — but not she — hears trumpets in the sky, just like those people in the videos at the beginning of the episode.

Now it’s your turn. What did you think of the episode? What would you like to see in the finale? Sound off in the comments!