The Flash flipped its world upside-down with Barry’s arrival on Earth-Two, where both Caitlin and Cisco are evil and Iris is the “Detective West” tasked with wrangling metahumans.

As the CW hit’s well-watched walk on the wilder side continues this Tuesday at 8/7c, TVLine invited Candice Patton to share her reaction to Earth-Two’s Iris (“This is everything that I have wanted”), preview “nerdy” Barry’s rise to the occasion and reveal how a “seed” is planted for the future of Earth-One’s “WestAllen.”

TVLINE | When did the buzz first start hitting the set that this visit to Earth-Two was coming down the pike?
I think it might have been a few episodes before we started shooting, that we knew we were definitely going to Earth-Two. But I don’t think people knew which characters were going, which doppelgängers would show up… so we were all kind of speculating in our heads — “Am I going? Will there be a doppelgänger of me? Am I going to be a villain? Will I be the same kind of person?” The possibilities are really endless on this how, so you can imagine our minds were just making up all sorts of stuff!

TVLINE | Had there been any whispers about what the other Iris would be like?
No — and I’m an actress who doesn’t really dig for information. I don’t call up [showrunner] Andrew [Kreisberg] and ask what’s going on. I kind of just let it unfold as it unfolds, so by the time I finally got the first draft of the script, I texted Andrew like, “You’re kidding me. Earth-Two Iris is a badass cop??” He was like, “Pretty cool, huh!” I thought, this is awesome, this is everything that I have wanted for Iris. For me, it was one of the coolest episodes I’ve gotten to play with and shoot.

TVLINE | Did it raise your eyebrows more that she was a cop, than married to Barry?
I think both were a bit shocking. I mean, Barry and I, our thing has always kind of been there, we’re always alluding to the possibility of that — the newspaper says we’re married in the future. Them being married on Earth-Two kind of gives this idea that Barry and I are always connected, no matter where we find them.

TVLINE | When the Earth-Two TV reporter mentioned “Detective West,” I was like, “Hold on a minute, we could zag a bit” — and I was excited when they did.
Yeah, I never would have imagined they would go in that direction because our Detective West on Earth-One is so great. As a result, I felt a bit of responsibility [Laughs] in trying to recreate another kind of kick-ass Detective West.

TVLINE | Do I see you 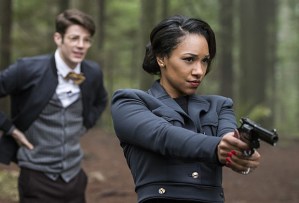 carrying yourself differently as Earth-Two Iris because of that? I feel she has a bit more swagger.
Absolutely. I wanted her to be as strong as her father is on Earth-One. I wanted her to feel very tough and unapologetic and… not hardened. but she has an exoskeleton to do the kind of work that she does. There were days on set that were hard for me, shooting scenes with Floyd Lawton and having Barry in the room, and then there’s me as Detective West…. It was an unusual difference for me now being the “alpha” in the room. It was kind of uncomfortable to play at first — our [“Welcome to Earth-Two”] director, Millicent Shelton, had to come over to me a couple of times and say, “You’re on the right track. Be fierce. Be dominant.”

TVLINE | What can you tell us about Earth-Two’s Barry that we don’t know yet?
I don’t know that I can tell you anything that you don’t already know, but he’s absolutely adorable! [Laughs] He’s absolutely adorable. And it’s sweet because he and Iris are just complete opposites. He’s a bit more reserved and conservative and buttoned-up, and she’s quite aggressive and I’d say even very sexual and proactive….. It’s nice to see how these two opposites really attract on Earth-Two. [This week], you’ll see that Earth-Two Barry, while he is very nerdy and shy and a bit reserved, kind of rises to the challenge. He wants to work alongside his wife to go find Earth-One’s Barry, even though he’s terrified. He wants to do this for Iris and show her that he’s got her back.

TVLINE | What is Iris to make of the showdown she just witnessed, with Killer Frost, Deathstorm, Reverb and the assorted doppelgängers?
She’s a cop so she’s used to metahumans like Killer Frost and Deathstorm, but to have Cisco be there and then his doppelgänger show up, and then this Flash that she has never seen before…. It’s a lot for her to cop brain to process. But it’s just another day on Earth-Two! 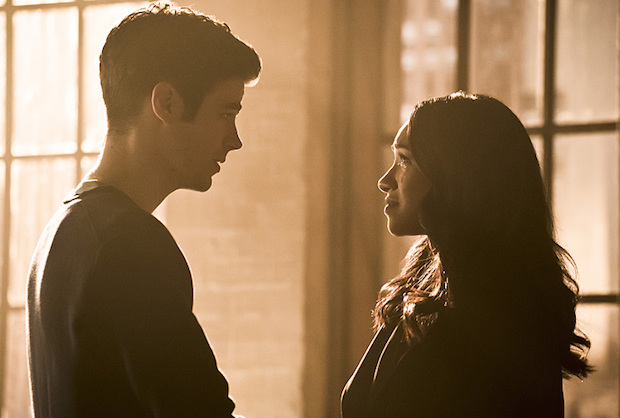 TVLINE | Might the events on Earth-Two ultimately have an effect on Earth-One’s Barry and Iris?
Yes — in the sense that there’s almost a seed planted, at least for Iris. This idea that they are married on Earth-Two and supposedly married in the future makes Iris start to wonder if maybe they are truly destined to be together.

TVLINE | Meanwhile, back on Earth-One: What is Iris up to?
This is the introduction of Scott Evans (played by Tone Bell), her new editor at Picture News, and he’s very anti-Flash. He wants Iris to write a piece on how The Flash may not be the hero everyone thinks he is, which is quite the conflict for her, so she kind of negotiates with him: “Instead, what if I write a piece about this other Flash that’s out there fighting Geomancer?” So she heads over to S.T.A.R. Labs to talk to Jay and Caitlin to try to write a piece about him instead. All the while, they get into the thick of the terror that is Geomancer.

TVLINE | I loved that moment you had a couple weeks ago, strong-arming the guy who runs Wally’s street races. Iris really put her investigative skills to use. Will we get more of that moving forward?
I hope so. I can’t say that it’s heavy as of now, but we keep dabbling in it here and there. Every time we do, I relish those scenes, because that’s Iris West. She’s an iconic reporter and it’s [played] so heavy in the comic books. So I’m hoping for more of that, too. Hearing the fan response from Earth-Two, I think people love seeing Iris have agency and have the aggression to go after what she’s concerned about. They want to see more of that on Earth-One.

TVLINE | Are we done with Wally’s drama? Is that sorted out for the most part?
In terms of us being at odds with each other? I think so. I think we’ve dealt with that. Wally’s a kid, still, so he’s always going to be getting into trouble and doing things that Joe and Iris may not think are the best. I think as far as the family dynamic goes, we’ll finally start seeing a unit with those three — four with Barry. They finally embrace each other as a family and can move forward.

TVLINE | What has it meant to you, this past year-and-a-half, to have such strong, passionate support from the WestAllen fans?
Oh, man…. I don’t know if there are really words to describe it. I try not to read too many comments, but when I do it’s overwhelming support — even on days where sometimes you don’t feel it. The haters can be… they can really get on your nerves, I guess. I don’t mind people talking badly about me or whatever; it’s when I feel like it has to do with race that really kind of bothers me. So, having WestAllen supporters and people who are out in the world who are progressive and are willing to see storylines like that really makes me feel better about our society as a whole, that we can have that kind of relationship on television, that we can send positive ideas to young people watching our show. It’s important that we keep moving in that direction on our show.