Thank you, Grace Dixon, wherever you are, for imbuing your family’s line with enough grit, determination and unwielding “Oh hell no” to get your descendants out of some very tight spots.

Because, as Abbie herself notes in this week’s triumphant Sleepy Hollow, she’s been stuck in Purgatory, marooned in the 1700s and isolated in Pandora’s creepy catacombs, yet she’s always managed to find her way back — thanks, of course, to a healthy assist from her fellow Witness. Girlfriend is resourceful; there’s got to be something in her at the cellular level that keeps her going in situations that would send most of us directly into the fetal position.

Though Ichabod and Agent Mills are sort of in each other’s presence for most of this week’s episode, I’d bet a handle of Barbadian Best Amber rum that most of you were waiting for the big payoff at the end of the hour, when the pair finally reunited in their own realm. I know I was, and the moment didn’t disappoint.

But I’m getting ahead of myself. Let’s review what goes down in “Incident at Stone Manor.”

ALONE AGAIN, UNNATURALLY | We pick up with Abbie, who’s getting her bearings after waking up on the dirty floor of what looks like a cave, with the Eye of Providence — not looking so scary now — on the ground beside her. She calls for Crane but soon realizes she’s alone. And as she steps to the cave’s opening and peers out at a barren, rocky wasteland, the camera pulls back to show us just how massively screwed she is.

But our girl soldiers on. She traverses the landscape day in and out, scrawling a map of the terrain on her cave’s wall. She sports an impressive head of natural hair. And she talks to herself, a lot, often in Crane’s voice.

During a chess game played against (fake) Crane on an improvised board, Abbie begins to see and hear her fellow Witness in the cave with her… and immediately suspects that she is losing her mind. “Please be real,” she whispers to the hazy Crane figure materializing near her, Nicole Beharie packing a whole lotta vulnerability, hope and fear into three words.

SPIRITED AWAY | What we know is that Crane, Abbie and Joe have built a spirit cabinet (read: confessional with fancy curtains) designed to help one astral project his or her soul onto other planes. Jenny provides the otherworldly GPS that’ll help them locate her sister: family items including Grace Dixon’s journal, a necklace Abbie gave Jenny and… a cigarette lighter Jenny pilfered — with an oblivious Joe’s help — from her father’s study at the beginning of the episode. (Side note: Nice to meet you, Ezra Mills, even if it was just for a few seconds!) 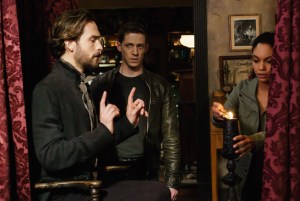 Ichabod enters the cabinet, Jenny reads an incantation, and Crane is off! Well, his spirit is; his body just sits there, looking like he nodded off after a big lunch. But don’t worry: A nearby candle will draw him back when it burns to the end.

Just then, Sophie arrives at the archives looking for Ich’s help with a gargoyle that’s come to life and killed a man. Jenny and Joe offer their services instead — Jenny less willingly than her boyfriend —  and the trio leave Ichabod chillin’ in his cabinet.

STONED | I’m gonna shorthand that gargoyle storyline, cool? Basically, the stone baddie is left over from when Gen. Howe unleashed all the demons on the Colonial Army, and a coded document in the Marquis de Lafayette’s papers — featuring a cameo by a sword-wielding Betsy Ross — helps Jenny, Joe and Sophie defeat the beast with a mix of holy water and the fastest-drying concrete known to man. In the end, despite some epic side-eye and some flat-out bitchery, Jenny concedes that Sophie helped and maybe isn’t so terrible after all.

ADIOS, EYE | In the other realm, Abbie runs to hug Ichabod but grabs only at air; because he’s not physically there with her, they can’t touch. He informs her she’s been missing for weeks. “Weeks?” she says incredulously. “I’ve been here 10 months, Crane.” After they ascertain that time moves more quickly in her neck of the woods, Abbie adds that it’s always daytime and she doesn’t seem to need to eat, drink or sleep — though the monotony is damn near killing her.

Crane notices that there’s ancient Sumerian writing (like that on his tablet) on the wall of her cave and that it references The Hidden One. Before they can glean much, though, Mrs. Hidden One herself astral projects in to ruin the party. Pandora promises to release Abbie from the “catacombs” in exchange for the Eye — and when Abbie refuses to give the all-powerful trinket to her, Pandy cuts Ichabod’s spectral tether, damning him to an eternity of floating around the spirit realm.

Abs is done in by this development, but she knows that giving Pandora what she wants is a no-go. So she smashes the Eye, realizing that doing so damns her to act out her one-woman show Clan of the Cave Abbie for the next gazillion years or so.

ABBIE BOOKS HER ONE-WAY TRIP BACK | Once Pandora leaves, Abbie remembers something Ichabod said about a cutlass she found in the wilderness outside her shelter: It belonged to Betsy Ross, who certainly did not die there. Reasoning that if Bets could escape, so can she, Abbie pretends to think the problem through with Crane until she reaches a solution: She’ll use some hefty vines to lower herself through what seems like a giant stone well. And by calling to Crane and focusing on their bond, she’ll bring him back to the real world with her.

It makes sense — as much as anything on this show makes sense — but when Abbie flashes through scenes from their friendship and then surfaces in the river, she’s alone. And when she strolls back into the archives, a very shocked Jenny and Joe are happy to see her but worried about Crane, who’s still in a fugue state in the box… and the candle is out.

CONSCIOUS RE-COUPLING | What transpires next isn’t quite at the level of that final scene from “The Sin Eater,” but it’s close. Abbie asserts that Ichabod isn’t alone, “Not ever,” and she pulls his soul back to the here-and-now by the power of their partnership. When the candle flickers back to life and he comes to with a giant gasp, she’s holding his hand. “I heard your voice,” he says, dazed. “I followed it.” I’m sure he says other stuff, but all I can focus on is the hand sex unfolding on my screen at the moment. The Witnesses are clutching at each other and it’s pretty great, even if you’re not down with this particular ‘ship.

“In the catacombs, I didn’t get the chance to tell you,” he breathes, and everyone hangs on what might come out of Crane’s mouth next… until he spouts off about chess. She swats at him playfully, and the moment is well-played by all but particularly by Tom Mison, whose devilish look at Abbie is perfection.

Perhaps I’m making more of that glorious hand clasp than is strictly necessary, but what did you want? For them to just high-five and get a beer after thwarting the laws of gods and physics? Also, on a housekeeping note: When Pandora fails her husband in the catacombs, she returns and allows him to suck most of her power out of her, leaving her literally crying blood.

Now it’s your turn. What did you think of the episode? Did you enjoy Joe and Jenny’s quick explanation — complete with Crane impression — of how their investigations usually go? How are we feeling about Sophie as part of the team? Sound off in the comments!