Warning: The following contains spoilers from Tuesday’s The Flash

Your eyes were not deceiving you during The Flash‘s trip to Earth-Two on Tuesday: over there, Cisco is — gasp! — evil, Barry and Iris are married, and some of the biggest superheroes are just a phone call away. 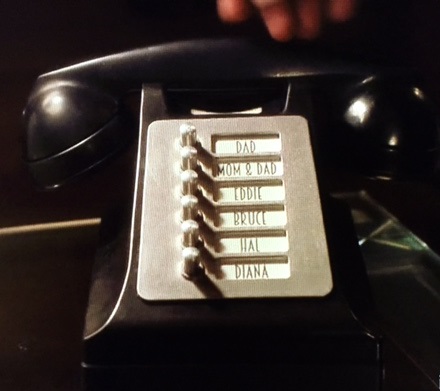 But don’t read too much into the fact that Bruce, Hal and Diana (aka Batman, Green Lantern and Wonder Woman) are on Barry’s speed dial. They’re just Easter eggs — of which there were many in the hour, including shout-outs to Aquaman’s Atlantis and Supergirl.

“We had a giant board of probably 50 ideas, and we had to just whittle them down,” executive producer Aaron Helbing shares. (Feel free to hit the comments and try to ID all the ones that made it to air! Who spied the Legion ring, as previously promised?)

Below, EPs Aaron and Todd Helbing talk about how the speedster will handle being hitched to Iris and what Earth-Two’s Reverb reveal means for Cisco. They also preview alt Barry’s “pivotal” role in next Tuesday’s conclusion. 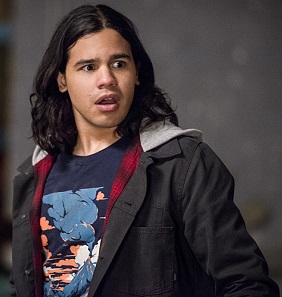 GOING TO THE DARKSIDE | After meeting his Earth-Two self – a villainous metahuman named Reverb who works for Zoom – Cisco discovered that he has potential abilities beyond his wildest dreams, and one day, they may come to fruition. After the moment “Cisco saw the magnitude of the powers that he’s capable of, anything’s possible now,” Aaron Helbing teases.

BEHIND THE CELL | Even though he has captured The Flash, Zoom’s plan to steal his speed is far from ready to be executed. “He doesn’t have all the ingredients,” Aaron Helbing explains. “We established earlier in the season that he needed other aspects of other people to help the process.” Meanwhile, imprisoned Barry will start to form a relationship with Harry’s daughter Jesse, just as her father and Cisco seek out help from a very unexpected source in order to rescue their loved ones, Todd Helbing previews. You may have also noticed a masked man opposite Barry’s cell. He is “there for a reason,” the EP hints. As for the Big Bad’s identity, it “starts to unravel” over the next couple episodes. 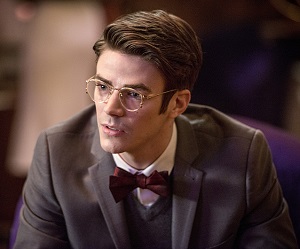 A TALE OF TWO BARRYS | If you’re bummed about not getting to see much of Earth-Two Barry, fret not, there’s plenty of the “very entertaining” doppelganger in the next installment, Todd Helbing promises. “He’s quite a bit different,” the EP describes, noting that the character was originally intended to have a Jimmy Stewart quality. “We really just gave Grant [Gustin] a few ideas, and he took it upon himself and created this amazing guy. It’s hilarious. It was an interesting juggle between this very dire circumstance and then this very funny Earth-Two Barry,” who also plays “a pivotal role” in helping the other Barry.

MR. AND MRS. ALLEN | Knowing that he and Iris are happily wedded on Earth-Two “affects [Barry] quite a bit,” Todd Helbing previews. Their relationship “really sits with him. That’s going to be on his mind quite a bit in upcoming episodes.” (Could it also be the “much bigger thing” that Barry has to tell Iris?) 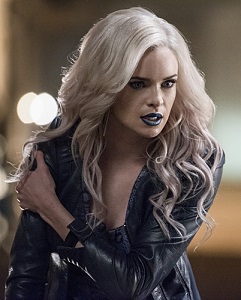 IS IT COLD IN HERE? | Just because Caitlin fulfilled her comic book destiny by becoming Killer Frost on Earth-Two doesn’t mean the Ms. Snow we know won’t take an icy turn. However, “right now, she’s not affected,” Todd Helbing notes. “For that to happen, there’s going to have to be some scenario that would trigger that. Right now, it’s not a possibility.”

Flash fans, what did you think of the show’s journey to Earth-Two? Whose doppelganger was your favorite? Sound off in the comments!