Following up on last week’s big cliffhanger, Tuesday’s Pretty Little Liars revealed Aria’s dad to be guilty… of being in love!

Proving that all my hand-written letters to Marlene King have been well-received, Byron shared the secret he’s been keeping from Aria: He and Ella (my OTP) are back together. And the only thing that made me happier than that news was Ella’s comment about how hard it is to get a hold of Mike, who’s “never in his dorm room anymore.” Maybe Ella should hop a plane over to Beacon Hills to see what her son’s really been up to.

(Speaking of couples going strong, I’m glad to see that “Spaleb” is still firing on all cylinders, despite everything that’s happening around them. Here’s hoping that whatever Caleb finds in Yvonne’s “Hastings opposition research” folder doesn’t change that.)

And then there are the duos I still can’t quite read, like Emily and Alison. I got a rush of those old-time “Emison” feelings when Ali offered to take Emily to her egg-donating procedure — and even more when they held hands in the hospital room — but following Emily’s allegation that Sara Harvey attacked her after surgery, I don’t know what to think. Was it all a hallucination, or is Alison, who claimed to have been in Emily’s room the whole time, secretly working with Sara? (Stranger things have happened on this show.)

Also suspicious of Sara, Aria and Spencer snuck into her room at the Radley in the hopes of tying her to Charlotte’s murder. And although they didn’t necessarily get their hands on the smoking gun, they did discover that Sara’s hotel room used to be Charlotte’s room when Radley was a sanitarium. And what’s with that secret exit? (There’s always a secret exit.)

* Emily and Hanna’s conversation about whether or not Byron and Ella will remarry has me wondering: Whose wedding are we going to see this season?

* I feel like Hanna’s post-high school life would make the most compelling spinoff, though Spencer’s could give it a run for its money. (That said, “I’m very into Asians, they’re incredibly chic” might be the most ridiculous line ever spoken on this show.)

* This is, hands down, the most phenomenal “A” threat of all time: 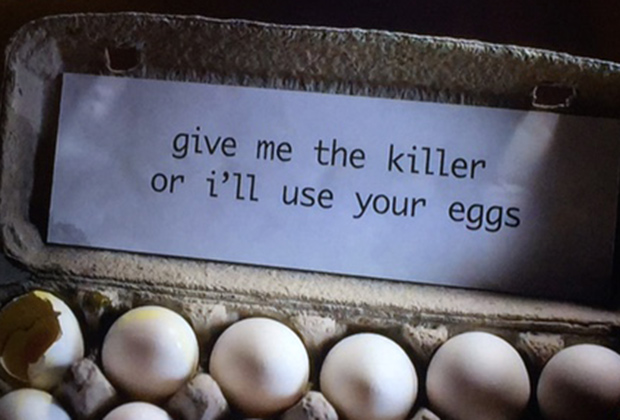 Your thoughts on this week’s episode? Any new theories? Drop ’em all in a comment below.