Even by Teen Wolf standards, Monday’s midseason finale was a lot to take in.

TVLine spoke with executive producer Jeff Davis about how the episode’s biggest twists will affect the second half of Season 5, but first, a quick recap of the hour’s most important moments:

Parrish was discovered to be a hellhound; Liam struggled to accept the loss of Hayden; Braeden returned (!) with some bad news for Malia about the Desert Wolf; and Theo, who was revealed to be the Dread Doctors’ original creation, formed his own pack by reviving the fallen chimeras at the Nemeton.

Now that we’ve gotten all of that out of the way, it’s time to find out what’s next:

TVLINE | Not gonna lie, I never would have thought to guess Parrish was a hellhound.
I’d heard that several people online had guessed it, and I was really happy to see that. We laid out quite a few clues, so we were hoping the clever ones would get it. [Editor’s note: I’m not one of the clever ones.] The first clue was the Wild Hunt in 501, which was known to be connected to black dogs and hellhounds.

TVLINE | Lydia’s research also mentioned “Devilish Riders.” Will those be seen in Season 5B?
[Laughs] You’ll have to wait and see, but that’s definitely something that’s come up in the writers’ room. 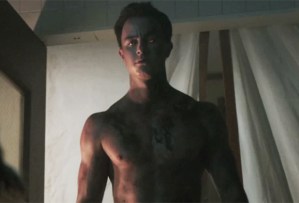 TVLINE | We’re still not sure if we should qualify Parrish as being “good” or “bad.” Will that also be explored?
Yes, you’re going to discover that he’s not necessarily one or the other, but he definitely has a place in the supernatural system of Beacon Hills. The reason he took the chimera bodies is that they were abominations; he was doing the supernatural clean-up work, essentially. Now that that’s out in the open, he’ll discover exactly what he’s been doing and what his role is.

TVLINE | Parrish’s hand-holding with Lydia was one of the first times they connected outside of his hallucinations. What’s their relationship right now?
In a way, they’re unconsciously bonded together by their supernatural powers. They’re drawn to each other, and whether that becomes something romantic and realized has yet to be seen. It’s all been in Parrish’s mind, but it hasn’t happened in real life. That’s something the writers have been flirting with all season: Are they, or aren’t they? That first moment where Lydia takes his hand in the jail cell is her acknowledging she has feelings for him, as well.

TVLINE | That’s a relief, as was Braeden’s return.
It’s funny, because we’d been writing her in for several episodes. She was supposed to return in Episode 7, but it didn’t quite fit, so we moved her to Episode 8, then 9, and finally, we got her in Episode 10. It’s a dance by the end of these episodes, where to place certain characters, but we’re very happy to have her back. You’ll be seeing quite a bit more of her in Season 5B.

TVLINE | What can you say about Braeden and Malia’s plan of attack for the Desert Wolf?
They’re definitely in league together. Malia told Stiles to give up the search, and she erased the Desert Wolf from his board, which she did because she wanted to find her herself. Braeden is the mercenary who’s going to help her find the Desert Wolf and take her down. … I can say that Episode 514, which we’re breaking now, is a big Malia episode. She’s a big part of 511, then 12 and 13 are a step back for her to let things simmer, and then 14 is all about Malia.

TVLINE | I’m also worried about Sheriff Stilinski. He wasn’t looking so hot at the end of the episode.
You should be! Episode 511 deals a lot with Sheriff Stilinski and the fallout from those injuries. It revolves are Scott and Stiles’ desperate attempts to save his life. 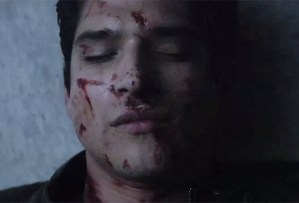 TVLINE | Speaking of Scott and near-death experiences, he was technically dead for 15 minutes. How will that change him?
He’s going to come back a different person. A lot of this season was about Scott failing as a leader, and how he’s learned from those failures. We’re going to see an older, wiser Scott in the second half of Season 5.

TVLINE | It feels like it’s going to be Scott’s pack vs. Theo’s pack in 5B.
Yeah, they’re definitely going to be going up against each other. It’s partially about the other dangers in Beacon Hills. It’ll be an epic, cataclymic, clash of the Titans that’s abut to happen, and they’ll be caught up in it.

TVLINE | I imagine Hayden being a part of Theo’s pack will create some interesting conflict between her and Liam.
Yes, because she’ll be drawn to both. She’s drawn to Liam because she’s in love with him, and she’s drawn to Theo because she believes he can protect her.

TVLINE | I also feel like a lot of parallels were drawn between Hayden/Liam and Allison/Scott. Was that intentional?
Some of it was, yeah. One of my favorite shots from this season is when Scott’s in the locker room in Episode 7, watching Liam and Hayden fall in love. The camera moves to him and he’s got this look on his face as if he wants to tell Liam, “You have no idea what you’re in for.” But it’s different because Hayden is now powerful, whereas Allison was human. We’ll see Hayden getting used to that power when we come back for the second half fo Season 5.

TVLINE | I’ve missed Kira these past few weeks. When will she be back?
She’ll be back soon. We’ll see her in Episode 12.

TVLINE | Lastly, about that drawing the Dread Doctors discovered at the end of the episode… Can you offer any hints?
There’s a French word that the Doctors are repeating over and over. I can tell you that Season 5B is a clash of titans, and both of the titans in that [drawing] are … well, one of them is somebody you already know. The one surrounded by fire.