This Tuesday on The Flash (The CW, 8/7c), Barry, Cisco and Harry — upon arriving on Earth-Two to rescue Jesse Wells from the ominous Zoom — get a chilly reception from that world’s version of Caitlin Snow, who is known as the villain Killer Frost.

Sure, she’s got Ronnie at her side again (here as the baddie Deathstorm), but the love of a not-so-good man apparently could not keep the scientist from heading down a dark, cold path. Here, Danielle Panabaker previews her walk on the wild side, Killer Frost’s beef with Barry and the breachers, and what nice Caitlin is up to back home during the two-part trip to Earth-Two.

TVLINE | Under what circumstances do Barry & Co. first encounter Killer Frost?
They lock eyes on each other in an unexpected situation. When Barry Allen first comes across Killer Frost, I don’t think he’s expecting to see what Earth-Two’s Caitlin Snow looks like.

TVLINE | Who has the strongest reaction to seeing her? I imagine Cisco has something to say.
As always! [Laughs] Barry and Cisco are both pretty shocked.

TVLINE | Is Caitlin’s relationship with Ronnie pretty much the same over there? Or is it a bit more lusty, more bad girl/bad boy…?
It’s a little bit more “Bonnie and Clyde.” There’s the same amount of passion, and they do love each other the same as on Earth-One. They’re just evil! They just like to hurt people and steal from them.

TVLINE | Aside from the new look and different temperament, how would you compare Earth-Two’s Caitlin with the one we know?
It’s more  a contrast than a comparison. I don’t know that they share that much in common other than they love a guy named Ronnie. She also has some pretty great quips throughout the episode. She is smart and she is pretty loyal… but that’s probably all they do have in common!

TVLINE | So, what kind of bee got in her bonnet over on Earth-Two that triggered her origin story? She’s still got Ronnie, so she should be happy as a clam, right?
That’s actually not something that we really explored in this first exposure to Killer Frost. It’s The Flash, so we’re telling his story and witnessing his general his shock at seeing Killer Frost, and how she looks not like the Caitlin on his Earth. 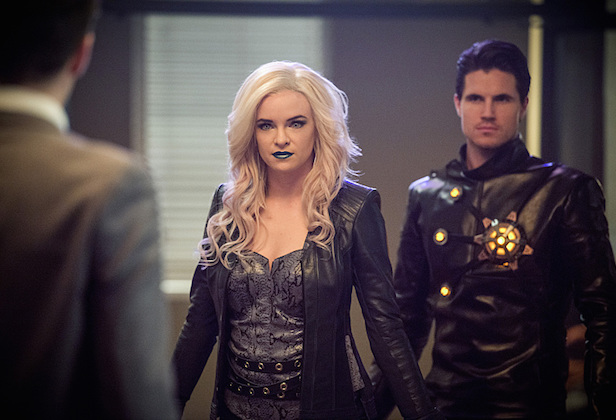 is her origin story something the show’s writers have confided in you on the side?
We’ve talked extensively about Earth-Two’s Killer Frost. I think that after the episode, after you see her relationships with people like Zoom, you’ll begin to understand her a bit more.

TVLINE | What sort of threat does she pose to our Earth-One friends?
[Laughs] She poses a very serious one! She’s not happy to see them, so she sort of goes on a hunt. She uses her powers to try to attack them.

TVLINE | What kind of skills does she have?
A lot of what we see in this week’s episode is her use of icicles, how she can shoot them from her hand. She has control over ice and in [next week’s episode] we see her explore her powers a bit more.

TVLINE | What was it about her look, her costume, that most got you into character as you started playing this variation on Caitlin?
Gosh, it’s a lot of different things. I mean, the wig is pretty transformative. The make-up is so different — the dark lip, the blue, the really pale face. But I think it’s the contacts that take it to another level.

TVLINE | Do you have a favorite scene?
Theres a scene in a lounge that I think is pretty cool….

TVLINE | Among Earth-Two’s assorted changes and flourishes, what entertained you as an actress just looking around the set?
I like that it’s a bit retro. Theres a classic element to it that just looks cool. I feel very lucky that everyone on our show is so talented that we were able to pull off so many different looks. Earth-Two is so completely different than Earth-One, so I’m really excited to see it all come together. 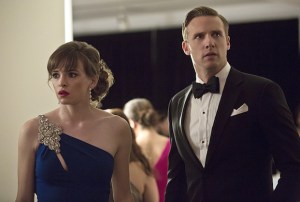 on Earth-One, Jay is going to try fill The Flash’s shoes. How does that go for him? How does he possibly pull that off?
It’s a challenge, for sure. Team Flash is so used to working with Barry and his set of skills, and Jay obviously has his own knowledge and his own experience from Earth-Two, but it’s a little different since he doesn’t have the speed.

TVLINE | Do you think that what Caitlin is feeling for Jay is real? He’s not just a rebound guy?
I do think it’s real — and I think it surprised her, I don’t think she was expecting it or looking for it, and there’s something sweet about how slow their relationship has been to progress. It’s fairly innocent, but I do think she cares for him.