Question: Will we see Arrow’s Felicity continue to struggle with being in a wheelchair, or has that all been resolved? —Jenny
Ausiello: Though Felicity seems to have navigated many of the early bumps — presentation to the Palmer Tech board included — “We will definitely feel the weight of it” in episodes to come, showrunner Wendy Mericle told Matt Mitovich. “There’s a big decision she and Oliver are going to make at the end of [Episode 413, airing Feb. 10], and it will inform a journey in 414 and 415 that she goes on with respect to how she’s going to handle being in a relationship, from the point of view of somebody who’s in a wheelchair. It’s a very small thing, but it is powerful and it is very emotional.”

Question: Your Gilmore Girls articles have been a-mah-zing! I’m loving it! Thanks for being you! —Kelly
Ausiello: No, thank you, Kelly, for being the kind of individual who appreciates good journalism when she sees it. We need more people like you in this world. Oh, hey, speaking of G’Girls, I asked Kelly Bishop if she thinks Emily will ever be able to make room in her life for another man, and I saved her answer for Ask Ausiello on the off chance one of my readers complimented me on my coverage. Bishop noted that the first of the four 90-minute episodes, titled “Winter,” suggests that “four months” have passed since Richard’s death, adding, “So by the time you get to [Episode 4 aka ‘Fall’] a whole year will have passed. And I know from my experience, that the first year [after losing a loved one] is awful. But when you hit that first year you start to emerge from it.” In other words, if a new gentleman were to enter Emily’s orbit, it would likely be in “Fall” — which, as bad luck would have it, happens to be the one script Bishop hadn’t gotten around to reading (yet).

Question: The Walking Dead returns in a week. A little tease or two, please? —Tonya
Ausiello: Not only does the midseason premiere boast what may be the series’ most intense montage ever, it also allows an extremely unlikely pair to step up and play hero. 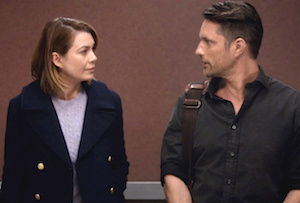 Question: Anything on Grey’s Anatomy? Does Meredith survive the attack?! (Just kidding.) —Danielle
Ausiello: Ha. Funny. (Just kidding.) Martin Henderson tells me that there will be “a shift in the dynamic” between Nathan and Meredith during the second half of the season. “Meredith and Nathan’s working relationship is very compromised because of the aspersions on my character that Owen’s casting,” the Grey Sloan newbie tells me. “So I end up defending myself and start revealing a little bit more than I wish to to Meredith, and it reorients her opinion of me. She tries to reconcile that with what Owen is saying and realizes that there may be more to me than Owen would have her think.” Um, OK, they’re totally making out by the season finale. Right, Marty?! “People are going to naturally assume that, but whether that’s a foregone conclusion in Shonda [Rhimes’] mind I sincerely don’t know,” he maintains. “I know that she loves more than anything to fool you, so I think she’d be happy to have you believe that’s the case and then change it just to keep you wanting it or not wanting it.”

Question: How long will Castle and Beckett fake this separation? — Barry
Ausiello: It officially comes to an end in Episode 816 when Kate moves back into Rick’s loft. But as previously teased in Matt’s Inside Line, her happy homecoming hits a tiny snag when she encounters the new lady in her man’s life — Aubrey Plaza’s Lucy. Let’s just say the two of them don’t exactly hit it off. BONUS SPOILER: I’m hearing 818 is a big Hayley episode.

Question: Will this be the final season of The Good Wife? —Mo
Ausiello: I don’t know. What I do know is this is the final season Makenzie Vega will be playing a high schooler. As such, a March episode finds Grace and Alicia meeting with a counselor at a prospective college who is eager to discuss a problem with her admission. Hmm…. Grace did mention needing to bring up her grades a few weeks back…. BONUS SPOILER: I can confirm that Alicia will be back working at LL&L in the next new episode on Feb. 14. Exhibit A: The photo below. Exhibit B: This sentence from the episode description: “Alicia has trouble adjusting when she returns to work at Lockhart, Agos & Lee with Lucca.” Case closed. 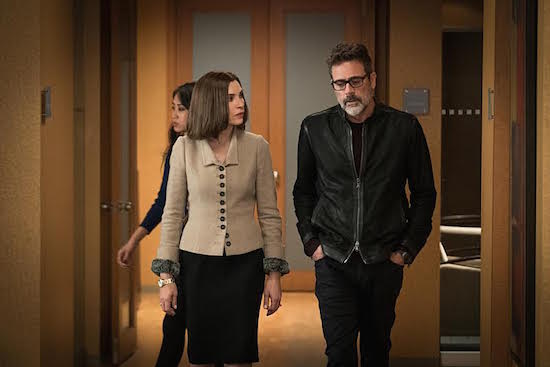 Question: Could you give us some information about The Blacklist? — Kiley
Ausiello: Episode 17 will introduce us to the recurring character of Harper, a smart, no-nonsense 30-something who works as a mercenary for an unknown employer — and she just might become a love interest for someone on the FBI task force. Per the official casting notice: “Military-trained with an unshakable moral code, she’s a natural leader who prides herself on her work. Attractive but guarded due to a troubled past, beneath her tough tomboy exterior is a huge heart — if she’d ever let anyone see it.”

Question: Oh, almighty Ausiello, hear my plea and alleviate my plight. Please tell me anything Grimmy so that I could rest in peace. —Farsia2010
Ausiello: I hear a new character named Bonaparte — a smart, driven 50-something woman who believes she’s the leader of a great cause and with whom you do not want to mess around — will show up pretty soon and stay for a while.

Question: Can we get any scoop on whether or not Grimm‘s baby Kelly is going to get any kick-ass power because, after all, his half-sister is kinda kick-ass? Thank you. —Koumamo
Ausiello: We asked executive producers David Greenwalt and James Kouf that exact question. “He’s too young,” Kouf said, laughing. “He’s not even eating solid food yet!” But Greenwalt hinted that Nick and Adalind’s offspring might start to show otherworldly tendencies “in the next handful” of episodes. 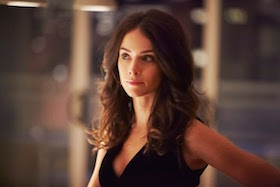 Question: Gonna go out of left field here, but do you have any scoop on Suits? —Jenny
Ausiello: Abigail Spencer’s Scotty is back in next Wednesday’s episode as the firm looks to her to do “something to help them,” executive producer Aaron Korsh previews. “But she is a little resentful of [Mike’s] secret, so she’s not going to have the greatest response to that.” Harvey’s ex will also have what sounds like a tense exchange with Rachel. “Both of their two men are in the crosshairs here,” the EP explains. “They have an interesting, little interaction where they get to express different points of view on what the consequences of this whole thing might be.”

Question: Any scoop on Sleepy Hollow and what’s new in regards to Ichabod and Abbie, our two Witnesses? How long will they be separated? —Frederick
Ausiello: Allow me to act like Crane and piece the clues together. First, there’s this photo from the Feb. 12 episode, which may or may not be of Abbie. Then, there’s my strong sense that the show won’t keep its very charismatic leads away from each other for too long. Finally… there’s this line, direct from the Feb. 19 episode’s official synopsis: “As Abbie, Crane and Jenny struggle to find normalcy, The Kindred reemerges as a new threat.” Now, I’m no Ichabod, but I suspect the Witnesses will be reunited very soon.

Question: I’m still not over Cristela’s cancellation, so I’m looking forward to Carlos Ponce on Devious Maids. Anyone else we can expect? —Carla
Ausiello: I can’t promise that any other Cristela alumni will pop up in Beverly Hills, Carla, but I can share some intel about two new characters appearing in Season 4: First up in Genevieve’s hairdresser Fabian, a self-proclaimed “hair magician” who gives his best client a strange book he swears will change her life. (Do I smell a cult?) Also recurring in Season 4 is Josefina, the mother of newcomer Daniela. She arrives on the scene with the intention of bringing her star-crazed daughter back to Puerto Rico to become an accountant.

This AAnd That…
♦ I’m hearing Griffin Grey will make his Flash debut this April. Casting is currently underway. 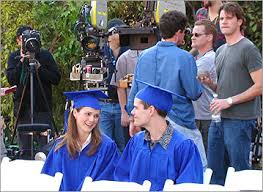 ♦ Scott Foley will make his Scandal directorial debut with this season’s 16th episode, which begins shooting on Feb. 12 and will presumably be Jake-lite. Hey, that reminds me of the time Scott directed me in an episode of Felicity and, despite the fact that I was literally seated next to Keri Russell at her character’s college graduation (see photo, right), he figured out a way to cut pretty much my entire body out of the scene. Hope that doesn’t happen to anyone on Scandal! (Yep, still not over it.)
♦ Felicity is headed to Shondaland! No, not Emily Bett Rickards. Or  Keri Russell. This is a new Felicity. Allow me to explain: Rhimes’ midseason drama The Catch is adding a character named Felicity who is sophisticated, cruel, ruthless and British. Paging Charity Wakefield!
♦ Silicon Valley‘s third season, bowing April 24, “picks up right where Season 2 ended,” co-star Kumail Nanjiani reveals. “There is not a time jump.” In the wake of Richard’s firing as CEO of Pied Piper, “Things really change for the crew,” Nanjiani adds, hinting that “big changes” are coming.

END QUOTE
“The hospital is on a Hellmouth.” —Grey’s Anatomy‘s Caterina Scorsone discussing the endless tragedies that have rocked Grey Sloan over the past 12 years (including next week’s attack on Meredith).